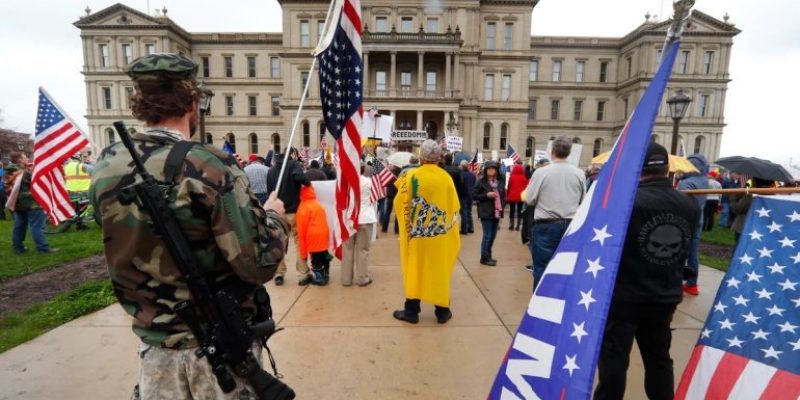 A growing rift between Governor Gretchen Whitmer (D-MI) and state legislators has turned into a public showdown as armed protesters showed up to the state capital on Thursday followed by the Michigan House of Representatives voting to sue Whitmer on Friday.

The State Senate previously voted to revoke some of Whitmer’s emergency powers after she announced that lockdown measures would be extended through the end of May.

Whitmer did not take kindly to the rebuke saying, “Of course, I will veto bills that they send over to limit the executive power. I’ve been very clear about that from day one.”

Whitmer’s most recent executive actions have been met with armed protesters descending on the Michigan state capital on Thursday followed by the State House’s approval of legislation to empower the Speaker of the House to file suit to stop the Governor’s abuse of power.

“We have to be prepared to take the next steps should she not accept her offer of partnership. We have three branches of government; the executive, the legislative and the judicial. They all have their role, even in a pandemic and this may be one where we get the third branch of government involved.”

The State Senate has approved a similar bill empowering Senate Majority Leader Mike Shirkey (R-MI) with the ability to file suit against Whitmer as well.

“The Governor of Michigan should give a little, and put out the fire. These are very good people, but they are angry. They want their lives back again, safely! See them, talk to them, make a deal.”

The Governor began receiving backlash after expanding lockdown measures to include a ban of all “non-essential” product sales which include fishing, traveling from home to home, seeds for planting, American flags, and more. Governor Whitmer more recently extended the Nation’s most strict stay-at-home order through May 28.

Gov. Whitmer is among a handful of Governors, mostly Democrats in swing states, who are under growing scrutiny for their over-the-top handling of the COVID-19 pandemic. Time will tell what impact this conflict could have on the presidential election in November.

Other states facing a similar public outcry include Wisconsin, Pennsylvania, Kentucky, Virginia, Minnesota, Louisiana, and California. U.S. Attorney General Bill Barr has warned states about going “too far” in curbing civil liberties saying that the Department of Justice may have to intervene.