The headline above wouldn’t seem to be all that shocking, seeing as though doing something about auto insurance rates was the single most animating issue in last year’s legislative elections, resulting in the most conservative and heavily Republican legislature in modern Louisiana history. If passing a tort reform package couldn’t be done with the current group installed at the state capitol, then it would never happen – at least not until a new governor would take office.

But there is a lot of doubt that turning a bill like SB 418, the Omnibus Premium Reduction Act of 2020, into law can be done when John Bel Edwards is certain to veto it. It’s not enough just to pass that bill, or HB 9, its twin in the House, with a simple majority. It’s going to need a veto-proof majority.

But yesterday on the Senate floor, that’s exactly what SB 418 got…

Here was the final tally… 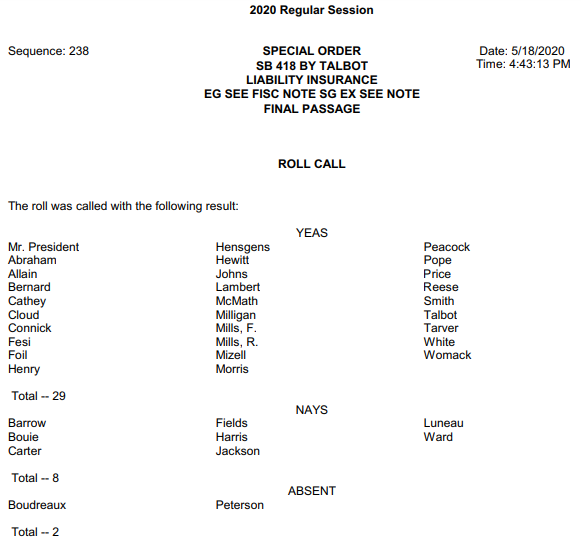 All 27 Republicans voted for the bill, which was expected. What was not expected was that it picked up a little bipartisan support as well, as Democrats Gary Smith of LaPlace and Ed Price of Gonzales crossed the aisle to support tort reform.

There are now 67 Republicans in the House. To make either HB 9 or SB 418 veto-proof will require adding three more votes out of the two independents or the 35 Democrats in that body.

That isn’t assured, but it’s doable. Proponents of the package are extremely optimistic after yesterday’s vote. Here was LABI’s Stephen Waguespack…

“This legislation is long overdue. In voting to support this bill, Senators today stood with families and business owners across Louisiana who overwhelmingly support improving our legal system and lowering our car insurance rates. The COVID-19 pandemic has created an unprecedented economic crisis and now more than ever, our working families and job creators can’t afford to keep paying the hidden costs of Louisiana’s ‘tort tax.’ This bill enacts smart, common-sense legal reform that brings Louisiana in line with the rest of the country and ensures that our state’s drivers no longer have to pay the second-highest auto insurance rates in the nation. We look forward to continue working with a broad, bipartisan coalition of legislators and stakeholders to get this legislation to the governor’s desk.”

What’s interesting here is that Edwards’ people put in a lot of work trying to keep Senate Democrats from flying the coop, including, we understand, personal phone calls lobbying them to vote against the bill. We also understand that’s happening in the House, where there were a dozen or so Democrats crossing the aisle to vote for last year’s tort reform package.

So far there aren’t any House Democrats who have publicly come out in favor of HB 9 or SB 418. The House’s leadership is comfortable in saying they’ll have at least a handful by the time the bills come to the House floor.

HB 9 passed out of the House Civil Law committee on an 11-5 vote. It’s set for floor debate in the House tomorrow. Look for a furious battle over the persuadable Democrats on the bill over the next 24 hours.

UPDATE: A correction – there were three Democrats voting for the bill, not two. We missed Greg Tarver from Shreveport as a “yes.”

We also missed Rick Ward, the Republican from Port Allen, who was a “no.” That’s our mistake – we should have known Ward would oppose tort reform. We regret that error.