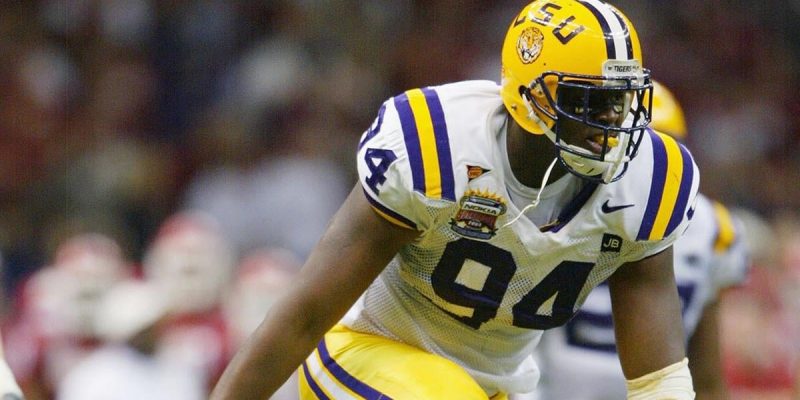 LSU fans may remember him as the gigantic defensive end chasing down quarterbacks—with a cross made of white athletic tape at the center of his facemask.

His crushing blow of Oklahoma quarterback Jason White is still one of the iconic images of LSU’s 21-14 national championship win over top-ranked Oklahoma in the 2004 Sugar Bowl.

His name—Marquise Hill. He was one of five 5-star recruits of head coach Nick Saban’s legendary 2001 class, a group ranked No. 2 in the country. That class, which would win two SEC titles and that 2003 national championship, has largely set the tone for the next two glorious decades of Tiger football.

The 6-7, 295-pound Hill, a five-star defensive end out of De La Salle-New Orleans, was found dead on this day, 2007, a day after he was reported missing following a jet ski accident on Lake Pontchartrain.

For two seasons as a starter in Baton Rouge, Hill was a fearsome force at the defensive end spot opposite Marcus Spears. He finished his career with 108 tackles, 17 for loss, plus 10 sacks. He skipped is senior season after the Sugar Bowl victory and was selected by the New England Patriots in the second round of the NFL draft.

While he never made a splash in the NFL, Hill’s contribution to society went beyond the football field. He was considered a hero willing to help others till the very end of his life. The woman who survived the jet-ski accident with Hill couldn’t swim, but Hill was instructing her, as he drifted away sadly, to stay calm, to not fight the strong current, and to let it take her to a buoy he found behind her.

She did what he said, and it saved her life. He reportedly drowned in the powerful, swirling currents in an area where a deep shipping canal runs, perhaps dizzied by a concussion, according to the Orleans Parish coroner.

“He was a hero until the end,” his cousin, Elaine Hill Blackshire said. “He made sure he got her to safety. I’m just so sad that he lost his life, but he wouldn’t have had it any other way. If he had saved himself, and knowing she couldn’t swim, he couldn’t have lived with himself. He thought of others first. He was just that kind of person.”

After turning pro, Hill continued to spend time working out at LSU, even after his head coach Nick Saban had moved on to coach the Miami Dolphins and Alabama Crimson Tide. People said he was a fun friend to be around, one always making them laugh. He was also a role model for current LSU players.

“Off field he was a really kind person, kind of like a gentle giant,” said teammate and quarterback Matt Mauck. “And not only for LSU, but for New England and everyone who got a chance to meet him throughout his life, everyone has to be extremely saddened and disappointed to hear the news.”

“His presence meant a lot for some of the younger guys. He gave them someone to look up to, and he was always there for them,” LSU spokesman Michael Bonnette said. “Here’s a 6-foot-6, 300-pound guy, as intimidating as can be, and yet every time you approached him he always welcomed you with a big old smile. In between the lines, he had his game-face on, but outside the lines, in the community or in the weight room, he was always smiling and having a good time.”

The coach that turned LSU’s football history around, the man whose shadow was finally eclipsed by Ed Orgeron and the greatest team ever last season, had this to say about his former recruit and star player:

“Marquise was a great person. He was a great leader,” Saban said when he heard the news back in 2007, his first year with the Tide. “Certainly, he was a great player for us. I thought he played his best game ever in the national championship game against Oklahoma in the Sugar Bowl. His family, his mother, his grandmother are great people.

“There’s no question that you sit around a lot and think about why do things like this have to happen,” Saban added. “Such a tragedy happening to young people and their families. He had such a bright future, so it gets cut short. Our sympathy is certainly with his family and loved ones. I know a lot of the players who played with him and were part of a team that was really special in terms of what they were able to accomplish. And guys that had the opportunity to coach him all feel the same way.”

Thirteen years ago today, Marquise Hill left a life and legacy for many to remember. As the time continues to fly by, a casualty in itself, stories like this are a great reminder of how fleeting life really is. That 24-year-old man who died on a tragic day in May would be 38 on August 8. As Coach Saban said, it is truly sad to consider why some make it, and some don’t. 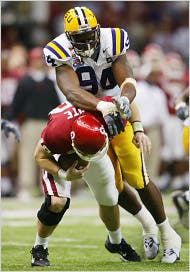 Interested in more news from Louisiana? We've got you covered! See More Louisiana News
Previous Article DROP THE MIC: Illinois Judge Says Everything You Want to Say About This “Insanity”
Next Article SADOW: Louisiana Is Apparently Going To Solve Budget Problems With A Weed Scam