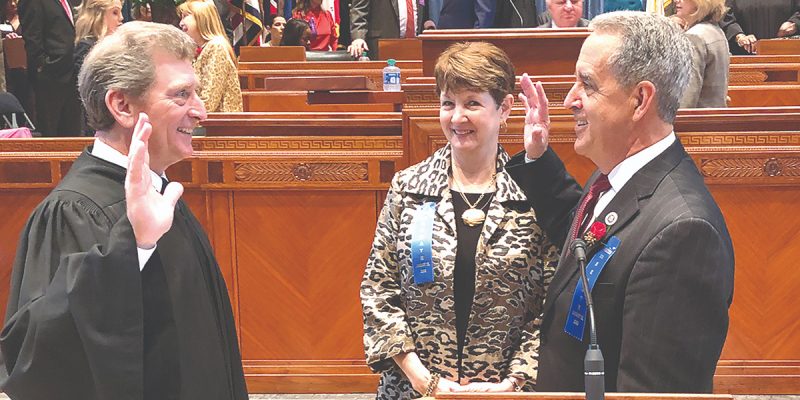 There’s a fox in the henhouse of the Louisiana Republican effort to implement tort reform, and that fox’s name is state Sen. Louie Bernard.

Maybe a missed red flag was that Bernard, who spent most of his working life in government, won election as Natchitoches Parish clerk of court six times, up through 2011 as a Democrat. Or that as clerk of court he rubbed elbows with a lot of personal injury lawyers. Or that trial lawyer and Democrat former state Rep. Taylor Townsend, one of Democrat Gov. John Bel Edwards’ top campaign finance bundlers, gave to the limit to Bernard’s Senate campaign, as did Townsend’s uncle party powerbroker Democrat former state Sen. Don Kelly, and also their law firm as well.

The payoff began last week when Bernard cast in committee the only GOP vote for Edwards-backed insurance regulation, positioned as faux tort reform, that actually would raise the cost of Louisiana’s already ruinously-high vehicle premiums. The next day, he proved his anti-reform vote was no fluke.

SB 471 by Republican state Sen. Robert Mills would address a crisis in the state’s logging transportation business. Essentially, high insurance premiums provoked by Louisiana’s sky-is-the-limit tort laws have driven all but two (legal) carriers out of the business, and the bill takes a two-pronged approach to resolving this: safety regulation and tort reform.

In his testimony in front of the Senate Committee on Agriculture, Forestry, Aquaculture, and Rural Affairs, Mills noted the bill could use some modifications in its current language, and pledged to make these prior to floor consideration. The bill is modeled after other states’ laws and philosophically resembles how Louisiana law deals with medical malpractice.

But a key point leaves little room for negotiation, lest its alteration destroy the bill’s objective in substantially lowering insurance rates for log transporters: a cap on “general damages” (commonly referred to as awards for noneconomic “pain and suffering”). In Louisiana, no general cap exists for this but instead follows a complex set of restrictions, if any, depending on the kind of claim. Mills wants to use the $500,000 limit (without participation in the Patients Compensation Fund) as in malpractice claims for this kind of claim which currently permits unlimited such damages.

However, that limit exactly is what trial lawyers don’t want. This kind of award provides fertile grounds for their huge paydays. Mills said the bill’s intent is to ensure coverage of all economic damages including medical expenses without limit, but would limit noneconomic damages.

In committee, Bernard specifically objected to the cap, and even trotted out a lawyer from his district to testify against the bill by referring to a case unrelated to it. He called it unfair, even though Mills said the bill was designed to make victims whole economically. He ended up as the only vote against sending the bill to the floor.

Fool me once, shame on you; fool me twice, shame on me. It’s clear: in the Senate Republican delegation, Bernard has gone rogue on this issue and shows every sign of wanting to condemn Louisianans to continue to pay much higher vehicle insurance rates than necessary in order to transfer wealth to a cabal of trial lawyers.

These things happen. Legislative leaders know that party members from time to time won’t support the group’s issue preferences. Bernard’s defection leaves the GOP, assuming no others follow, right at the two-thirds majority needed to override the certain veto Edwards, a trial lawyer prior to becoming governor, will cast on bills like this.

Yet giving Bernard privilege for crossing them up doesn’t have to happen. He received a plum assignment for a rookie senator, as the vice chairman of the Senate Insurance Committee (where he supported the Edwards agenda). Republican Senate Pres. Page Cortez should make clear to Bernard that anything less than floor support for tort reform bills, the delegation’s top priority outside of budgeting, means the loss of that post.

Bernard may not care that he can help relieve the suffering of Louisiana ratepayers or serve the needs of his district rather than act as the errand boy oto trial lawyers – at 68, he may want to serve only one term. Perhaps losing influence right from the start of his legislative career may make him reconsider.