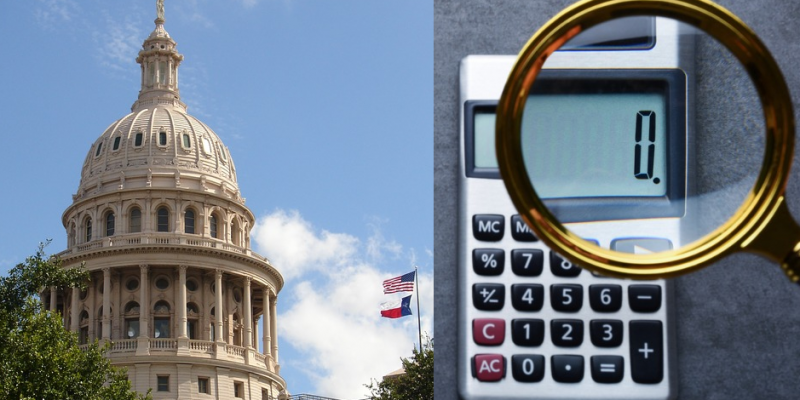 While state leaders debate whether to order agencies to cut their upcoming budget requests anywhere between 5% to 20%, another method to cut back spending is making the rounds.

On Friday, Sen. Jane Nelson, chairman of the Texas Senate Finance Committee, said “As I meet with each agency to review their appropriation requests, I will begin at zero.”

This came on top of the House’s Texas Freedom Caucus call for zero-based budgeting as state agencies enter into drafting budgets to submit to the Texas Legislature in 2021.

Comptroller Glenn Hegar said by July state revenue predictions will be revised in lieu of COVID-19 reaction losses, but that revenue has already taken a hit due to the downturn in the oil and gas industry. Nelson compared the current situation to the Great Depression, according to an article in state political analysis blog Quorum Report. The Freedom Caucus called it “a free fall” and noted nearly 2 million Texans have filed a COVID-19-related unemployment claim with the Texas Workforce Commission. Revenue had already declined 9.3% in April according to Hegar.

Quoting from the Freedom Caucus’s press release on the matter:

“Uncertainty abounds, but three things are clear: 1) the need for strict fiscal responsibility going into next legislative session; 2) the need for—at the very least—double-digit budget cuts; and 3) in order to implement those cuts, the application of the practice of ‘zero-based budgeting’ on agency budgets […]”

“Aside from Federal dollars, sales tax collections comprise of over 25% of the state budget. The next largest revenue streams—motor vehicle sales/rentals and motor fuels taxes—are also sure to take a hit economically. In short, there is a massive revenue crisis on the horizon, and we do not think the state should be taken by surprise. With proper planning, Texans can weather this storm.”

Gov. Greg Abbott has hinted at 20% budget cuts but seems to be vacillating on that position, while outgoing Texas House Speaker Dennis Bonnen is calling for 5% (on top of appointing a very liberal member of the House to the Legislative Budget Board). The Freedom Caucus release is calling for 10% as a minimum in addition to zero-based budgeting, and said some level of budget cuts “inevitable.” Another $250 billion two-year state budget is not sustainable, the release said.

From the hip: What is zero-based budgeting, and does it actually work?

In short, zero-based budgeting is the rejection of the conventional “use it or lose it” method, in which departments or agencies will start with their previous year’s expenses and then add or subtract from that as deemed necessary. As such, “padding” those budget often occurs in hopes of garnering additional funds.

The Freedom Caucus sums up the reasoning for zero-based quite well, as it rejects “the common budgeting mantra of ‘that’s how we did it last year, so that’s how we’ll do it this year,’ [and] instead requir[es] agencies to justify each and every dollar of taxpayer money appropriated.”

The process has been implemented by governments and large corporations alike.

In 2003, the Texas Legislature faced a possible $10 billion shortfall but implemented zero-based budgeting across every state agency, which helped to avoid a tax hike. (Sidenote: this was also the year that House Democrats broke quorum and took a hike of their own to Southern Oklahoma to hide out in an effort to maintain high levels of spending.) In 2021, Texas may find itself in a similar situation, the Freedom Caucus pointed out, as the state may also have to consider eliminating unnecessary agencies such as the Texas Racing Commission or the Texas Film Commission.

Zero-based budgeting surfaced in the 1970s when Texas Instruments gained notoriety for implementing the method, followed by Georgia Gov. Jimmy Carter who applied it to state spending to much fanfare. Carter took it with him to the White House and in 1976 introduced it to federal agencies. Many states have considered the concept since.

The problem at the federal level is that it quickly became federal-ized. Each agency was asked to come up with “decision units” for each line item, contributing to a “decision package” that included the rationale for each expenditure, calculations of efficiency, etc. As federal reporting notoriously goes, this became an arduous process investing many hours of manpower to rank, prioritize, and review each of the many reports this method generated, not to mention the inter-office conflicts that occurred when budgets were being built from scratch (this was the tale this writer was often told by veteran state workers who lived through 2003).

In the end, the Carter-era zero-budgeting resulted in more spending per agency. The method was ditched by President Ronald Reagan.

Zero-based budgeting can be implemented successfully, but it will require a commitment of additional office staff and work-hours to successfully rebuild a budget every biennium. It must be implemented strategically if at all, and perhaps not in the immediate throes of a revenue shortfall. The devil will be in the details.