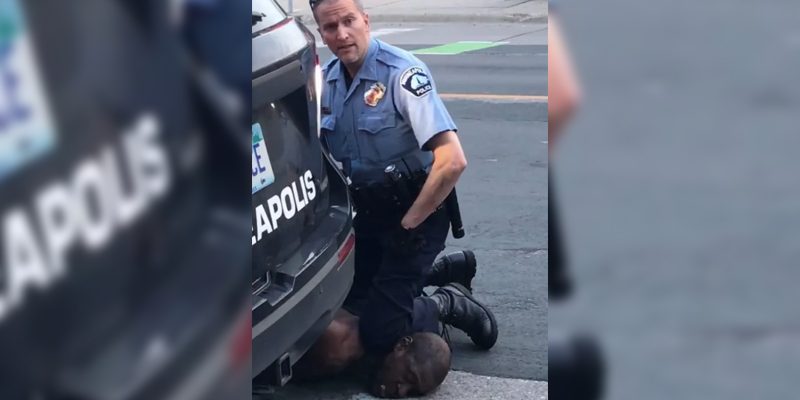 I will spare our readers from the choice of clicking ‘play’ because it is absolutely horrific. A Minneapolis police officer uses his knee to put all his weight on the neck of George Floyd until he goes unconscious, all while he is begging for his life.

It is, without a doubt, the most disgusting example of police brutality I have ever seen captured on film but to simplify it as racism-inspired violence is to miss the bigger point.

Bystanders even pleaded with the officer as they saw the man in distress. Initial reports indicate Floyd died shortly after arriving at the hospital.

It is something you never want to see happen in the United States of America which is founded upon the idea that government is a “necessary evil” instituted only to do the exact opposite of what was done in this instance, secure & protect our God-given rights.

It is a reminder of the death of Eric Garner, a New York man who died in 2014 after being placed in a chokehold until he stopped breathing after being approached for illegally selling individual cigarettes.

These two cases are a shocking reminder of the awesome power that law enforcement officers are entrusted with and why proper training and accountability are so critical.

But we must also be careful, as Americans, not to attribute the worst possible motives to the officer in question and law enforcement at large. I believe that in more cases than not, police brutality has less to do with race and more to do with abuse of power.

In fact, Candace Owens points out that the majority of Americans killed by police officers are white but you wouldn’t know that from watching the mainstream media because it doesn’t advance their apparent goal of dividing America along racial lines in an election year.

While some will say that all cases involving a black victim and white officer are about race, others will defend law enforcement no matter what heinous act is committed. The two biases seem to feed off of one another. Each case must be judged on its own merit.

The only solution is for Americans to unite in the face of this tragedy and make real reforms to protect all Americans from these kinds of human tragedies. We must reacquaint ourselves, as one nation under God, with the wisdom of the bill of rights and of the American ideal of liberty.

The death of George Floyd should be a catalyst for Americans to unite and recommit ourselves to our founding principles which protect the liberty of all Americans.