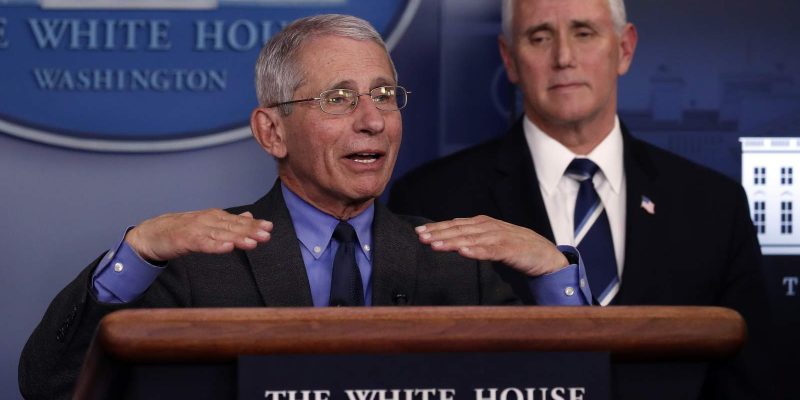 Dr Anthony Fauci, director of the National Institute of Allergy and Infectious Diseases, is a smart man with a history of rubbing elbows with some very important people.

He has had an interesting go of it, to say the least, since he started speaking in front of the camera about COVID-19 months ago. All along you had to wonder how much of what he was spewing did President Trump really agree with.

And to all those points, how much of it still is.

Now he is saying what so many Americans have been shouting from the rooftops for weeks and weeks now.

“I don’t want people to think that any of us feel that staying locked down for a prolonged period of time is the way to go,” Fauci said during an interview with CNBC’s Meg Tirrell on Halftime Report, indicating that it could cause “irreparable damage” to the country’s economy.

He said the U.S. was forced to implement more severe measures because COVID-19 cases were exploding when all of this began months ago. “But now is the time, depending upon where you are and what your situation is, to begin to seriously look at reopening the economy, reopening the country to try to get back to some degree of normal.”

No, Dr Fauci. That time came a long time ago. And nothing was ever exploding.

This debate goes well beyond the economy. It has everything to do with freedom, not the least of which is the freedom to worship. On Friday, President Trump voiced his displeasure with certain businesses being open in some states, while churches are not.

“Some governors have deemed the liquor stores and abortion clinics as essential,” Trump said. “But have left out churches and other houses of worship. It’s not right. So I’m correcting this injustice and calling houses of worship essential.”

Fauci has been criticized in recent days by Republicans, including U.S. lawmakers Rand Paul and Andy Biggs, for making comments appearing to advocate for keeping some businesses closed longer. Just last week, Fauci told members of Congress that the nation could face even more “suffering and death” from the COVID-19 if some states rush to reopen businesses too early.

Fauci did continue that line of thinking in the Halftime Report interview.

“In general, I think most of the country is doing it in a prudent way,” he said. “There are obviously some situations where people might be jumping over that. I just say please proceed with caution if you’re going to do that.”

Also today, Fauci said it was “conceivable” that the U.S. could have a vaccine out by December. But given the history of this so-called pandemic and Fauci’s questionable commentary on it, not to mention the fact that vaccines aren’t even guaranteed to work, we should all be paying close attention to anything he says.