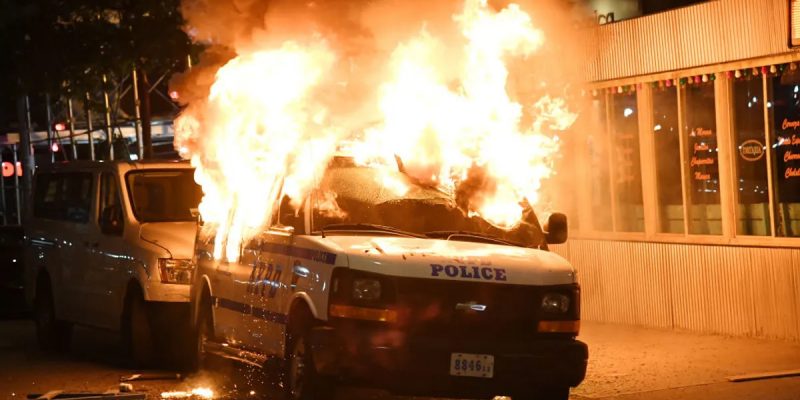 Last week was undoubtedly the worst week for the United States since 9-11.

It started on Memorial Day when George Floyd was apprehended for attempting to buy cigarettes with a counterfeit $20 and was brutally killed at the knee of a Minneapolis policeman.

George Floyd was denied not just of his rights, but more importantly of his humanity, and then robbed of his life.

The country stood united in demanding justice for the late Floyd and applauded the termination, filing of charges, and arrest of Derek Chauvin.

The arrest was applauded across races, party, and ideology, from the White House to the street corner.

Chauvin was going to have what he denied to Floyd, his day in court.

But consensus is the enemy of those radical elements who saw the death of George Floyd as license to irreparably divide the country to advance a radical agenda that is not about black lives but Marxist red.

The exploiters seized their opportunity to wreck a moment to address lingering problems and obstacles that have disproportionately blocked the realization of the American Dream to an integral segment of our national fabric. They were aided and abetted by the media and a Minnesota political establishment that deliberately engaged in the peddling of lies and misinformation regarding the source of the looting and rioting and then ineptly mismanaged the crisis they facilitated.

Though George Floyd’s name has been tweeted millions of times and chanted on the streets across the globe, the martyr has been enveloped in a smoke of unjustifiable riots, disgraceful looting, and wanton destruction that drowns out the badly needed institutional conversation about race and has cost the lives of civil servants across the country.

We have seen historic St John’s Church, the house of worship of presidents, put to the torch.

The National World War II Memorial that honors the men and women who risked (and in over 400,000 heroic instances lost) their lives fighting Japanese imperialism, German National Socialism, and Italian fascism vandalized by the alleged anti-fascists.

Washington DC’s other memorials honoring the Great Emancipator himself Abraham Lincoln and his generals who successfully waged war to save the Union and exorcise the curse of slavery were defaced.

Even monuments to our immigrant Revolutionary War heroes were not spared in Lafayette Square where statues honoring Lafayette and von Steuben were damaged.

Why and for what purpose?

Though we are surrounded by creature comforts unthinkable only decades ago, being suddenly penned up due to the COVID-19 virus has taken a psychological toll on the national psyche. And that’s not factoring the economic stress from this pandemic as millions of Americans won’t be returning to the job they held less than three months ago.

Americans are not in a good place emotionally or spiritually and that may have contributed to the rampaging that visited almost all of America’s large cities with few notable exceptions (COVID-battered and hurricane-threatened New Orleans mercifully being one).

But there’s something out there that predates Red China’s pandemic.

Since 2016 we have seen the rise of a violent irrational force within this country that started off harassing attendees at Republican rallies but exploded exponentially after the election of Donald Trump to the presidency: ANTIFA.

This group of predominantly white young and middle aged people, some being well-educated professionals, have mimicked the attire of the savage ISIS combatants in Syria and Iraq, including their signature black balaclava that conceals their face just as white hoods hid the identities of members of another domestic terrorist group, and they have conducted themselves like Ernst Rohm’s brown-shirted SA gangs that terrorized Weimar Germany.

ANTIFA combines a radical Communist anti-American ideology with a sadistic brutality and an arrogant sense of immunity from consequence and prosecution as they trust their interests will be protected by a sympathetic mainstream media and activist judges who will decide what if any punishment they will receive.

ANTIFA believes in the complete overthrow of capitalism, private property, Biblical religion and churches (hence St Patrick’s in NYC got some of their attention), and the Founding Fathers from their place of deserved reverence and their everlasting legacies the Declaration of Independence, the Constitution, and the Bill of Rights.

Oh, crushing the contemptible bourgeoisie is also on their list of things to do (Soccer mom in the Lexus SUVs with the Bernie window sticker, this means you).

Philosophically and temperamentally they’re not much different than their Bolshevik antecedents in Petrograd from 103 years before aside from more ganja and less vodka.

Those who are sincerely seeking a more just society should understand that these are not allies but exploiters, as they’ve used protest marches as a blind to commit criminal acts.

We saw the depths of their cruelty when two attorneys in Brooklyn, one hailing from an Ivy League school, attempted to hurl a crudely made Molotov Cocktail at an NYPD unit.

Hopefully the pair of terroristic barristers will be held accountable on the federal level as nobody should have confidence on the local scene under Commissar Bill de Blasio.

Starting with the murder of George Floyd and continuing through other murders and inexcusable acts of violence we have seen this country at its worse.

To save our society and heal our country we must individually engage in human decency while curbing our baser instincts while resolving to combat acts of violence on all levels, institutionally and at the storefront.

A week ago George Floyd was denied his humanity; it’s past time we recognize each other’s.