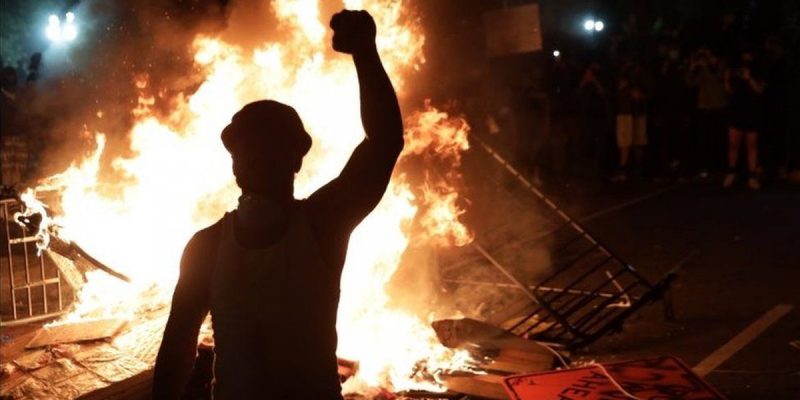 The political Left continues to showcase their double standards while trying to destroy the United States of America. Very obviously, Joe Biden is a terrible presidential candidate. He will not excite or energize the liberal base. And with every speaking engagement, Biden makes another gaffe, things that, had they been said by Donald Trump or any conservative, would result in a media-led lynching. So in their quest to install Biden in the White House, clearly as a figurehead but not-so-clearly for whom, the Left has chosen to take what appears to be an unjust policeman’s killing of a black man and weaponize it.

The Left has condemned all police because of this one man Derek Chauvin, who has already been fired and charged with murder in the George Floyd case, and they are appalled that this keeps happening, although it was extremely rare, hence the outrage surrounding it.

The Left is so racist and bigoted, they took one white man’s evil actions and condemned an entire race. Meanwhile the riots are destroying businesses, properties, and lives. With a significant portion of the rioters being black people, the left would skyscream if people applied the left’s all-encompassing condemnation technique against black people. This is their double standard: racism is acceptable in only one direction: against whites. Added points for using the racism claim against conservatives and southerners.

Social media burst with virtue signaling and white guilt during Blackout Tuesday. White people around the country are dislocating their shoulders from patting themselves on the back so vigorously for posting blackout pictures. One can argue that the blackout posts are about eliminating the racial divide, while the argument can be made that they’re actually emphasizing it more. But “Karen Whitesplaining” knows best when it comes to making herself feel vindicated. The movement is based on making people sheep. Generally, people want to do good things and be part of positive groupthink. This is where the left manipulates the public.

Black lives matter, indeed, but unfortunately black lives lost seem to matter the most to black people and leftists only when they are taken by a white person. The gang and youth violence surrounding drugs is ignored on a daily basis. Take ‘Em Down NOLA marched for George Floyd, yet they never march for the lives taken locally by gun violence when it’s black on black. This George Floyd riot situation is entirely politically motivated.

No one is ardently defending the officer’s actions—not police, not conservatives. President Donald Trump has condemned the killing and vowed justice. The investigation was accelerated. Yet leftists are damaging public and private property, causing chaos, and starting riots. The leftists’ destruction would lead one to believe they are fighting a regime defending the officer—false. They quote Martin Luther King Jr. saying “A riot is the language of the unheard” yet they have been heard and still choose to riot.

Law enforcement are on the battle lines squared off with domestic terrorists. A civil war by definition is when one group fights to overthrow the controlling power of a nation. The media, Fake News & Fox News, is flat-out ignoring that an actual battle occurred outside the White House for two nights with aggressive actions by Antifa anarchists trying to infiltrate the home of the President of the United States. The 2020 battle for the White House has turned into a civil war.

This whole victimization scenario used to ignite emotions—not thought—has been fabricated. The same as the Russians “hacked the election” hoax, the impeachment over false claims of Ukraine quid pro quo, and the absurd overreaction of the COVID-19/coronavirus shutdown. All of those were used to try to hurt Donald Trump—they failed. Now that the economy has begun to resurge from the Flu’s little sister, the left is on to their next and current movement: I Can’t Breathe. When the anarchists are squashed, their leaders imprisoned, and damaged businesses start to rebuild, the Fake News media and the leftists will be on to the next hoax, and—sarcasm on—This Will Be The One!

A major takeaway that the Fake News covers up so well is that the left has to actually fake their claims on the right in order to make conservatives appear as bad they claim the right is. The left has demonized the right so much for so long, and they’re so far out of reality and now they have to fake how they think the right acts because conservatives are nowhere near as bad as the left makes them out to be. The list of liars is not limited to these but includes: Jussie Smollet, Seth Dunlap formerly of WWL radio, Adam Schiff, Brett Kavanaugh’s accuser, and the cabal of Obama officials who sought to destroy General Flynn.

A sad aspect is the actions of Antifa further victimize black people and prolong disparaging stereotypes. Videos reveal white Antifa misfits providing bricks to black people and pallets of bricks oddly placed on location at multiple protest sites. Even when Antifa breaks windows, they are setting up African Americans to then commit crime by looting. And the reality ignored by Fake News is that leftists have set up black people to perpetuate a negative stereotype.

The world is not perfect. Crazy things happen. Lives are taken when they shouldn’t be. Life is about how you react to difficult times and great times. The people behind the protests want America torn to the ground for a reboot. They don’t have confidence in Handsy Joe. So the organizers are manipulating Americans by selling the fantasy of a liberal utopia that’s neither based in reality nor realistically possible. Demanding an end to racial injustices is unattainable in this imperfect world. It’s a cause the left latches on to, and since it’s not solvable, they can use it as a political weapon. And all the Blackout Tuesday participants can say they tried and they wanted it.

The left’s double standard is the fuel that keeps their flimsy cause alive. If they hate America so much, they need to leave. Simple as that. Use their organizing technology to group-move to another country and take over the same way they dream to do so here.

Interested in more national news? We've got you covered! See More National News
Previous Article NOT A SURPRISE: It Turns Out There Are Deeper Layers of Truth Behind the Tear Gas Story Outside the White House
Next Article Louisiana SERS has enough assets to pay out 9.4 years of pension benefits, study finds