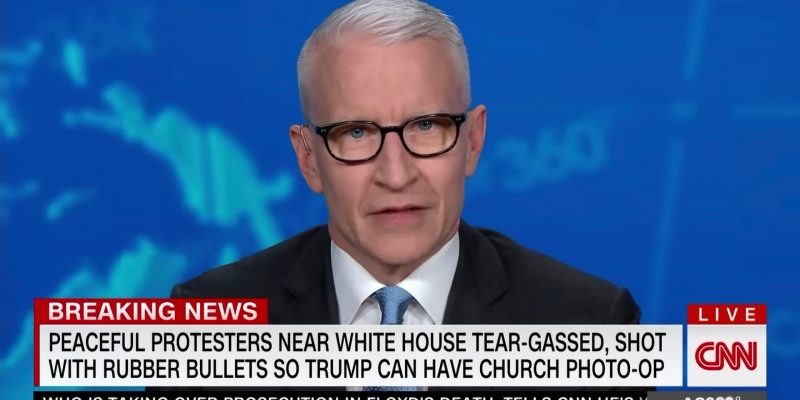 The first question every American should have asked themselves about the media narrative that President Trump had his minions tear-gas a crowd of peaceful protesters for a photo op at St. John’s Church is, if this were indeed true, how and why on Earth could cops without gas masks launch it into an area that the President of the United States and others (also unmasked) would casually traipse through just minutes later?

Ask yourself that now, if you haven’t.

In the meantime, let’s preface this story by showing in great detail one example of the unabridged vitriol so many on the Left—politicians, celebrities, and “common” folk alike—feel toward this man.

Quoting unnamed sources within the administration, [CNN correspondent Kaitlan] Collins said: “It was driven in part by the fact that he was upset over coverage that he had been rushed to the underground bunker” while protestors gathered outside the White House. “Oh, my God,” Anderson interjected, as Collins continued her report. “Wow.”

“We are in trouble,” Cooper told her, looking incredulous. “He was hiding in a bunker and embarrassed that people know that. So what does he have to do? He has to stick police on peaceful protesters so he can make a big show of being the little big man walking to a closed down church.”

He went on to say that Trump “seems to think that dominating black people, dominating peaceful protesters is law and order. It’s not. He calls them thugs. Who is the thug here? Hiding in a bunker. Hiding behind a suit. Who is the thug? People have waited for days for this wannabe wartime president to say something. And this is what he says. And that is what he does.”

Later, Cooper mocked Trump for that photo op at St. John’s Church, where the president briefly (and awkwardly) held up a Bible.

“He has to sic police on peaceful protesters so he can make a big show of being the little big man walking to a closed down church,” said Cooper. “This event, as I said, if it wasn’t so dangerous and disgusting, it would be funny, because it is so low rent and just sad.”

It turns out this is not how the event materialized. At all. It turns out that in the MSM’s “report it first” craze, all the facts were not substantiated. Every major mainstream  media platform, including Fox News, reported the lie that Park Police used “tear gas” to clear an area of protesters who were just standing there like angels not provoking anything.

The truth is something vastly different and is being revealed now, but not before thousands of false posts on social media, print stories, and television stories have once again painted a damning picture of Trump and his administration.

This is why truth and reality are nothing but man-created constructs. It is what Denzel Washington meant when he scolded the mainstream media for not handling the responsibilities that come with the territory. It is a must-see:

Denzel’s time-transcendent wisdom is lost on the media today. It’s also lost on far too many well-meaning Americans. And the tear gas/Trump walk to St John’s Episcopal Church story is just one of the latest examples.

Following days of violent riots and looting in cities all over the country, Washington, DC announced a 7 pm curfew on Monday night. Well before that time arrived, President Trump was addressing the nation from the Rose Garden. Immediately afterward, he walked through Lafayette Park to the church at which every President has worshipped since James Madison, a church that rioters had set on fire the night before. Once there, in a show and symbol of strength and unity for Americans and the human race in general, he stood before a church sign reading “All are welcome,” with a Bible held up in his hand.

All of this was, yes, a photo-op, as the enemy loves to call it. Absolutely, it was symbolic. It was an anchoring assurance for many Americans that we will be okay, if we keep our faith in God.

What on Earth is so terribly wrong with that?

Yet because of the hate for this man (not to mention for God), this President fighting so hard for the liberty of all Americans, the media has vilified him for it. And worse, has continued to control the minds of too many Americans content to blindly believe anything they see or hear.

Here is a list of newly reported findings that clearly transform this story into something entirely different, as if anyone should have guessed it would be otherwise at this point in the culture war:

Here is the full statement from USPP Chief Monhan.

None of this should be a surprise by now, yet it still continues to amaze, if for no other reason but the mere fact that so many Americans continue to fall for it. I’m not talking about the enemies in media who know what lies they are spreading; I’m talking about everyday Americans who behave more like zombies than clear-thinking, astute human beings.

The entire picture was that Trump was an Incredible Hulk-looking monster trudging through the cherubs of God’s peaceful green Earth to go have someone take a Polaroid of him for the family photo album.

And people everywhere just blindly went with it.

In my articles, I am dancing on the line between a spirit of optimism and a spirit of warning. I do that because I believe we need both. Yes, there are mounting victories in this culture war, but we must stay vigilant. We cannot grow weary of the battle. We must continue to spread the truth.

For certainly, the enemy will never tire of spreading the opposite.

Writer Jeff LeJeune has an M.A. in English, is a high school and college instructor, and is a former college athlete. In addition to his writing work for The Hayride, he is a ghostwriter, editor, and novelist.