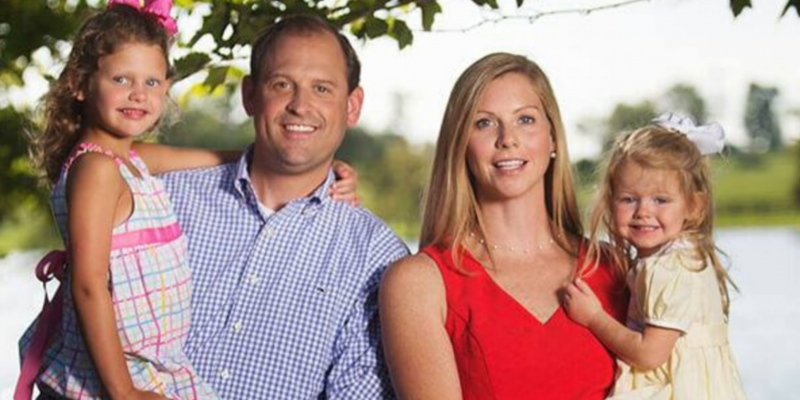 U.S. Rep. Andy Barr’s wife, Eleanor Carol Leavell Barr, who went by Carol, died unexpectedly in the family’s home Tuesday, according to Barr’s office. She was 39.

“During this tragic time, we respectfully ask for privacy for Congressman Barr and his family to grieve Mrs. Barr being called home to heaven,” Barr’s Chief of Staff Mary Rosado said. “Congressman Barr may release a more detailed statement at a later date, but right now is solely focused on being a father to his two beautiful daughters.”

Carol grew up in Georgetown, Kentucky, and graduated from the University of Kentucky where she majored in communications and information. She married Andy in 2008 and they have two young daughters, Eleanor and Mary.

Barr worked for Pfizer and previously served as the executive director for the Henry Clay Center for Statesmanship in Lexington.

Kentucky politicians expressed their condolences online and to the family.

U.S. Senate Majority Leader Mitch McConnell of Kentucky said in his statement that he and his wife, U.S. Secretary of Transportation Elaine Chao, were “stunned” and “heartbroken” by the news.

“Her warmth filled whatever room she entered and her contributions made Kentucky a better place for all of us,” McConnell said.

“Carol was an accomplished woman and business professional,” Osborne said. “A devoted friend, and a kind and giving person, she was an unlimited partner in Congressman Barr’s service to this Commonwealth. However, above all else, Carol was a loving wife and mother.”

Britainy and I are heartbroken for U.S. Rep. Andy Barr and his family tonight at the sad news of the unexpected passing of the congressman's wife, Carol. We are praying for the Barr family. ^ AB

Heartbroken to learn of Carol Barr’s passing. Carol was a wonderful mother and wife, and she was beloved by all who knew her. She will be deeply missed. My heartfelt prayers are with Andy, their children, and their entire family as they mourn this unspeakable loss.

Heartbroken to learn of Carol Barr’s passing. Carol was a wonderful mother and wife, and she was beloved by all who knew her. She will be deeply missed. My heartfelt prayers are with Andy, their children, and their entire family as they mourn this unspeakable loss.

Mac Brown, the chairman of the Republican Party of Kentucky, said “our hearts go out to the Barr family at this tragedy. While there are no words that can heal the pain of losing a loved one, we pray together that God will comfort Congressman Andy Barr, their daughters, and the entire family through this very difficult time,” Brown said.

Sen. Rand Paul said his heart was heavy and asked everyone to join his family in praying for the Barrs “during this incredibly difficult time.”

Rep. James Comer, R-Tompkinsville, said he and his wife were “devastated.” Treasurer Allison Ball said she was “heartbroken.”

TJ and I are devastated to learn of the passing of my friend and colleague @RepAndyBarr’s wife Carol. Our prayers go out to Andy and his beautiful daughters during this unimaginable time.

We are heartbroken by the passing of our friend Carol Barr, wife of Congressman Andy Barr. They attended our wedding. The memories I have of her are of kindness, warmth, understanding, & encouragement. She is deeply missed. Praying for Andy and their two precious, young daughters