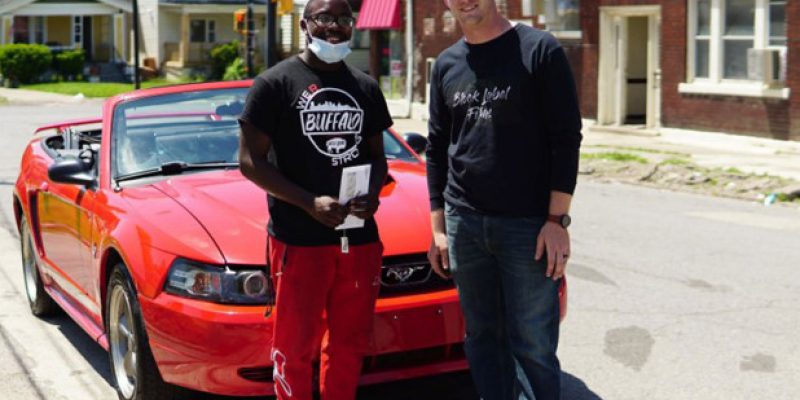 Antonio Gwynn had watched, on Facebook Live, the protests and riots mingle together in a great destructive wave over his city of Buffalo.

He decided he would do something to help.

The 18-year-old left his house in the dark of night and spent the next ten hours cleaning up his community.

When Matt Block, a total stranger, heard of Gwynn’s quiet helping hand, he gave him the gift of his very own beloved 2004 Mustang convertible.

“I couldn’t come to grips with selling it, and this was a good way for me to get rid of it and know someone that gets it is going to appreciate it, I think,” Block said.

Briceland Insurance Agency joined the story of hope by covering Gwynn’s insurance for the next year.

“I literally stopped, pulled over, and started crying,” Gwynn said, whose mother died in 2018. “So did my great aunt. My little cousin did also.”

Gwynn’s original plan was to attend trade school first and save up for college. Now, he’ll skip past the original plan and go directly into working on a business degree, while studying mechanics on the side.

There was a great coincidence in the car gift, a coincidence that melded the car and college surprises.

“I always wanted to be someone that can help everyone with their car problems,” he said. “This is a great opportunity I have right in front of me.”

Now let’s hope Medaille College is one that doesn’t indoctrinate its students in the very principles Gwynn’s seems to reject.

The famous Fred Rogers of Mr Rogers’ Neighborhood once said, “When I was a boy and I would see scary things in the news, my mother would say to me, ‘Look for the helpers. You will always find people who are helping.’”

Thanks, Antonio, for helping. Thank you very much.