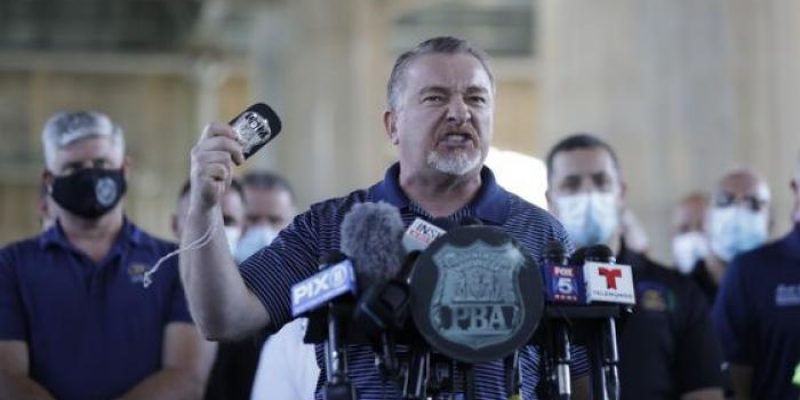 “What world are we living in?”

These are the words of Mike O’Meara, president of the NY State Police Benevolent Association.

It is a question many Americans have been asking themselves a lot lately, with the reality of unions and politics likely far from their minds.

During a press conference in New York City, dozens of union chiefs challenged the narrative of the media and lawmakers “vilifying” policemen.

“Stop treating us like animals and thugs, and start treating us with some respect!” he continued. “That’s what we’re here today to say. We’ve been left out of the conversation. We’ve been vilified.

In the aftermath of the videoing of George Floyd’s death, groups such as Black Lives Matter, along with many voices on the Left, have called for not only the defunding, but the complete destruction, of law enforcement as we know it.

Some even on the Right may say a purification of sorts may be a good thing. But it is a delicate situation when you’re dealing with people like Minneapolis City Council member Lisa Bender.

Per FoxNews, Bender believes the calling of 911 to report an intruder is an example of “privilege”:

“Do you understand that the word dismantle, or police-free, also makes some people nervous, for instance, what if, in the middle of the night, my home is broken into,” Camerota asked. “Who do I call?”

“Yes, I mean I hear that loud and clear from a lot of my neighbors, and myself, too, and I know that that comes from a place of privilege,” Bender responded. “For those of us for whom the system is working, I think we need to step back and imagine what it would feel like to already live in that reality where calling the police may mean more harm is done.”

CAMEROTA: "What if in the middle of the night my home is broken into. Who do I call?"

BENDER: "Yes, I hear that loud and clear from a lot of my neighbors. And I know — and myself, too, and I know that that comes from a place of privilege." pic.twitter.com/WhubQ9yJIf

Of course, this defies all logical sense, unless you’re wanting a Communist state, to suggest that calling 911 to protect your home is coming from a place of privilege, that we must be intruded upon and perhaps murdered in order to fairly understand the alleged plight of those who are so underprivileged.

What kind of world are we living in, is right.

“Nobody talks about the number of police that were killed last week in America, and there were a number of them,” O’Meara said. “We don’t condone Minneapolis. We roundly reject what [Chauvin] did as disgusting. It’s disgusting! It’s not what we do. It’s not what police officers do.”

“Our legislators abandoned us. The press is vilifying us. Well, you know what guys, I’m proud to be a cop and I’m going to continue to be proud to be a cop until the day I retire. And that’s all I have to say.”

There are good cops and bad cops. And the politics of unions are certainly not explored here. But at a basic level, law and order is necessary in any society, as long as it has the people as its cause. O’Meara may likely be one of the great number of good ones who are in the fight of their lives right now. It is a delicate situation, given the number of bad cops we saw abusing their position during the virus lockdown. But it is also safe to say that the majority of police officers are more than good, given the perils they put themselves in every day, and the destruction of that part of society, union politics aside, would mean doom for us all.

We must stay vigilant and continue to fight with the weapons our republic affords us.