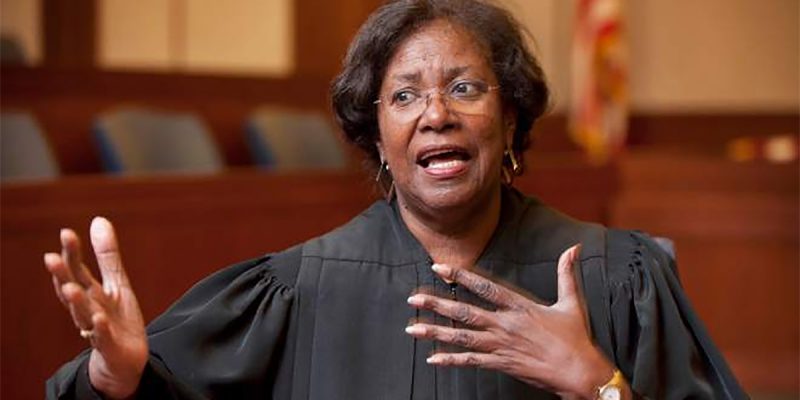 We’ve been through this before with 19th Judicial District Court judge Janice Clark, particularly during the long-running fiasco surrounding the criminal antics of her daughter Tasha Clark Amar, who heads the felonious RICO mill known as the East Baton Rouge Council on Aging, but in case anyone was hazy on the question of the Clark’s self-appointed privilege the evidence became clear yesterday.

Janice Clark, the 19th Judicial District Court’s senior judge, has filed a lawsuit challenging Louisiana’s mandatory retirement age for members of the judiciary. She says that preventing the election of people over age 70 to the bench is “completely unfair.”

She sued the state Monday, claiming the mandatory judicial retirement age amounts to unconstitutional age discrimination. She said she will file paperwork next month to seek another term.

“I expect to run and win,” she said Tuesday during an interview in her 19th JDC office.

She is joined in the suit by a nonprofit association called Louisiana Voters for an Experienced Judiciary, or LVEJ.

The lawsuit, filed in the 19th JDC and assigned to state District Judge Don Johnson, seeks to halt enforcement of the mandatory retirement age while the suit plays out.

“It’s just a denial of equal protection,” she said. “It might be law, but it’s not justice. It’s completely unfair. Justice for all. That’s all we want.”

This issue isn’t quite settled law in Louisiana, though Clark shouldn’t get her hopes up. A judge in New Orleans, Frank Marullo, fought the state’s age limit in court for years but resigned before the question of whether the age limit was constitutional was actually decided by the state supreme court. Marullo ended up on the bench for 41 years, which is way, way too much time for anybody to spend in public office.

Clark has been in her current judicial seat since 1992. Her ethically deficient conduct over the 28 years she’s been around is known, and for some reason excused, by just about everybody.

There is another case like this pending in Louisiana. Harry Cantrell is a judge in New Orleans and he’s 72, and Cantrell is also suing to stick around beyond the current election. If the last name sounds familiar it’s because Cantrell is the father-in-law of that city’s mayor.

The one thing about that judicial age limit is it tends to do a nice job of breaking up these little dynasties that tend to form around certain families. And the question of whether judicial age limits are constitutional in federal law has already been decided in a clear U.S. Supreme Court decision in the case of Gregory v. Ashcroft, surrounding an identical age limit of 70 years old in the state of Missouri…

Missouri’s mandatory retirement requirement for its state court judges did not violate either the ADEA or the Fourteenth Amendment’s Equal Protection Clause. In addition to emphasizing Missouri’s, or any other state’s, Tenth Amendment right to define the qualifications of its highest state officials, the Court held that the regulations of the ADEA did not apply to “policy-making” appointees such as state court judges. With respect to the petitioners’ Equal Protection challenge, the Court employed a rational basis test to examine whether a rational relationship existed between Missouri’s goal of promoting competent state court judges and its retirement requirement. Noting the connection between increasing age and declining mental and physical capacities, the Court held that Missouri’s retirement requirement for judges who reach the age of seventy was not unreasonable.

The age limit isn’t age discrimination, it’s just a way to impose term limits on elected officials so that somebody else gets a chance. There’s a state interest in doing so; while Louisiana’s legislative term limits present something of a downside in that as many as a third of the state’s legislators are first-termers still feeling their way around the legislative process at any given time, most people agree it’s a good thing to have weeded out so many of the crooked old lifers who used to stand in the way of reform. Term limits relieved us of Francis Heitmeier and John Alario, and a different form of them is intended to also relieve us of Janice Clark.

It’s unlikely that this lawsuit will go anywhere. There isn’t much in the way of law standing up for Clark. Her “equal protection” argument is tremendously unpersuasive for a judge to be making; when you’ve already served on the judicial bench for 28 years you can’t exactly claim you’ve been discriminated against.

So who is “LVEJ?” A Google search for Louisiana Voters for an Experienced Judiciary turns up exactly nothing other than the Advocate article about Clark’s lawsuit. Nor could we find anything at the state Ethics Board website about them. Nor at the Secretary of State’s website. We also asked around among a few lawyers of our acquaintance; nobody has ever heard of them. One would imagine you’d want to have a real entity registered with some responsible government agency before going into court with it as a party to a lawsuit, but hey – that’s not how Janice Clark’s people roll.

The two lawyers filing the suit on Clark’s behalf, Ernest L. Johnson and Arthur R. Thomas, are veterans of the North Baton Rouge legal goon squad. Johnson, who’s an NAACP dignitary, was actually involved in the lawsuit 30 years ago which created the judicial seat Clark now occupies. He’s also fresh off a six-month suspension of his law license for some sort of unspecified misconduct.

Whether that misconduct involved cooking up a fake entity with which to file a frivolous lawsuit, we can’t say. But it wouldn’t be a surprise.