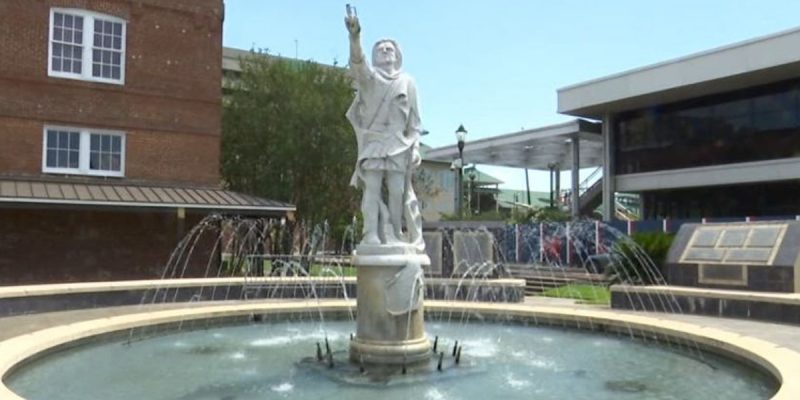 So reports WBRZ. Columbus is too politically incorrect for the current crop of softheaded activists roaming our streets, you know…

The Christopher Columbus statue on the corner where Government Street meets the river was donated by the Greater Baton Rouge American Italian Association in 1992 to then-Mayor Tom Ed McHugh.

It’s stood there for nearly three decades, but it could soon come down.

The fate of the statue will be a topic of discussion for the mayor-president’s commission on race equity and inclusion, set to meet this month.

The commission will look into renaming or removing potentially offensive or oppressive government entities like street and building names or statues.

“He introduced sickness to the land, genocide to the land, slavery, and he even raped and mutilated a lot of the people that were already here. And this statue here makes it seem as if we are complacent with slavery and racist antics that happened in the south, and we are not complacent with it at all,” Breyonna Grant said.

In the meantime, Breyonna Grant and Camren Linson started a petition addressed to the city council and governor calling for the removal of the statue as soon as possible. It now has more than 1,200 signatures.

Though the city-parish doesn’t own the statue, the fountain it sits in is city property. So the statue could at least be moved elsewhere with a vote.

Grant and Linson say they are not interested in destroying the statue and would be happy if the city removed it from public view.

“It is imperative that as the state of Louisiana we set an example and remove all monuments that represent racial inequality, injustice in America and also white supremacy,” Linson said.

So who are Breyonna Grant and Camren Linson?

If there’s any significance to blue lipstick we don’t know what it is.

Both of these ladies apparently graduated from Texas Southern. Grant lives in Atlanta now, while Linson lives in Baton Rouge.

The petition barely has more than 1,000 signatures so far, so it’s a long way from being particularly relevant. But with the local TV stations now giving it play it’s a matter of time before that number grows.

And with Baton Rouge’s mayor Sharon Weston Broome having set up that commission on “equality” and “justice,” it should be little surprise if someone takes this ball and runs with it.

We have a suggestion, which is that the folks in St. George ought to get with the Baton Rouge American Italian Association and pick a site at which to feature the Columbus statue. It needs to be on private land and a historical preservation foundation set up and funded for the upkeep of the monument – so that if the protest mobsters want to attack the statue they’ll be trespassing on private property and therefore subject to arrest.

Christopher Columbus isn’t recognized because he “enslaved” or “raped” or “mutilated” people he came in contact with in the New World. He’s recognized because he did what previous explorers could not – cross the Atlantic and spread Western civilization beyond Europe. Because of Columbus’ exploits the world became a far richer place.

The people denying this man’s achievements are doing so for a very simple reason – they hate America. They hate everything about our history, because they’ve been poisoned into believing that this is a country founded on racism and violence.

And their arguments are so horrifically bad that anyone who disagrees with them is, in their view, then in turn branded as racist or violent.

All of human history is replete with racism and violence. Racism and violence are endemic to every society which has ever existed on Earth. No other country could measure up to the standards these people want to impose on America.

But since Baton Rouge is quickly devolving into a dead city the Grants and Linsons will have all to themselves if they want it, maybe they’re right. Maybe Christopher Columbus ought to be moved out of downtown. Let’s find him a neighborhood in the suburbs where people proud of their national heritage will appreciate him more.