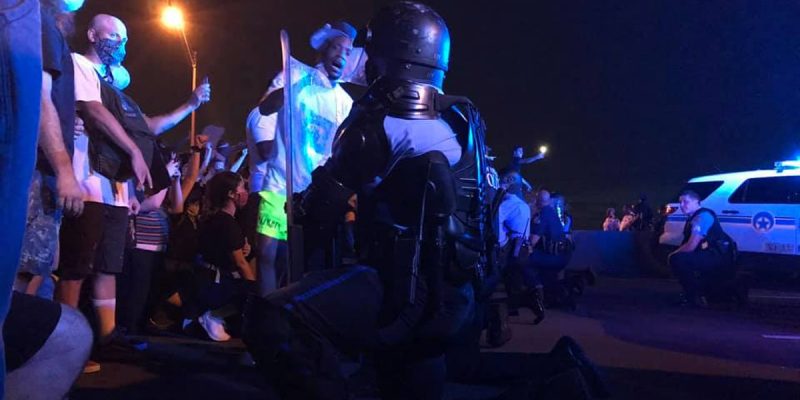 Compared to some parts of the country, Louisiana hasn’t seen any violence (besides the fruits of what New Orleans Police Chief Shaun Ferguson terms “outside instigators”) over protests in the state against the death of alleged passer of counterfeit currency George Floyd in the custody of Minneapolis police, which has brought the arrest of two white and two Asiatic policemen. The state’s political culture and national politics explains why.

Strong Second Amendment rights. Noticeable from the start, a pattern has emerged where states with restrictive guns laws, and particularly cities with these, are more likely to have protests turn to violence. The simple logic here (which too often even is beyond the brainpower of gun control advocates) is that the greater the ability to arm oneself to protect self, family, and property, the less chance someone will threaten those objects with violence. Louisiana has some of the best Second Amendment protections in the country and ones that local governments can’t override. Protesters know this and thereby don’t know that nobody’s health, home, or business they threaten with violence will be met with a defense of people and property by force of arms.

Policy-maker sympathy with radical policy goals of protesters/rioters. While some have spoken in ways that egg on mischief makers, with the exception of Democrat New Orleans Mayor LaToya Cantrell (and perhaps not coincidentally New Orleans has seen the only instances of violence), politicians in Louisiana have restrained from publicly signing on to police defunding, belief in institutionalized police racist activity, and removing law enforcement from areas where rioting could occur, among others. Those places have seen violence, sometimes extensive, break out.

In Louisiana, Cantrell has acted the most sympathetically in greenlighting empowerment of special interests over the general public by letting protesters block major traffic arteries, and for her trouble reaped violence when they decided that wasn’t enough. Nationwide, any hint from politicians that by their actions, either realized or implied through inaction, they support the radical leftist “justice” agendas magnetically draws out elements that see this as a time to practice “justified violence,” and fortunately state politicians haven’t much given that impression.

State political culture of deference. Louisiana’s eccentric political culture creates a population more willing to participate in politics (such as voting at a higher rate than its relative wealth and education would indicate) yet outside of the selection process acts more deferential, as a consequence of historically placing relatively greater emphasis on personalistic factors and lesser on ideology in the selection. It produces a society more likely to act in choosing leaders, but less likely to question that authority once the selection has occurred.

Thus, Louisiana’s people on the whole are less likely to challenge authority directly by engaging in violent behavior. Significantly, the least insular of the state’s central cities, New Orleans, has seen the only meaningful violence in the recent protesting.

Not a swing or blue state. Make no mistake, the political left has seized on this incident to feed its false narrative of “institutional racism” driving disproportionate police brutality against blacks as a weapon against the reelection of Republican Pres. Donald Trump. It hopes to tell the lie often enough and then somehow to assign the blame to Trump to peel off voters for him this fall. The longer and more intensely it can keep unrest going, and especially eye-catching violence (never mind that this has occurred almost exclusively in cities run by Democrats for decades), it believes the more it can damage Trump’s reelection chances.

But the attempted reassignment of votes will work to defeat Trump only where such votes matter. A comparison of the number and intensity of demonstrations in states and the closeness of the 2016 presidential contest shows more and intense protesting (including more violence) in states where the election was decided by five or fewer percentage points and in states with a large leftist voting majority than in those where Trump won by more than that amount. National leftist organizations and their fellow travelers will back financially and with warm bodies protests in places where this can make an electoral difference, using an Astroturf strategy to increase the intensity in swing states to match that (if not exceed it) of organically grown protests in blue states, while red states will have just the relatively smaller, fewer, and less intense organically grown protesting.

Louisiana is a red state where Trump enjoyed a large majority. So, its protesters won’t receive any extra assistance from leftist elements outside of it, hence comparatively quieter protesting without the incentive of these turning violent.

For these reasons, Louisiana catches a break. Its people and property will have greater safety as the political violence hijacking the unfortunate incident rears its ugly head elsewhere.