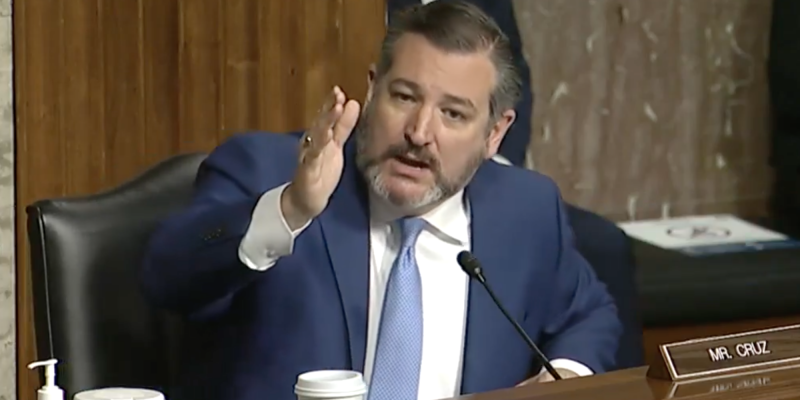 “Spygate” or “Obamagate” are the labels given to the unprecedented spying operation that unlawfully targeted the presidential campaign of Donald Trump and his incoming National Security Adviser Gen. Michael Flynn.

For the first time today we are hearing from former officials at the Department of Justice starting with the top-cop in this case, former Deputy Attorney General Rod Rosenstein.

The junior Senator from Texas who was a collegiate debate champion effectively condenses the facts of the case and brutally lays much of the blame at Rosenstein’s feet. He was right in doing so because Rosenstein became the “acting” Attorney General when Jeff Sessions notoriously recused himself from the case.

Cruz starts by pointing out that the FBI was planning to drop the case against Gen. Flynn on January 4 yet the very next day is when the Oval Office meeting about pursuing Flynn took place which included President Obama, Joe Biden, James Comey, and Susan Rice.

Rosenstein says that, in hindsight and knowing what he knows now, he would not have signed off on FISA warrant renewals targeting the Trump campaign.

As the Senator lays out, among what he now knows is that the “Steele dossier” was bought and paid for by the Democratic National Committee (DNC) before being used as the basis to open investigations into Donald Trump and his associates.

Additionally, significant exculpatory evidence was excluded from consideration and the FBI’s FISA applications were found to be filled with at least seventeen false statements.

Cruz points out that the basis used to prosecute Flynn is unprecedented as “no one in the history of the DOJ” has ever been prosecuted under the Logan Act which he says is unconstitutional anyway.

He says the details of the case can lead to “only two possible conclusions,” that he was “complicit in the wrongdoing” or that his “performance of your duties was grossly negligent.”

“By any measure, what the Obama-Biden administration did in 2016 and 2017 makes everything Richard Nixon even contemplated pale in comparison. The Obama administration targeted its political opponents by weaponizing and politicizing the DOJ, FBI, and the intelligence community.”

See the epic takedown for yourself:

Interested in more national news? We've got you covered! See More National News
Previous Article Riots Versus Churches: Mass Gatherings For Me, Not For Thee
Next Article HEARTBREAKING: “You’re so mad at the police, you guys killed my sister!”