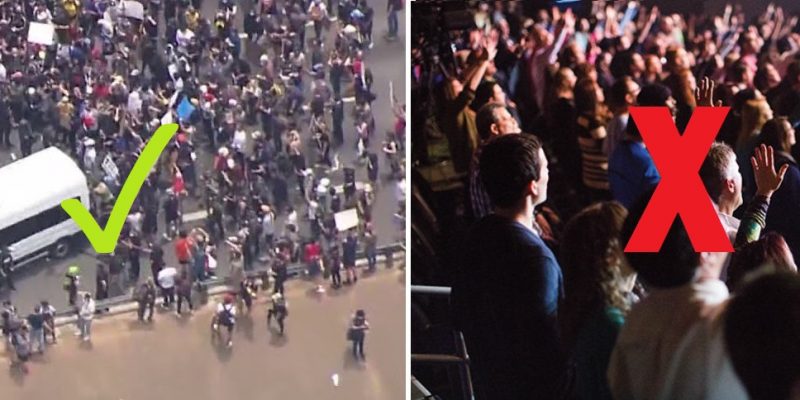 A state Senate candidate pointed out a Texas-sized contradiction on Monday when it comes to how riots and churches are treated:

Posted by Texans for Zimmerman on Monday, June 1, 2020

Don Zimmerman, a Republican candidate in the Texas Senate District 14 special election set for July 14, was not alone in noticing this about-face. After months of around-the-clock coverage of citizens breaking CDC guidelines and locally imposed dictates, those critiques came to a sudden halt as protesters and rioters took to the streets over the weekend to demonstrate against the death of George Floyd in Minneapolis.

Aerial views of tightly packed crowds blocking Interstate Highway 35 a thousand miles south of Minnesota and photos of rioters knocking over a historic fountain on the Texas Capitol grounds went immediately unchallenged in the mainstream press’s coverage of the Austin rioting and demonstrating.

But churches and other religious gatherings, according to an update of orders given by Austin Mayor Steve Adler, defer to the Governor’s order but still recommend video services, limiting gatherings to no more than 10 people, and maintaining a distance of six feet per congregant.

Also across Austin, children’s swings are bolted together and basketball remain nets tied. Many bars and clubs in the Live Music Capital of the World are plywood facades as occupancy restrictions make doing business unprofitable. Numerous restaurants (some legendary) have closed or left town, all in the name of preventing crowds from spreading the coronavirus that causes COVID-19 symptoms. No statements or orders were made to dissuade protesters.

It was not until Tuesday that the U.S. Surgeon General Dr. Jerome Adams warned that the protests could transmit coronavirus.

“Four hundred years of American racism, I’m sorry, that is not the same question as the understandably aggrieved store owner or the devout religious person who wants to go back to services,” de Blasio told a reporter for Hamodia, via
The Washington Free Beacon.

According to the Free Beacon, De Blasio’s comments come weeks after the mayor’s criticism of a prominent rabbi’s funeral — taking his frustrations out on Twitter complaining about mourners not observing social distancing guidelines. De Blasio ordered police to immediately ticket or arrest those gathering in unauthorized large groups.

But like Austin’s Adler, De Blasio took no such action and made no such comment after the Floyd riots erupted.

At least the left-of-center magazine The Atlantic is consistent, with an op-ed headline from Monday stating “The protests will spread the coronavirus; the country should expect a spike in less than two weeks, public health experts say.”

“I don’t think there’s a question of whether there will be spikes in cases in 10 to 14 days,” a public-health researcher for Harvard University told a “climate change and technology” reporter for The Atlantic. “With so many protests happening, that are getting so much bigger, I don’t think it’s a question of if, but when and where.”

The article, written in first-person, carried advice to not shout or chant, but beat drums and hold signs. It also conveyed hints on how to endure pepper-spraying by police — but nothing about recent reports about how higher temperatures and direct sunlight may kill coronavirus (though the jury is still out as to what extent).

From the hip: Politics is about priorities, and media coverage is news selection based on what is considered the most important at the moment. Case in point: during recent severe storms in Texas, notices from TV news weather forecasters and National Weather Service experts alike urged everyone to temporarily set aside social distancing guidelines in order to take shelter. Without argument, a potentially deadly storm takes priority.

Back to the Floyd protests: while police brutality is an important issue, we observed the temporary amnesia of anything COVID-19 related as mainstream media gatekeepers put a higher premium on BLM-style protests. The Atlantic op-ed mentioned is Exhibit A:

Yet that risk does not lead [Maiuma] Majumder [an epidemiologist interviewed] to oppose the protests. “I personally believe that these particular protests—which demand justice for black and brown bodies that have been brutalized by the police—are a necessary action,” she said. “Structural racism has been a public-health crisis for much longer than the pandemic has.” Even the COVID-19 pandemic has harmed black people disproportionately …

[…] Protesting is protected by constitutional and international law, and yet, at this moment, inescapably dangerous.

Again, priorities. Religious expression apparently isn’t high enough on the list, even if included in the First Amendment along with protesting.

Lawsuits are beginning to mount concerning this unequal treatment by the political class. Arbitrary and contradictory rules will hopefully see their day in court when the fumigation smoke clears. This is where the real battle over quarantine orders will be fought, and long after we have given our leaders the benefit of the doubt during these uncertain times.

Interested in more news from Texas? We've got you covered! See More Texas News
Previous Article Texas official IDs Antifa members as organizing violent protests in state
Next Article You Might Be Missing A Race War Within The Louisiana Democrat Party