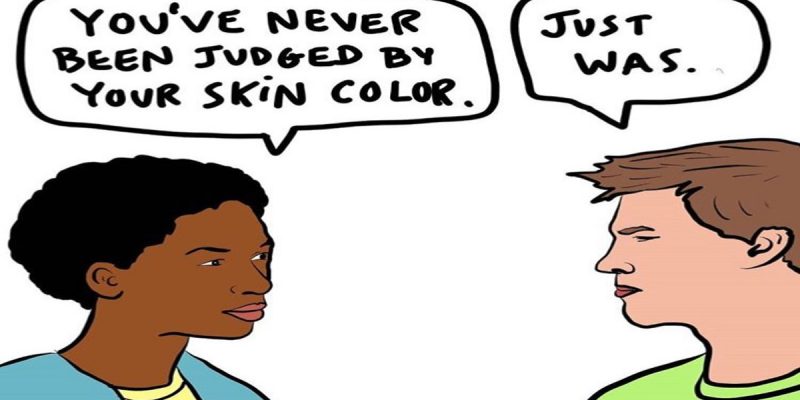 Here at The Hayride, I have remained somewhat quiet about this ridiculous moment in American history, in which we are required to accept a certain ideological perspective as fact or else suffer the consequence of the current cancel culture. It’s a rare sight to land on a website belonging to an entity of corporate America without being assaulted by messaging proclaiming that said corporate entity is on board with Black Lives Matter, and is thus donating x-amount of dollars to some outfit which purportedly furthers the cause of promoting racial equality, or the elimination of or amelioration of “white privilege.”

It doesn’t take a detailed examination to understand what any of that really is. These are corporations who are paying protection money to Democrat entities in order to insure that, in the event that Joe Biden wins the presidential election in November, they are the ones the crocodile eats last. And this entire ridiculous moment involves an ethnocentric narrative of the United States which demands that you accept the idea that race is the primary driver of the American experience, when this is a country that from its inception is explicitly not founded on race, but rather an idea – the idea that regardless of your ethnicity or your ancestry, you are entitled to the same intellectual and legal patrimony, and the benefits from it, that are shared by all of us within these shores.

Do we fall short of that ideal? Of course we do. All people, and all collections of people, fall short of their ideals. That’s why they’re called ideals. But no country has come closer to meeting its ideals than has the United States of America.

And yet this brilliant moral and intellectual patrimony is constantly micturated upon. So pervasive has the disparaging of America become that a Drew Brees is forced to quickly apologize for making a rather anodyne statement of patriotism.

It’s disgusting. It reduces the 250 years of America’s existence to almost nothing, as though our history was little more than a New World reprise of the Hun conquest or an improvement over what the Golden Horde were able to pull off in their day. Not a single American, regardless of ethnicity, should fail to be insulted at such an offensive suggestion. It is repugnant in the extreme given what we have striven for as a people.

You can get angry about this rhetorical atrocity if you want. You won’t be wrong if you do. I’m disgusted as well, because it’s the same old story that’s been the case for 100 years or more. There are people who like to flirt with the devil, and in the words of Alfred Pennyworth, who like to watch the world burn.

There are also people who simply don’t get what we are up against as a society. Remember, it was Lenin who first noted that a capitalist will sell you the rope by which you hang him.

It’s uncomfortable for normal folks to look at a moment like this, or any of the previous moments in human history in which the Hard Left was coming for regular people with an eye toward disrupting and destroying private property and individual freedom, particularly when you recognize the full menu of horrors on the table. Few people want to react to statist activism with the same vigor the radicals offer, especially when capitalism is loath to respond with death squads or street-brawlers.

But in America in 2020, we have the benefit of human experience and we damn sure ought to employ it before the current stupidity progresses any further.

We already know not only what Marxist economics produce. We also know what cultural Marxist sociology produces. We’ve seen it.

Thanks to the recent societal moment, with all its hard-core idiocy, we’ve seen it in technicolor.

We’ve seen it in the Capitol Hill Autonomous Zone (CHAZ), probably better described as Antifastan, in Seattle. There, we’ve seen that, in the absence of the Western capitalist society derived from the values of Christianity and Judaism which make the conduct of modern life possible, all hell breaks loose.

But I’m taking this moment as it comes. As Kurt Schlichter says, there is no reason to lose one’s cool over current events. If you’re able to apply a degree of composure, there is much reason to have faith the vast silent majority of Americans will in time express their opinions, and the full weight of that judgment is entirely likely to descend like an anvil upon the overrated radical fringe having their Summer Of Overexposure.

This isn’t likely to last. It’s a fad.

But having said that, I can’t just play Pollyanna and hope for the best, even though I believe it’s coming. Something more has to be said, and I don’t see quite enough people saying it. Because it isn’t enough to reject the garbage rhetoric of the Left on the basis of their results. It’s worse than that. The fundamentals of the Antifa/Black Lives Matter movement are obnoxious enough that they must be challenged at their root.

But the worst of this is the race angle, which is the genesis of this business of “privilege” the majority of Americans are now required to wear a hair-shirt over.

What I hate most about this stupid moment is this demand that I think of myself as “white.”

I’m disgusted at the idea that I have to think of myself as much of anything. I’m not a big Ron Paul fan, but one thing he said that was absolutely spot on was that racism is collectivism, and I am absolutely not a collectivist.

Here’s a quick thought experiment that will enforce that reality – who’s the Irish-American, or Korean-American, or Polish-American, Jesse Jackson? You can’t name him, and that’s not because you’re not suitably informed – there are no such people. Those groups have done pretty damned well in America because they operate mostly on the basis of family and individual achievement and not on the basis of collective salvation, which is a societal dumpster fire of irreparable repute. Start in with race, and in this discussion you drop out family, the primary determinant of individual mobility, and your argument becomes garbage as far as I’m concerned.

I think of myself as American, not white. And if i have to break it down further than that I think of myself as either Scottish, which is half of my ancestry (the “macaoidh” you see in the byline above is the Gaelic spelling of McKay, which is my last name) or Cajun, which is the other half. And if I’m going to assess myself and who I am in the context of what “privilege” or whatever it is you impose on me, I’m going to demand the experience of my family, which is by no means without adversity despite the fact I’m damned proud of my ancestors, be brought into consideration.

Mt people weren’t nobility. My people were dirt poor. They came to this country to escape poverty and oppression, and they came with nothing but the shirts on their backs. So far as I know, none of them ever owned a slave. If I’m “privileged,” it’s because I stand on the shoulders of some tough people who busted their rear ends to earn that privilege for me, and the last thing you’ll ever get me to do is to trash their efforts by accepting guilt for their accomplishments.

Making me “white” lumps me in with lots of people I don’t give a damn about. I have less in common with Polish Americans in Wisconsin than I do with black Americans in Baton Rouge. On what basis do you insist otherwise?

Because of what? Skin color? How dare you? And who are you to allege every black person around me is oppressed and wretched? Who’s the racist in that conversation?

And reducing me to “white” and then demanding that I apologize for it makes me want to punch your lights out. You’re dangerously close to the Italian Fascists and German Nazis who identified certain classes, or racial groups, and then insisted they somehow suddenly bore collective responsibility for whatever negative results which had to be addressed by public policy, or worse…leading all the way up to genocide.

To me, this is actionable in a kinetic fashion.

Take that how you will.

Especially when that reaction is specifically based on a rejection of race as the animating factor of my existence. And yours.

I don’t work that way. Why, beyond your bullshit politics, do you? It doesn’t at least offend your sense of humanity to operate that way?

What these morons are doing is forcing people of European ancestry, and specifically those of European ancestry who are justifiably proud of their ethnicity, into a mentality in which they see themselves as an aggrieved class of people who behave accordingly. They’re FUELING what they would term “white supremacy” rather than destroying it.

Nothing good comes from doing this. Nothing good ever comes from forcing people into a collective mentality which isn’t inclusive of a national identity, which is certainly not what today’s Left is trying to do to us.

I think they know all this. I think it’s reasonable to make them answer for their rhetoric along these lines. I think people they categorize as “white” are entitled to ask why it is that if you come from a continent with one of the most diverse cultural patrimonies on the planet it somehow brands you as a member of some overbroad demographic group you don’t even recognize as yours. After all, they’ve attempted to lump all the people currently living in Europe into the same kind of collective existence the racial bean-counters are trying to impose on their ethnic cousins in America, and the Europeans are fairly resistant to being so corralled.

Especially when what you likely want more than anything is just to be known as an American.

This is all about divide-and-conquer. What it’s really about is destroying your patriotism.

I will not be forced into your demographic shock-troop cadres. I absolutely refuse to allow you to define me in any way that I do not choose. You do not have the right to impose that upon me.

In fact, I will fight you to the bitter end on this score, no matter what that fight requires. And that should be read to recognize no limit whatsoever. The American experience which has survived from the beginning of the nation’s existence, from the Boston Massacre to the March on Washington, to the address atop the heap of 9/11 debris, is mine.

It’s mine. All of it. Even the bad stuff, which I insist we memorialize along with the good that we might learn something from it.

It’s not yours. Not when you claim it in a different context than I do. Particularly when you don’t believe in the principles which could make it yours. You can’t claim it at the same time you claim Che Guevara or Ethel Rosenberg or Emma Goldman. By your affinity for those atrocious people you disqualify yourself as an inheritor of my American patrimony, which you in any event disparage as somehow dishonorable or morally deficient.

And I will not surrender it to you.

No matter what you demand, and no matter what you propose to take from me. You are not stronger than I am, and you will not win this fight. You will lose, no matter what I, and the tens or hundreds of millions of American patriots who stand with me, have to sacrifice to insure you lose.

Your move, commies. How far are you willing to go?