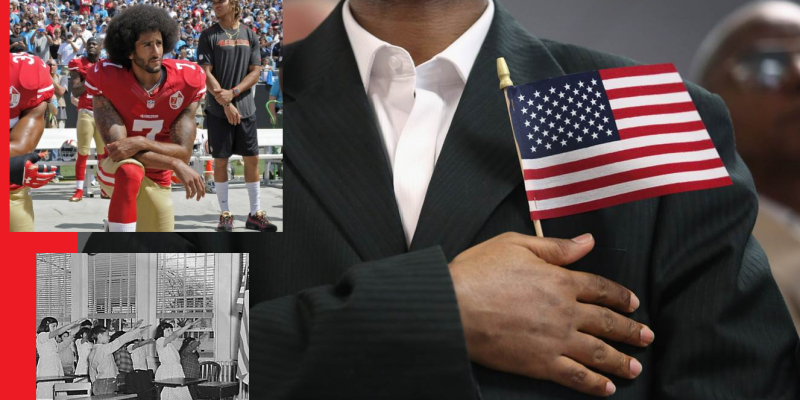 (A note to anyone taking a knee during the National Anthem to protest of police brutality or in support of racial identity politics: The hand-over-heart-while-standing salute is the original protest against fascism — which we learned by looking in to the proper way to salute the flag.)

We all know from toddler-hood on up what to do when the U.S. flag is presented ceremonially: stand up with your right hand over your heart, and hats off. But it was not always this way, even 100 years before Colin Kaepernick.

State flag salutes often follow the same protocol, though every so often you see the occasional standout with an outstretched arm and a right hand held in the direction of the flag. And they’re not protesting.

This writer, a native of rural Texas, was one of those hold-outs with an outstretched arm during the pledge to the Texas flag until looking up the Texas Flag Code. Yes, there is such a thing at the Texas Flag Code, and it makes the salute procedure very clear:

Sec. 3100.104. RECITING PLEDGE. If the pledge to the state flag is recited, each person who is present and:

(A) face the state flag and stand at attention with the person’s right hand over the heart;

(2) not in uniform and a member of the armed forces or a veteran may make the military salute and recite the pledge; or

(3) in uniform should remain silent, face the flag, and make the military salute.

Though the state flag code is quite clear, the alternative-but-seldom-seen outstretched-arm salute is not exactly a Texas tall tale. It has a history going back well-over a century — maybe even to the Roman Empire — but got caught up in politics between World War I and World War II.

The Texas Flag Code of 1933 was adopted nearly a decade before the U.S. salute was codified. But on Dec. 22, 1942, lawmakers passed a bill amending the U.S. Flag Code to mandate that the Pledge of Allegiance should “be rendered by standing with the right hand over the heart,” which remains today.

As it happens, saluting the flag used to be done by extending the arm, hand, and fingers outward — the “Bellamy salute” as it’s sometimes referred to. We’ll use that term.

The Bellamy salute came into being on Oct. 12, 1892, according to Christian Socialist Francis Bellamy‘s published instructions for how to celebrate Columbus Day. This was during a time of the U.S. developing as a military power across the globe as well as an increasingly popular destination for immigrants seeking better opportunities. The fear, even among Socialists of the time, was that following the Civil War patriotism was at a low point and national identity was unclear. According to Bellamy’s instructions, the principal of each school was to order the students to stand in ranks, hands to the side, and face to the flag. After the signal was given, every student was to give the flag “the military salute” [note: not the one with a hand to a hat brim or just above the eyebrow] — “right hand lifted, palm downward, to align with the forehead and close to it.” Then came the recitation of the Pledge of Allegiance, and when the phrase “to my flag” was recited, the palm was to be flipped upward. From Bellamy’s guide:

Standing thus, all repeat together, slowly, “I pledge allegiance to my Flag and the Republic for which it stands; one Nation indivisible, with Liberty and Justice for all.” [“Under God” wasn’t added until the 1950s by Congress.] At the words, “to my Flag,” the right hand is extended gracefully, palm upward, toward the Flag, and remains in this gesture till the end of the affirmation; whereupon all hands immediately drop to the side.

Let’s review, class: arm out, palm down, until you got to the part about the flag, then it was palm upward.

An earlier version of the salute, adopted in 1887 but never as popular, known as the Balch Salute, accompanied a recitation of the George Balch pledge. Balch, who was far from a Socialist, instructed students to stand with their right hand outstretched toward the flag, the fingers of which are then brought to the forehead, followed by being placed flat over the heart, and finally falling to the side. (Confused yet? Hang on to that hand-over-the-heart detail.)

Bellamy’s Pledge of Allegiance, popularized by the National Education Association, was not universal in schools or public assemblies for many years. Popularity of the Bellamy salute and pledge-recitation grew slowly for national and state flags alike.

Acceptance of the Bellamy salute hit a road bump in the 1920s, as Italian fascists adopted what has been called “the Roman salute” to symbolize their claim to have revitalized Italy on the model of ancient Rome. Soon a similar ritual was adopted by the German Nazis. Visuals of rising fascist movements in newspapers and magazines, a growing number of filmed news reels, associated the raised-arm salute with the totalitarianism the U.S. military had fought during World War I.

School boards around the country revised the salute to avoid this similarity, often reverting to some variation of Balch’s concept with a hand over the heart. There was a counter-backlash from the United States Flag Association and the Daughters of the American Revolution, who felt it inappropriate for Americans to have to change the traditional salute because foreigners had later adopted a similar gesture. Apparently, Texas disagreed and disassociated itself with European fascism. They probably were not too keen on “Christian Socialism,” either.

Around 1939, when Pearl Harbor was attacked, public opinion concerning the U.S.’s involvement in World War II solidified and along with that came a healthy fear of socialism and fascism. Americans were on-watch for foreign propaganda — even questioning the patriotism of aviation pioneer Charles Lindbergh. Lindy had appeared in many photos giving the Bellamy salute, but because he was in favor of non-intervention he was accused of supporting Hitler’s regime.

The popularity of the Bellamy salute quickly subsided as the U.S. entered the war.

In 1942, at the urging of the American Legion and the Veterans of Foreign Wars, Congress passed Public Law 77-623, which briefly codified a combination of the Bellamy salute and the one Americans know today. This salute was “rendered by standing with the right hand over the heart; extending the right hand, palm upward, toward the flag at the words ‘to the flag’ and holding this position until the end, when the hand drops to the side.”

Congress later that year passed Public Law 77-829 which simplified the pledge salute to “standing with the right hand over the heart.”

Communication being was it was during the 1930s and ’40s, state flag code changes were likely not conveyed as widely as Congress’s actions on how to salute. Rural and under-developed areas of the country may have retained the Bellamy salute for state flag pledges. Many likely assumed Congress clarified how to salute the U.S. flag but left alone the state salutes.

In conclusion: In Texas, the salute is the same as it is for both the federal and state flags — hand or hat over the heart. Information is harder to come by for specific states, but it appears the overwhelmingly common practice is to hold the hand or hat over one’s heart while standing.

If you have any information regarding your state’s flag salute, let us know in the comments. Until then, if anyone accuses you of being a fascist for rendering the older Bellamy or Balch salutes, show them this article. We’re happy to get you off the hook.

And for those planning on taking a knee today to protest “fascism” … please read a book.

Interested in more national news? We've got you covered! See More National News
Previous Article Democrat Congressional Candidate Confuses Police With Rioters In ‘Burn It To The Ground’ Remark
Next Article What Happens Now That JBE Has Vetoed Tort Reform?