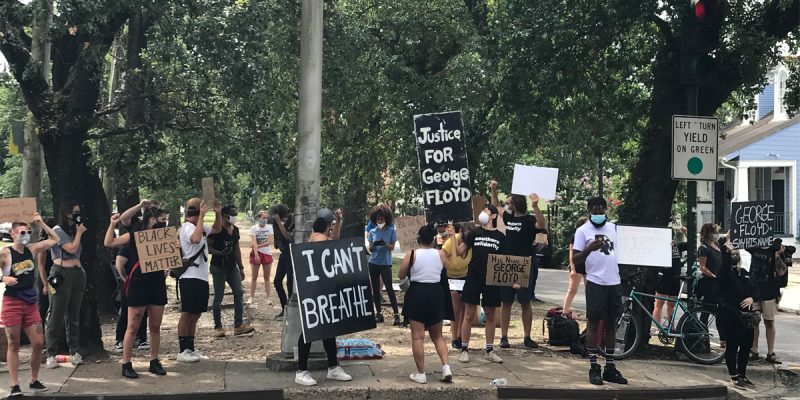 Because clearly the crisis over the virus is no longer a problem for Louisiana after the same people who have howled and screamed about how Louisiana has to be shut down because otherwise we’re all going to die.

Then, last week a bad cop in Minneapolis, whose record contained almost too many incidences of misbehavior to count, killed an arrestee who was caught trying to pass a counterfeit $20 bill as bystanders recorded him doing it. Derek Chauvin kneeled on George Floyd’s neck for several minutes, killing him in broad daylight on the street. We don’t know the whole story of the encounter, but it doesn’t really matter – clearly it’s police brutality to kneel on a man’s neck, and when you do it long enough that the man dies you’re at fault.

By Friday Chauvin, who had been immediately fired, was charged with third-degree murder and rightly so. Almost nobody in America disagrees with the notion that he ought to be tried and, in the likely event he’s found guilty, punished to the full extent of the law. But protests of Floyd’s death turned violent almost immediately, and more than 30 cities around the country saw looting, burning and mayhem in the streets. In nearly every case the cities where violence occurred are run exclusively by Democrats; in most, the states in which those cities were located were also run by Democrats. There were exceptions; Dallas is in Texas, for example, and Atlanta is in Georgia.

But in Minneapolis, the rioting commenced almost immediately after that city’s Democrat mayor Jacob Frey waxed philosophic about the 400-year history of racism and oppression of black people, and then Frey signaled that the same police department which has been solely employed by Democrat leadership since 1961 and has been commonly guilty of mistreating citizens across the racial divide would not so much as defend one of its own precinct buildings, which the crowd of rioters proceeded to burn.

Half the “protesters” in Minneapolis were white. More than half in other cities have been white. By the weekend President Trump hit the nail on the head in noting what is actually going on is an insurrection led by the radical group Antifa, which he is designating as a domestic terror group. The leftist legacy media is now attempting to spread the myth that the pale-faced rioters in the streets are actually “white supremacists,” to imply that they’re Trump voters. If that were true, one would expect the police would be out in force cracking skulls to enforce the peace, because if anybody is subject to having their activities crushed with extreme prejudice it’s “white supremacists.”

And yet the looting and burning continues apace.

Luckily, there hasn’t been any looting or burning here in Louisiana. What happened instead was a complete repudiation of the bans on public gatherings and other forms of the COVID-19 lockdown.

For example, in New Orleans…

And in Baton Rouge…

Hundreds gathered in downtown Baton Rouge Sunday, May 31, to march toward the Louisiana State Capitol in objection to the excessive use of force by members of law enforcement, particularly during interactions with black Americans and communities of color.

Baton Rouge Mayor-President Sharon Weston Broome prayed with those gathered before marching began. Other city and state officials spoke with individual participants about concerns in their communities.

Participants carried signs with various messages which conveyed they would not tolerate law enforcement brutality or forget those who have lost their lives while in custody.

March getting underway in downtown Baton Rouge. Marchers are leaving Galvez Plaza and headed to the capitol. pic.twitter.com/n0PNkqPnCI

It’s nice there was no looting or burning, though last night a group of “protesters” decided they’d gather on Siegen Lane near the city’s commercial areas which raised the specter of Minneapolis, Atlanta, Washington and Los Angeles.

The cops didn’t put up with that, and things never escalated to the riot stage.

A large, peaceful demonstration occurred Sunday afternoon on the front steps of Louisiana’s State Capitol Building in downtown Baton Rouge, but later that night a much more heated protest occurred on Siegen Lane.

Deputies with the East Baton Rouge Parish Sheriff’s Office were dispatched to keep the crowds under control and prevent marches from spilling over into the street.

The crowds were gathered to speak out against police brutality. Their efforts were in response to the recent murder of an unarmed black man named George Floyd in Minneapolis.

Floyd was killed while being arrested by a police officer who has since been fired and arrested.

The crowds on Siegen Lane broke up around 1:30 a.m. Though no arrests were made during the incident, emotions ran high and by the close of the event, law enforcement were reportedly searching for one suspect.

All of this is good, and we’re heartened by it for two reasons.

First, it appears we don’t have enough Antifa thugs in Louisiana to make a critical mass of rioters, and thus our cities aren’t in immediate danger of being burned to the ground like in some other places. Perhaps the state’s leadership is more competent than in places like Pennsylvania or Minnesota, though we’re unconvinced of that beyond noting that East Baton Rouge Sheriff Sid Gautreaux is less likely than most to tolerate the pillaging of the city’s retail areas.

What’s probably a better assessment is that Louisiana’s people are too congenial for rioting, something that was generally proven four years ago with the Alton Sterling fracas. Those protests were voluminous, but as idiotic as they were and as much bad behavior as they contained, they didn’t turn into mayhem.

But secondly, there is now zero reason for anyone to continue the lockdowns. Because if a thousand people can take to the streets marching in close quarters to protest something that happened 1000 miles away and nobody is concerned about catching COVID-19, then there is zero reason why anybody should be concerned if 50 or 100 people were to show up at a bar looking to have a drink.

At 2:30 this afternoon, Gov. John Bel Edwards is scheduled to make an announcement on whether Louisiana moves to a Phase 2 reopening. There is zero reason for him not to do so, though there have been polls saying public opinion is soft on the subject and Edwards’ flacks are signaling he might not actually continue with the state’s reopening.

If that ends up happening, let’s hope the Louisiana legislature, which will be at the Capitol all day, acts quickly to put this lockdown to bed. Rep. Alan Seabaugh’s petition to strip the governor’s emergency powers sits at 37 signatures, only 16 short of a majority. The only justification Edwards has offered against the petition has been that it would cost the state federal money, which rings hollow seeing as though he’s busy working with the legislature to appropriate $1.8 billion Louisiana already has in hand.

We’re happy to find silver linings where we can. In Louisiana we’re confident that the shutdown is now over, because otherwise it would be absurd.