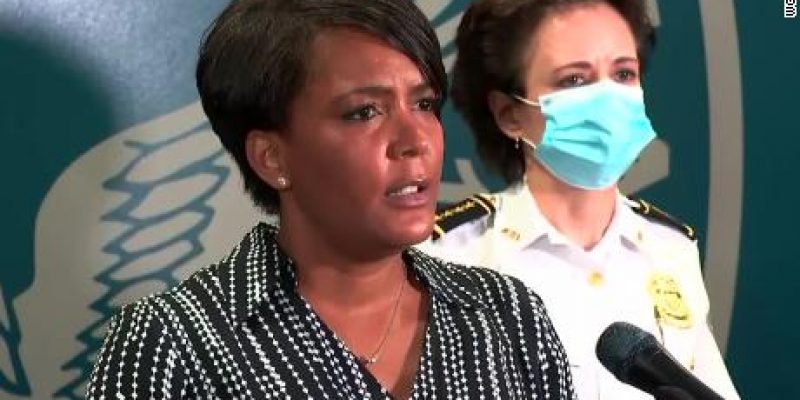 She addressed the riotous masses like Beowulf’s angry mother. The question is, however, will the message fall on deaf ears?

The biggest answer to that question is predicated on how many of these rioters are not paid for and how many are.

President Trump needs to choose his words better at times, and clearly activists need to monitor their wardrobe choices when making peace-inspired speeches.

The true star of the show was Mayor Bottoms. She was scathing in her remarks, holding nothing back in her attempts to chop down this growing enemy.

The mayor made the point so many Americans always arrive at when these dramas play out like this: Such violence and destruction make any noble purpose null and void. It also makes Americans originally inclined to honor the memory of George Floyd forget, not because of race, but because of basic human nature: There was no time to grieve his death or have a constructive conversation; instead, immediately, there was a new story, a new fear on the heels of COVID, and the latest terrorism on our soil to wrap their heads around.

“You’re not gonna out-concern me and out-care about where we are in America. I pray over my children each and every day. So what I see happening on the streets of Atlanta is not Atlanta.… When Dr. King was assassinated, we didn’t do this to our city. This city, that has had a history of black mayors and black police chiefs, and people who care about this city…if you care about this city, then go home.

“You’re not honoring a legacy of Martin Luther King, Jr and the civil rights movement. You’re not protesting anything running out with brown liquor in your hands, breaking windows in this city.… You’re throwing knives at our police officers. You’re burning cars.… This is not the legacy of civil rights in America. This is chaos, and we’re buying into it. This won’t change anything. We’re no longer talking about the murder of an innocent man. We’re talking about how you’re burning police cars on the streets of Atlanta, Georgia.”

She also pointed out that the destruction raging in our cities is not “protesting,” that these criminals are only wiping out essential small businesses for the economy, many of them owned by black Americans.

Keisha Lance Bottoms was a mayor on Friday. She was also an angry mama. Her words clearly didn’t resonate across the country this past weekend, but hopefully, with persistence, they soon will. But sadly, if most of these rioters are not in fact locals, but instead are paid plants as this multi-city drama seems to entail, it may very well be that the wrong people are listening.

Interested in more national news? We've got you covered! See More National News
Previous Article ALEXANDER: “A Clear And Present Danger To National Security”
Next Article Well, At Least We Can Feel Good About The COVID-19 Crisis Being Over