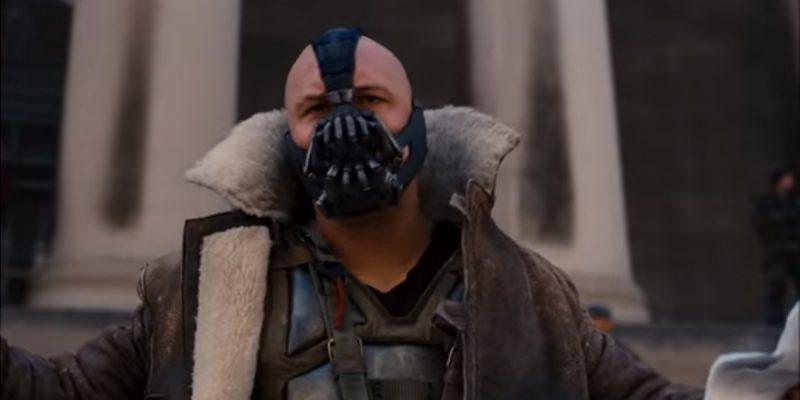 Literally, it’s a movie. Christian Bale and Tom Hardy were in it.

Oh, you don’t remember it? Well, here’s a clip…

Anybody who thinks you can have functioning American cities as currently governed without the police keeping the animals who inhabit those cities isn’t stupid or insane, they’re evil. They know precisely what they’re doing and it’s what they want.

I’ve posted both here at The Hayride and at The American Spectator that what we’re really seeing with all these protests and the ever-worsening calls for unworkable public policy from the people organizing them is an attempt at fomenting a Marxist revolution. Chris Holton posted much the same in his piece this morning.

It goes like this – the people behind all this stuff are avowed Marxists. That is no secret.

A communist revolutionary is compelled to incite the proletariat to begin Marx’ long-awaited revolution.

And these communist revolutionaries see black people in the cities as the proletariat who must be incited.

How do you incite people to revolution? You make them miserable.

This started, after America won the Cold War and made the idea of a communist regime in charge of this country an absurdity, with a rediscovery of cultural Marxism in the arts and academia in the late 1980’s and early 1990’s. Back then it was known as the “PC movement,” and it was the precursor to a lot of the abject stupidity you see on the streets today. Political correctness didn’t really take off outside of the academy; not for a long time. By the late 1990’s and early 2000’s, most people thought America’s racial issues were waning. The country had other things to be concerned with, like for example international terrorism and various other domestic social problems which were related, but not directly, to race.

That couldn’t be allowed to continue improving. It couldn’t happen. Especially when in 2008, through a startling alignment of the planets, America showed how little racism actually existed in the country by electing a totally unqualified black guy as president mostly in an effort to exorcise those demons the Hard Left had been demanding be addressed. Rather than fix things, Barack Obama made them infinitely worse.

Why? Because the proles must be made miserable so as to revolt.

You’ve heard a lot about white flight. What cities have white flight? Democrat-run cities. White flight needs to be properly understood, by the way, as not being unanimously white. It’s middle-class flight. Run a city poorly, and middle-class people, most of whom are white but who come in all colors, will get the hell out when they can.

And leftist Democrats have near-unanimously run cities poorly for decades.

Who’s left when the middle class leaves? A few rich people and lots of the proletariat. And those are the people who must be made into revolutionary shock troops.

So what do you do? Run police departments which, justifiably, act like occupying armies. They have to act that way, because the economic policies of the urban Democrats in charge make it difficult if not impossible to profitably operate a small business, and difficult if not impossible for regular people to live like something other than the poor, so you have disaffected people who lack confidence in their own future and who are destitute with nothing to lose from engaging in criminal behavior.

Those people also come up in government schools which studiously avoid teaching them (1) marketable skills and (2) values commensurate with good citizenship. Without either element they’re quite likely to be miserable, and they’ll engage in the kind of pathological behavior which makes those around them demand radical change. Feed them unattractive public art and architecture and bombard them with constant dispiriting cultural signals, and watch them seethe at their circumstances.

Then, when tensions between the disaffected and the police who vainly attempt to keep a lid on this boiling cauldron you’ve created, provide the spark.

Give a protester a brick. Or be the first to throw it through a store window.

Now those disaffected, miserable, hopeless people loot the store. And when they do, they destroy, probably forever, what local neighborhood economy there is. Those store owners, be they mom and pop people or corporations, won’t return to the scene of their destruction, so the people they formerly served become even more deprived and miserable.

And now you want to defund the police in these same areas.

When the police go, and the vacuum is created, who do you think fills it?

In Mexico it’s the drug cartels. In America it’ll likely be something similar. Or maybe worse.

The traditional pattern is that when the true monsters arrive following the revolution, the first people they liquidate are the “liberals,” the well-meaning faux radicals who want a different life for other people but not themselves. Play with fire, and you’ll get burned.

They’ve probably permanently destroyed police departments in places like New York, Los Angeles, Minneapolis and St. Louis. Interestingly, we would bet they’ve done no such thing in the suburbs.

In The Dark Knight Rises, Gotham is surrounded by the military, and the criminal menace that sweeps through the city is contained in that space. You don’t see the suburbs suffering in that movie.

It’s interesting how life can imitate art. Watch how this “defund the police” movement plays out. It’ll be familiar to you.

Interested in more national news? We've got you covered! See More National News
Previous Article No, SIG Sauer Is Not Bankrupt; Gun Sales Are Booming
Next Article ALEXANDER: Madness In Minneapolis As The Police Are Disbanded