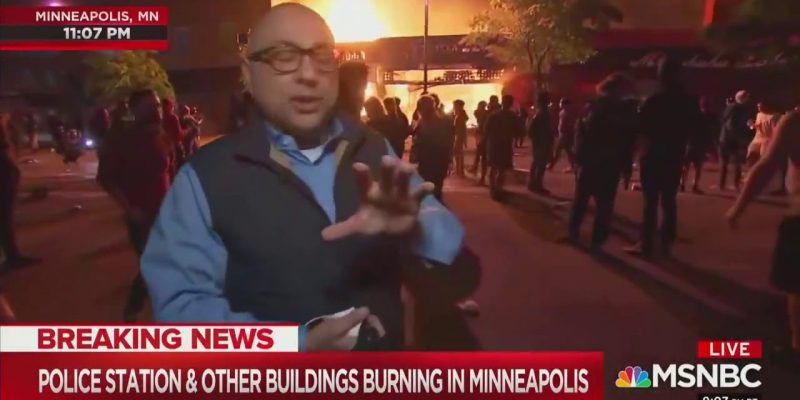 I read a comment of Democrat presidential candidate, Joe Biden, this week in response to President Trump’s decision to send in federal troops to protect federal property in several major American cities that remain engulfed in, and besieged by, threats of harm to individuals and police, looting and destruction of property. Biden stated that “there is no reason for the President to send federal troops into a city where people are demanding change peacefully.” That really caught my attention. “Demanding change peacefully?”

My first thought was that Mr. Biden’s mental faculties are truly failing him. My second thought was that if this is what he thinks “peacefully” demanding change looks like I would be very interested to know what he thought qualified as riots, violence, vandalism and crime. I also found stunning the comment of Portland’s mayor, Ted Wheeler, that the federal presence “is actually leading to more violence and more vandalism.” Mayor Wheeler has since tweeted attacks on Pres. Trump’s decision as an “attack on our democracy” with his “paramilitary squads,” as well as the “violence federal officers brought to our street.” Is he insane? When law and order are gone we, by definition, no longer have “democracy,” and the “violence” he feels federal officers have brought absolutely pales in comparison to the violence that existed in Portland months before federal troops arrived to protect federal property.

I think that to truly understand the crime, destruction and breakdown of law and order we continue to witness in cities like New York City, Portland, Seattle, Chicago, Philadelphia and San Francisco we must understand what kind of elected officials have been making these decisions. For decades, Democrat mayors and city leadership (and often, governors) have been comprised of individuals who are distinctly liberal and Leftist. It is these “leaders” who have decided that the current problem is not the crime, violence and destruction caused by these “peaceful” protestors but rather is law enforcement—including the federal troops President Trump is now sending in to protect federal property. This view of law, government, and social order has been deemed “progressive.” Many of us, no doubt, regard it as highly “regressive.” Prosecutors won’t prosecute and police don’t fully engage for fear of being punished or terminated for merely enforcing the law. Criminals are praised and those who seek law and order are portrayed as guilty, and at fault.

I also cannot neglect to mention the decision of the top prosecutor in St. Louis who has decided to charge with a crime the armed couple who rebuffed the group of “peaceful protesters” who were coming toward them and trespassing onto their property. The prosecutor stated that, by standing there and protecting themselves and defending their property, they “risked creating a violent situation” during an otherwise “peaceful protest.” Again, words have lost their meaning and the truth is perverted. If the couple hadn’t been armed they might be dead or seriously injured and their property destroyed. And now, not to be outdone, Philadelphia District Attorney Larry Krasner said in an interview published Wednesday that he is prepared to arrest federal law enforcement officers sent by the Trump administration to quell violence in inner cities, and appeared to compare those officers to Nazis.

This is all upside down and backwards. Evil is being called good and good, evil. Right is scorned while wrong is praised. We have tolerated this indefensible lawlessness for months now. Without the safety and security made possible by law and order, the constitutional guarantees of life, liberty, property and the pursuit of happiness are lost. In the meantime, a multitude, with quiet dignity, faith, and love of country in its heart, turns its eyes to November.