…which is a good bit more than Cassidy or his people expected. This has been a pretty busy week of qualifying for the November elections so far.

So who are the 13 candidates for the Senate seat Cassidy currently holds? Well, here’s the list… 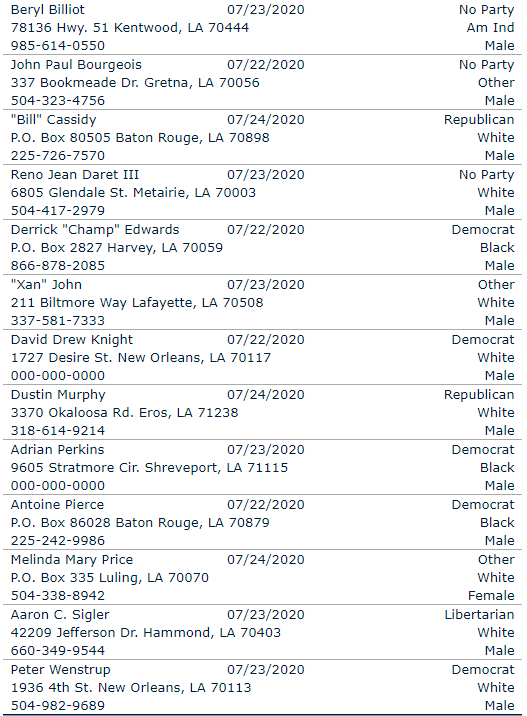 Of the group, Perkins is the one with any chance of making a race against Cassidy. The others might collectively pull just enough votes to keep the Republican incumbent from topping 50 percent in the primary – though that’s not something we’d bet the farm on.

What else is happening as qualifying wraps up today? Well, there are the congressional races. Only one of them looks like it will be much of a contest – that being the open seat in Louisiana’s 5th Congressional District. In the others, the incumbents are almost assuredly headed for re-election.

Everybody has opposition, though – none of the congressmen are running unopposed.

In the 2nd District, Cedric Richmond has drawn four opponents: Republicans David Schilling of Hahnville and Sheldon Vincent of Harvey, along with independent Belden “Noonie Man” Batiste and Democrat Glenn Harris, both of New Orleans. Schilling is white; the others are black.

Clay Higgins has two Democrats and a Libertarian lined up against him in the 3rd District. Rob Anderson of Sulphur ran against Higgins two years ago and fared exceedingly poorly; this time Anderson is joined by Braylon Harris of Lake Charles. Anderson is white while Harris is black. Libertarian Brandon Leleux of Lake Charles is also in the race.

In the 4th District, Mike Johnson has three opponents. Republican Ben Gibson of Bossier City is in the race, as are Shreveport Democrats Kenny Houston and Ryan Trundle. Houston is black, the others white.

And in the 6th District, Garret Graves has only one challenger, independent Richard “RPT” Torregano.

None of the congressional challengers outside the 5th District has ever held significant elected office.

But the 5th District is much more of a wide open brawl, and accordingly there are seven contestants for the seat being vacated by Ralph Abraham’s retirement. The list… 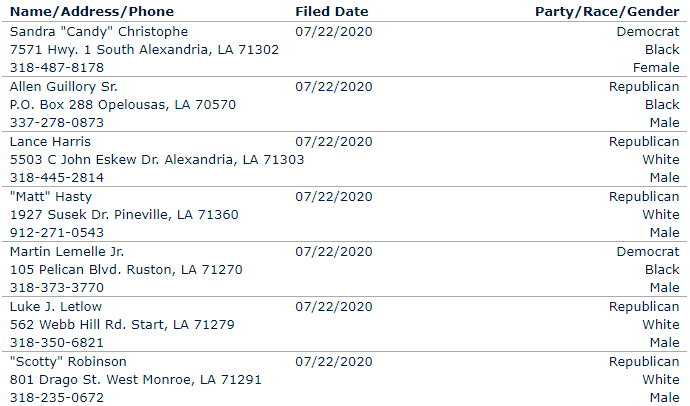 The general understanding is that Letlow and Harris are the most notable candidates in the race, though Christophe might be a threat to edge one of them and make the runoff with the other. We’re a long way from knowing which is which.

In other races of note set for the November elections, an old political name resurfaced in the 1st District Public Service Commission race, as John Schwegmann of the old Schwegmann’s grocery chain entered the race as a No Party candidate against incumbent Republican Eric Skrmetta. Years and years ago when Schwegmann groceries were still in business, it was considered a prerequisite to election to successfully court the Schwegmann family endorsement and thus have your name and face printed on their paper grocery bags. But that was long, long ago and no serious observer thinks Schwegmann or the other two challengers, Green Party candidate William Boartfield or Republican Richie Sanderson, have any chance at winning.

But a different PSC challenger could be more of a threat. In the Commission’s 5th District, incumbent Foster Campbell picked up an interesting challenger who could have some support. Shane Smiley is an anesthetist and a member of the Ouachita Parish Police Jury, a position he’s held since 2007. Smiley is the president of that body.

“Foster Campbell has been in office for 45 years; I think 45 years is long enough,” said Smiley, a nurse anesthetist and small business owner. “It’s time to send him home.

“I’m a lifelong Republican with conservative values that I believe resonate across northern Louisiana and better reflect the constituency of the district,” Smiley said. “I’m going to bring a newer, fresh approach to the commission. I love being on the jury, but I want to take my experience and apply it to the PSC.”

Smiley is well-connected, including, we’re told, ties to the well-heeled and influential Davison family. He could be a strong challenger to Campbell in a part of the state which demonstrated earlier this month with Friday Ellis’ upset win over incumbent Jamie Mayo in the Monroe mayor’s race that status-quo Democrats are in no particular favor.

There are oodles of judicial races on tap around the state as well.

The Campbell-Smiley PSC contest, the Baton Rouge mayoral race, the Senate race and the 5th District congressional races are the big-ticket, contested items on the November ballot along with the presidential election. We’ll know by the end of the day if there are any further developments and will update this post accordingly.