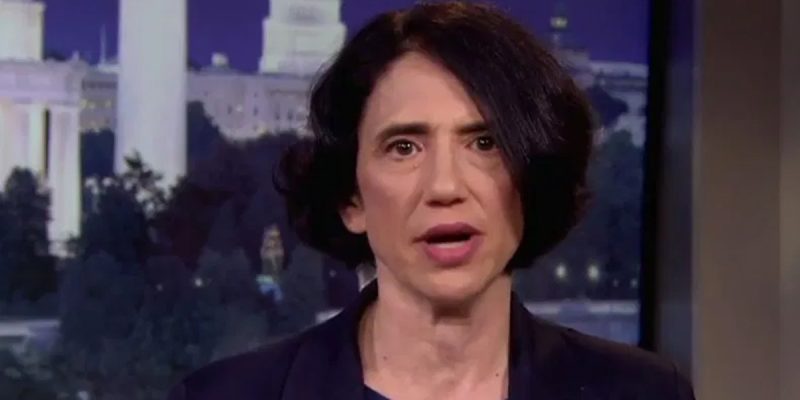 So here’s a screenshot of a tweet by the Amazon Post’s “conservative” columnist Jennifer Rubin, who long ago was actually capable of a reasonable take once in a while but with the coming of Donald Trump to the political scene has descended into utter lunacy.

We’re using a screenshot here because there are better-than-even odds the tweet is going to vanish. But here you go… 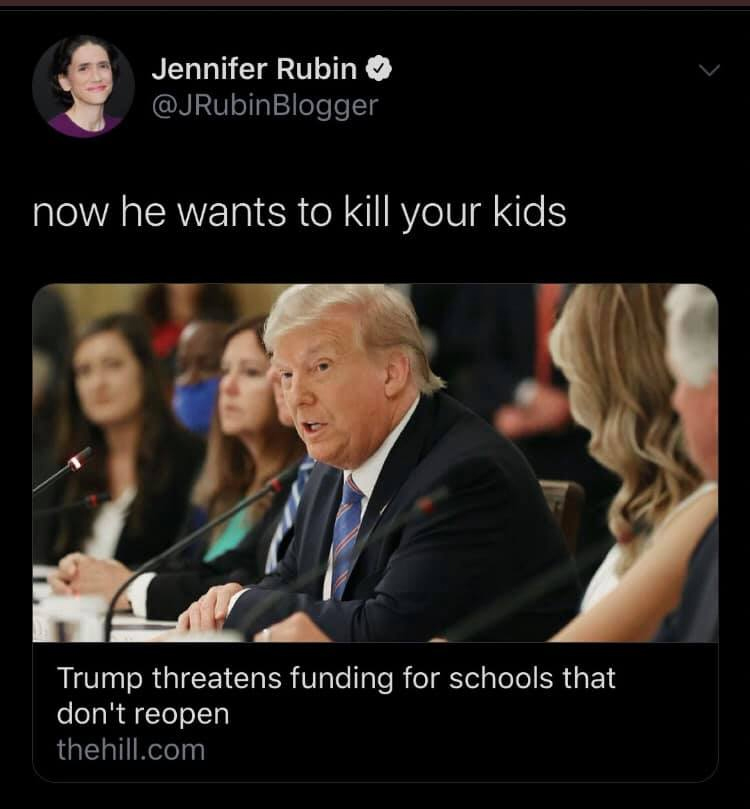 We could write a book on how pathetically stupid a take this is.

Are you aware of the fact that in Great Britain the schools never closed? There’s a reason for that – it’s accepted as fact, based on evidence, that there is virtually zero risk of death or even serious illness for children where COVID-19 is concerned. It is literally absurd for Rubin to babble about Trump killing kids by advocating the reopening of schools.

Here’s what the President is actually doing…

President Trump on Wednesday threatened to cut off federal funding for schools if they do not resume in-person learning this fall and criticized a top government health agency for being too tough with its guidelines to aid that process.

“The Dems think it would be bad for them politically if U.S. schools open before the November Election, but is important for the children & families. May cut off funding if not open!” Trump tweeted.

In a separate tweet, Trump said he disagreed with the Centers for Disease Control and Prevention (CDC) “on their very tough & expensive guidelines for opening schools. While they want them open, they are asking schools to do very impractical things. I will be meeting with them!!!”

The president and his allies have mounted a full-court press this week to urge school administrators and local officials to resume in-person learning as they encourage the country to get back to normal despite surging coronavirus cases in many states.

Trump said a day earlier he would pressure governors to reopen schools, and Education Secretary Betsy DeVos told state leaders on a conference call that plans to only allow in-person activities a few days a week were unacceptable.

There are lots of good reasons Trump is doing what he’s doing.

First, getting the schools reopened is a prerequisite to getting the economy fully restarted. Working parents have to have a place to stash their kids during the day when they go to the office, and though COVID-19 is inevitably going to have an effect on millions of families who have been forced to examine options for homeschooling and found those options not only workable but superior to the terrible government schools they’ve been stuck with, we aren’t at the point yet where public education can be abandoned altogether. The market hasn’t expanded to offer sufficient alternatives for masses of families deciding to escape the government schools.

Now, if you’re a Marxist revolutionary like Ilhan Omar who wants to replace our law, economy and culture with that of some Third World shithole alternative like where she came from, keeping the schools closed long enough to elect Joe Biden president is a swell idea. No intelligent person could see that as a viable option for this country’s survival, nor is it reason to disrupt the lives of a huge portion of the country.

But just as importantly, if schools don’t reopen, then exactly what are we paying for?

We’re spending somewhere in the neighborhood of $15,000 per student per year on K-12 education in this country, and the result of that spending as is doesn’t exactly impress – particularly when you see what’s happening in the streets of our cities, which are the places where that $15,000 number is usually considerably more. So now the school districts catching that money are saying they won’t be fully functional.

The list of offerings comes off like the adults doing what works for them, and screw the kids and parents. Two days a week they’ll have in-person classes, the rest will be remote learning. No high school sports in some places, so no physical development of the kids, who are physically softer now than ever before, and no development of team skills or the work ethic sports instills in kids. Teacher unions are screaming that the kids will infect and kill their members. And on and on.

We’re supposed to pay full price for that? Why? What’s in it for the taxpayers?

And why is Trump unreasonable for demanding that local school systems uphold their end of the bargain if they’re going to bring in federal education dollars?

Jennifer Rubin and the rest of the screamers on this topic really ought to be made to explain how America is going to make a proper economic comeback without those schools reopening, and how when the evidence that COVID mortality is now in line with other past disease outbreaks for which we didn’t shut anything down they can justify locking things down for reasons other than to negatively affect Trump’s re-election.

It would be nice to see them make an effort, and it would also be a surprise. Nobody in the legacy media seems interested in an honest discussion of public policy anymore. They’re happy to engage in the same kind of stupidity Rubin did today.

Interested in more national news? We've got you covered! See More National News
Previous Article Happy With The Performance Of Politicians? Then Stay Home on July 11th!
Next Article Part Three Of Perdition Dropped Over The Weekend, And So Far Folks Seem To Like It