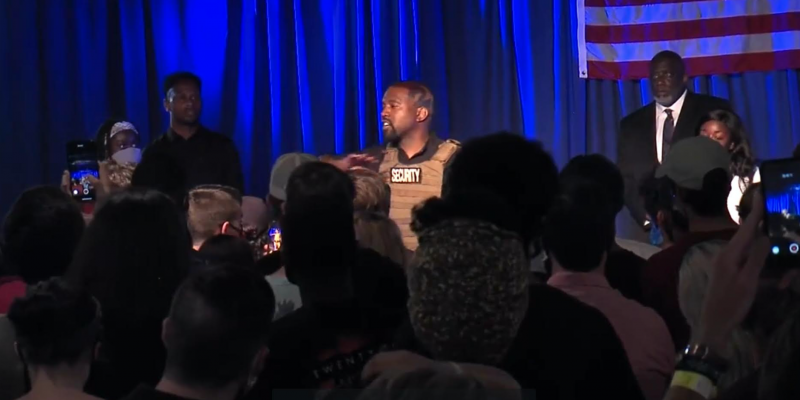 A teary-eyed Kanye West wore his heart on his sleeve in South Carolina on Sunday during his first campaign event since announcing himself as a candidate for president of the United States last week.

The first-time candidate issued a public call-to-action for voters to help him get on the ballot in The Palmetto State tweeting,

“If you’re a voter in South Carolina, please sign this petition to place me on the ballot   Sponsored by Ye  2020

While he covered a wide range of issues at the rally, the part that stood out the most was when he broke down in tears while confessing, “I almost aborted my daughter.”

West credited Kim with “saving North’s life” and became even more emotional as he revealed what happened “43 years ago” saying, “My mom saved my life. My dad wanted to abort me. There wouldn’t have been no Kanye West, ya’ll!”

The musical artist and fashion designer told the story of being in a hotel room and seeing his laptop screen turn “black and white” which he considered a sign from God saying, “God was saying ‘If you’re gonna mess with my vision, I’m gonna mess with yours.”

It was a powerful testimony which the mainstream media will surely cast in a negative light but the raw emotion West displayed on this major political issue is a ‘PR’ disaster for Democrats.

While West’s support among Democrats has surely waned due to his words of support for Donald Trump, there is likely a treasure-trove of young voters who have no allegiance to either political party. This is where Kanye could become a major problem for Democrats.

Furthermore, it is likely that West maintains some level of support in the black community through more than a decade of being one of the most popular rap and hip-hop artists.

The most recent head-to-head poll between Donald Trump and Joe Biden show Republicans with a four-point advantage over Democrats, 50% to 46%.

While the full impact of West’s candidacy remains to be seen, it is safe to say that the name “Kanye West” appearing on the November ballot in South Carolina will put the state’s nine electoral college votes further beyond Democrat’s reach.

Interested in more national news? We've got you covered! See More National News
Previous Article For every one new regulation created in Washington, D.C., seven have been rolled back
Next Article ALEXANDER: Reflections On The Cancel Culture