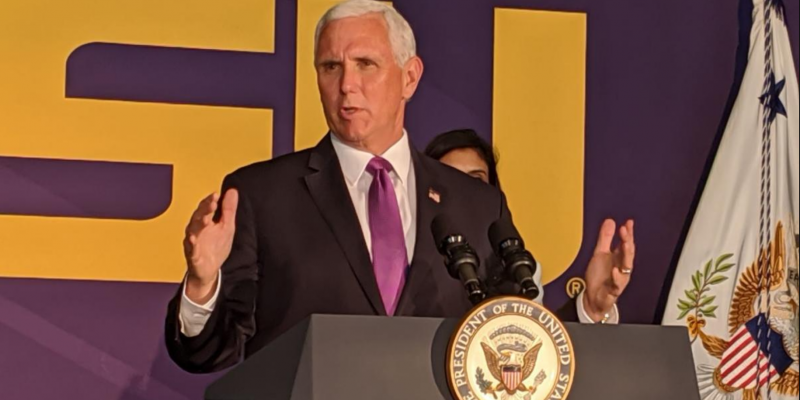 Louisiana is better positioned to safely hold in-person classes now than it was in March or April, Vice President Mike Pence said Tuesday in Baton Rouge.

Pence, who heads the White House’s coronavirus task force, said he agreed with Edwards’ decision to stay in phase two and supported the mask mandate, adding that such a mandate might not be necessary everywhere.

“We’re going to open up our schools, Lord willing, and we’re going to do that in about a month,” Gov. Edwards said.

Republican Senator John Kennedy says not reopening schools would cause more harm than the coronavirus to children. He also urged universities to “step up to the plate” and help expand testing in the state.

Pence said Louisiana is better positioned to deal with the coronavirus because it has more testing availability, personal protective equipment and medicine than it did a few months ago, and its health care professionals are experienced and more knowledgeable about the disease.

Louisiana is expected to have roughly 100,000 more ventilators in 100 days, Pence said. And the federal government has partnered with the private sector to produce masks and gowns. New treatments like remdesivir, have also shown promise in treating hospitalized COVID patients, he said. The the state’s supply of remdesivir, officials said, have been replenished by the federal government.

Interested in more national news? We've got you covered! See More National News
Previous Article CBO: Federal budget deficit in June was larger than the entire deficit in 2018
Next Article GIBERT: America As You Know It Won’t Exist If Biden Is Elected