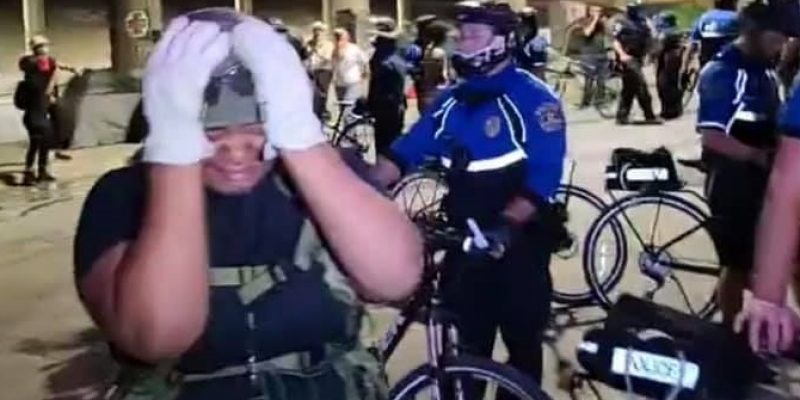 Traffic was re-routed around downtown briefly on Saturday evening as fears of violent protests circulated around Texas’s capital city.

A “March to Amplify Black Voices and Defund the Police” which ended at an Austin City Council member’s house was relatively peaceful. A second march, protesting the death of Garret Foster, became confrontational at times, as the Austin Police Department reported 35 arrests.

Meanwhile, on the west side of Austin, hundreds joined vehicle-based and roadside support for President Donald Trump.

No shootings or serious injuries were reported on Saturday.

From the hip: We’re now on the back end, where hindsight is 20/20 and Monday morning quarterbacking is easy to do. But on the front end, conservatives were abnormally fearful of violent protests — rumors ranged from hundreds of busloads of activists from Portland storming Austin to create a CHAZ/CHOP-like zone to protesters using grappling hooks to scale large buildings.

We only wish we were kidding. According to one of many alarmist messages distributed over the weekend:

The intelligence reports are meticulously linked to the source postings by Antifa and Black Lives Matter in their public and private Facebook groups and on other internet postings.

An individual who made a large purchase of hammers, hard hats, and megaphones at Harbor Freight Tools on July 29 in preparation for this event, and the subject “inquired if the hammers were strong enough to break car windows.”

The subject also asked about parking cones without a hole top to smother and contain police tear gas.

The internal documents also alarmingly explain how Antifa is planning to launch sniper attacks on police or anybody else who interferes with their downtown takeover.

“Info has been received that various members may be setting up overwatch/sniper positions in downtown area,” the document states, adding that Antifa is planning to deploy “Five subjects/snipers at each location, with climbing gear (grappling hooks, ropes etc) needed to reach rooftops if necessary.”

Additionally, a memo corroborating this intel was issued by East Austin housing provider Guadalupe Neighborhood Development Corporation on Friday, warning tenants about Antifa being bussed in from other cities and posting snipers on nearby rooftops.

You read that right: tough-talking Texans were fearful of urban hipster protesters riding Branson-style tour buses to invade Austin with hammers from Harbor Freight. (Oh, and grappling hooks — wherever you buy those.)

None of that came to pass. Ironically, the only noticeably armed persons were typically right-wing/Libertarian open carry activists wishing to protect the First Amendment rights of the protesters.

But in all fairness, a good reason none of the demonstrations over the weekend turned anywhere near violent was the Austin Police Department, the Texas Department of Public Safety, Travis County Sheriff’s Office, and University of Texas Police who deployed what many are hailing as a textbook example of how to handle a violent protest. Of the many scenes from Saturday night, one that is getting particular notice is a mounted Austin PD patrol which broke up a group of protesters who were blocking a public street. Take a watch: It’s strangely cathartic.

Despite the actual dangers present, compared the hype spread over the weekend these protests were paper tigers. At the end of the day, the only busloads were those of state troopers who posted guards throughout downtown.

That’s not to say there wasn’t an element of expertise to this weekend’s demonstrations on the side of the protesters. Progressive activists appear to have used several old tricks leading up to the protests including filing crime tips with local police with the ever-familiar clearing-out-the-store-shelves-of-hammers-and-crowbars rumor.

After last weekend’s shooting, those worried about an increase in violence were right to be concerned for personal safety. Giving the police a wide berth to respond to protesters was the correct thing to do.

Sounding the alarm, however, is the by-product of a victim mentality that does not lend credibility to the conservative cause, especially since conservatives are the ones more likely to shoot back. The overreaction only makes the protesters seem larger and more capable of violence.

_______________
Photo info: Distributed via Facebook. Source unknown. This appears to be a protester upset by police blockading an area of downtown Austin.