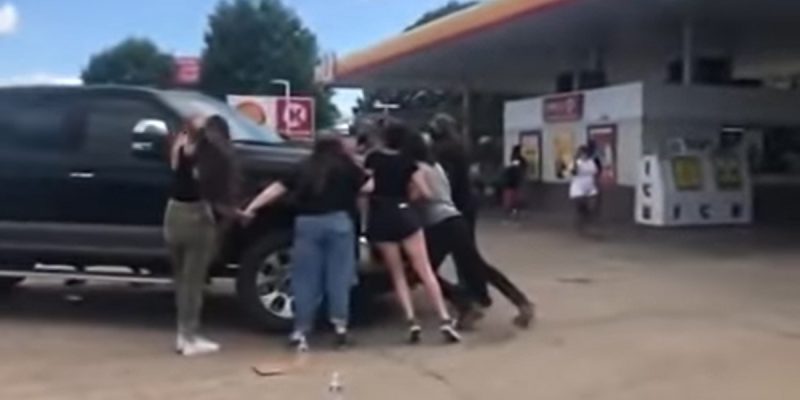 This is so bad it’s funny, and it’s from Lafayette yesterday. In the video you’ll see a bunch of Antifa/Black Lives Matter “mostly peaceful” protesters trying to stop an F-250 truck at a gas station.

Obviously, it doesn’t work. The driver patiently pushes right through them.

But what’s even more amazing than the idiot protesters thinking they can lean really hard into the truck and make it stop – there’s even a moron behind the truck holding onto the bumper and trying to pull it back – is that the driver, once he’s managed to push through the line of protesters, just pulls up to the gas pump and hops out to fill up his tank.

And for his trouble he’s called a racist, which is peculiar since it’s mostly white people he’s pushing past, and a “domestic terrorist” by the BLM clowns who pop off toward the end of the video.

Amplifying the stupidity on this video is the underlying event the protesters are angry about.

Trayford Pellerin, a career criminal whose record included arrests for drug possession with the intent to distribute both marijuana and cocaine, resisting arrest, assault and battery, possession of a firearm by a felon and damage to property, was involved in a disturbance of some sort at a gas station on Evangeline Thruway – not the one the protesters in the video were attempting to block entry to. Police were called; Pellerin was armed with a knife.

Instead of complying with police demands, Pellerin and his knife proceeded to walk a half-mile down Evangeline Thruway to another gas station, the one in the video. The police, patient beyond reason, walked with him. Pellerin was tased twice, but that had no effect on him.

He wasn’t shot until he and his knife attempted to enter the small convenience store at that gas station. There were women and children inside the store at the time. That’s when Pellerin was shot 11 times, which killed him.

There is one person responsible for what happened to Trayford Pellerin, and that’s Trayford Pellerin. Nevertheless, the black community in Lafayette wants an Alton Sterling so their activists can be relevant, and they also don’t like the fact that Josh Guillory, the mayor of Lafayette, is a white Republican. So they’ve latched on to Trayford Pellerin as the new Michael Brown or George Floyd, recruited a bunch of crunchy white leftists to stand in the streets screaming “No Justice, No Peace!” and castigated Guillory as a “white racist” for the sin of having correctly characterized the police actions as justified and correct.

And Guillory has of course now apologized, which is the most idiotic thing of all. What he thinks that apology is going to buy him, we have no idea. The local race hustlers are demanding his resignation and now that he’s apologized those demands will only get louder.

Everything about this – from beginning to end, not that this is the end, is stupid. The entire thing is asinine. This week it’s up to Guillory to sort it out and restore order to Lafayette. If he doesn’t, the lesson will be that American politicians, Republican and Democrat alike, are incapable of delivering law and order to our cities.