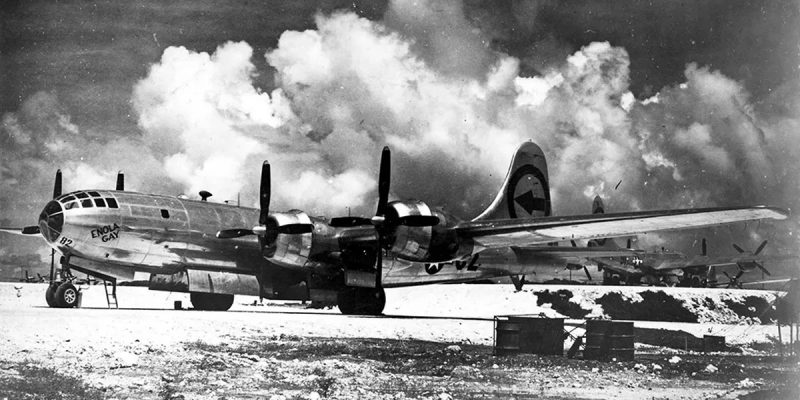 …seeing as though the week of August 7-14 is the anniversary of those eight days in 1945 when World War II finally ended and the nuclear age began, we thought we’d mark the occasion with a few comments and one of our favorite videos.

We’ll start with the video, which is appropriate to the anniversary. It’s one of the Bill Whittle Afterburner series, and it comes from back in 2016 as a response to something the comedian John Stewart said, which is that the Hiroshima bombing was a “war crime.” Here is Whittle’s devastating rebuttal, which contains one of the most succinct and powerful retellings of the strategic history of the end of the war in the pacific…

As Whittle says, it took a good long while for the Japanese to surrender.

This coming Friday, August 14, will be the 75th anniversary of the Japanese surrender to end the war.

Those dates make it quite clear simply notifying Japan that America had nuclear weapons was not likely to end the war. A test-bombing of some uninhabited place as a demonstration of the power of the weapon wasn’t going to do it, as impractical and unreasonably generous as Whittle remarks it to be.

Because as Whittle notes, Hiroshima wasn’t enough to end the war. Japan kept fighting. They kept fighting after Nagasaki, to. In fact, for five days after Nagasaki they still hadn’t surrendered, and had the military commanders succeeded in kidnapping the emperor we would very likely have had to go through with Operation Downfall. The number of Japanese lives that would have been lost in that invasion of the Japanese mainland islands would certainly have dwarfed the human cost of Hiroshima and Nagasaki.

As Whittle notes, the Japanese civilian populace was being prepared to serve as a force of kamikaze warriors armed with bamboo spears and explosive backpacks, to fight house to house against the American invaders. The only military sound tactic to deal with such a crazed opposition would have been nonstop bombing and shelling of populated areas – indiscriminate nonstop bombing and shelling, at that. We would have had to carpet-bomb Japan until not a wall nor door was left standing in Japanese cities, and the fighting of Iwo Jima and Okinawa would have paled in comparison to the utter hell Kyushu and Honshu would have been.

Hundreds of thousands of American soldiers and Marines would have died, and those who survived would live out their days with memories of pure, unadulterated hell torturing them. The ruin of so many men would have been the real war crime.

And that isn’t even to discuss the slaughter such an invasion would have inflicted on the Japanese. If the emperor and his military clique really did want to throw 32 million Japanese into an all-out fight to repel the Americans, certainly millions of them – perhaps tens of millions – would have perished. Japan would have been turned into a land of the dead, and it certainly wouldn’t have risen to its current heights.

Critics of the bombing point out that doing so was Truman’s way of “showing” the Soviets American power.

Well, maybe there is truth in that. But what’s also fair to realize was that the USSR was a lot bigger player than just somebody to be “shown.” The Soviets were going to join the invasion of Japan, and Japan would have been partitioned at the end of the war.

And while Germany calcified into East and West, separated by concrete and barbed wire until the end of the 1980’s, Korea and Vietnam were a little different.

Less than eight years after the end of World War II, North Korea’s Soviet- and Chinese-backed dictator Kim Il Sung launched an all-out attack on South Korea and virtually destroyed that country. America was sucked into that war and some 37,000 of our men lost their lives in some of the most vicious fighting this country has ever experienced. A little more than a decade after that, North Vietnam’s communist dictator Ho Chi Minh, equipped with Soviet-made weapons, launched first a proxy war against South Vietnam and then a wholesale military action aimed at conquest. America was sucked into that war as well, and 55,000 of our men lost their lives in even worse fighting than Korea. In the case of Vietnam our country’s spirit was broken and the post-Watergate Democrats abandoned what had been an unstable peace by reneging on aid commitments we made to the South Vietnamese government. Millions of Vietnamese were thus consigned to misery under a communist government which still rules today.

Can anyone say that Japan’s fate as a partitioned country would have been as “successful” as that of Germany’s? Germans, particularly those in East Germany, will tell you not just of the misery of the Cold War but of the enormous cost of absorbing a dysfunctional East German slave state into West Germany. They managed it, of course, but not easily.

And Germany was the best case.

A partitioned Japan could have looked like Korea. North and South Japan would inevitably have gone to war, and that fight would inevitably have been a proxy war between America and either the USSR or China, or both. That we had overwhelming naval superiority would have meant we would have won – Japan is an archipelago, after all – but at what cost? And because of the threat of a nuclear World War III which loomed throughout the Cold War, we would not have invaded North Japan seeking to reunite the country, so the odds are quite good North Japan would still exist today.

History would have turned out very differently, and certainly not better than it did. Millions and millions of people live better lives today because Harry Truman had the sand to make a difficult, unpleasant and ultimately very wise decision to use nukes on Japan.

This week is the 75th anniversary of that momentous few days when the Japanese struggled to grasp the effects of Hiroshima and Nagasaki. It’s a time for us to celebrate both Truman’s correct call and the Japanese correct response. Both saved lives.

And the Jon Stewarts and other anti-Americans should be ashamed of themselves for judging the people who did what they needed to end the war.

Interested in more national news? We've got you covered! See More National News
Previous Article CROUERE: COVID-19 Is No Reason To Empty The Prisons
Next Article What Happens If The NCAA Destroys Itself This Week?