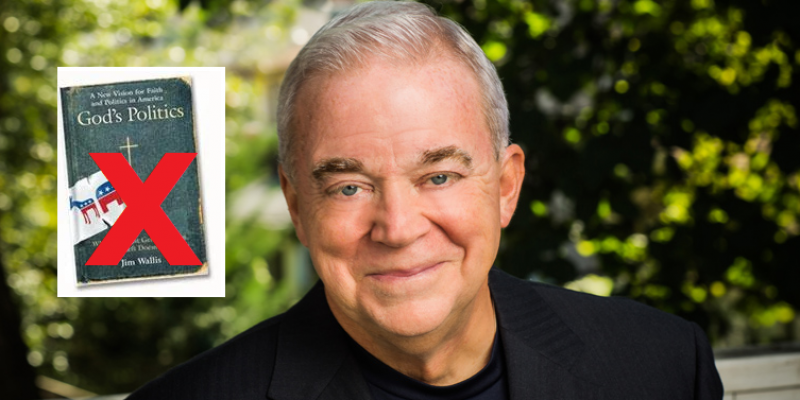 As the Democratic National Convention this week was throwing in a smattering of faith messages in order to woo religious voters, one of the more prominent writers of the Religious Left stepped aside.

The party that once booed God and this year hosted several caucus meetings that left “Under God” out of the Pledge of Allegiance, also rolled out John Legend for a performance of his 2014 hit “Glory” (which conveys Christian aesthetics but mostly memorializes the Civil Rights Movement of the 1960s). A video from earlier this year of now-presidential nominee Joe Biden was shown during the mostly online convention of him sharing about his faith, while pausing to remind the audience he has no intention of “proselytizing” those listening.

That’s not to say there are not Democrats who will attempt to convert others to the fold of Christ, or engage in actual worship of an actual God. One of them is Jim Wallis, a self-described member of the Evangelical Left and the dismissed editor mentioned above, who has edited “Sojourners” since he helped to found the magazine in 1971.

Wallis came to national prominence in the mid-2000s when the DNC adopted a “new American mainstream” tactic to win over voters who traditionally cast ballots for Republicans — particularly Southerners and Americans who believe in the Bible. Enter “God’s Politics,” Wallis’s tour de force that threw plenty of shade on the conservative Religious Right at a point in time when the George W. Bush Administration had basement-level approval ratings and many Christians were questioning U.S. involvement in Middle Eastern conflicts.

The subtitle of Wallis’s book “Why the Right Gets It Wrong and the Left Doesn’t Get It” was a clarion call for Democrats to embrace left-leaning Evangelicals (in particular) and for right-leaning Evangelicals to dump the GOP in favor of social justice and economic redistribution. Now, after two decades of “Bush Fatigue,” guilt over not liking Barack Obama more, and now “Trump Derangement Syndrome” an increasing number of typically conservative Evangelical Protestants and Catholics are flirting with the Left (even if the trend is over-exaggerated). And Wallis was leading that shift successfully.

Until Aug. 14, anyway, when Wallis published an article now titled “The Catholic Church has a visible white-power faction.” According to the conservative Institute for Religion and Democracy (IRD), here’s it all went to blazes:

Now Wallis has stepped down as Sojourners editor after he tried to delete an article accusing Roman Catholicism of rampant racism. His attempt prompted two other editors publicly to resign. […]

Wallis, who identifies as Evangelical Left [we would argue he and the new editor are actually Pietists, not Evangelicals per se], has often sought alliance with liberal Catholics, such as with his “Call to Renewal” coalition founded in the 1990s. In more recent years his “Circle of Protection” has included the U.S. Conference of Catholic Bishops to lobby for federal funding to social welfare programs and for more permissive immigration policy.

Sojourners[‘s] “White Power” article originally alleged that a 2018 U.S. Catholic bishops anti-racism statement declined to condemn swastikas, Confederate flags, and nooses. Wallis, noting the bishops had cited swastikas and nooses, removed the article as inaccurate. He explained it was “offensive” and included “unwarranted insinuations and allegations against many Catholics, many in leadership, including the bishops, and within the wider Catholic Church who are working toward and are committed to racial justice.”

Wallis, according to IRD, released a series of apologies, defending the scholarship of the article while saying it was too inflammatory in attempting to tie conservative Catholics to the Alt-Right. He asked for forgiveness. IRD continued:

Wallis sensibly had recognized the article as incoherent and conspiratorial without evidently realizing that postmodern intersectionality disdains linear reason in favor of drawing ideological lines connecting all sinister oppressions.

I officially resigned from my associate editor position @Sojourners late last week. I secured another position elsewhere but let me be clear — three years of experiencing this toxic environment as a Dalit woman/WOC + recent events is the reason why I decided to leave. https://t.co/OL4YaVHBbe

From a writer no longer contributing, the apology did not go far enough:

I’ve written for @Sojourners but I’ve since resolved to not write for them. There are too many restrictions on content – on LGBTQ, abortion, race – due to fear from the top about being “divisive.”

The publication announced a new “editorial independence policy.” From a press release: “Sojourners commits that we will never again remove a published article from our website, and resolve any conflicts with our advocacy mission in other ways. Any errors or concerns found post-publication will be handled according to the proper editorial processes of issuing correction(s) and/or offering any needed editor’s note, engaging our audience in thoughtful public debate or offering space for rebuttal.”

From the hip: As IRD noted and we will readily mention, the Religious Left is in a precarious position: Maintaining what remains of Biblical values in the major denominations of Christianity while promoting a liberal social platform.

Now that wokeness and “intersectionality” has asserted itself with religious-like fervor — having established its own list of sins that must be eradicated at all costs — Wallis’s pandering is no longer acceptable. He is moderate on abortion and does not favor divesting from companies that do business with the state of Israel, for starters.

Wallis, 72, (maybe it’s time to retire, and this made for a convenient reason) represents and older stream of liberalism. Having previously been a member of the socialist Students for a Democratic Society in the 1960s, Wallis’s liberalism is one of moral relativism, non-interventionism (Wallis is a pacifist), and the expansion of the welfare state.

Today’s progressives have ditched relativism for their own set of moral absolutes — anti-racism, #metoo feminism, and “climate justice” among them, and even seem to favor war with Russia at times. Deviance from these “woke” values is intolerable, but complacency has now become a sin of omission (e.g. the movement’s shift from racial justice to “anti-racism” — simply being morally opposed to discrimination is no longer enough, and action is demanded).

Comparing the current state of the American left to an emerging new religion is nothing new. Wallis’s departure as editor after nearly half a century, however, may be the final nail in that cross.