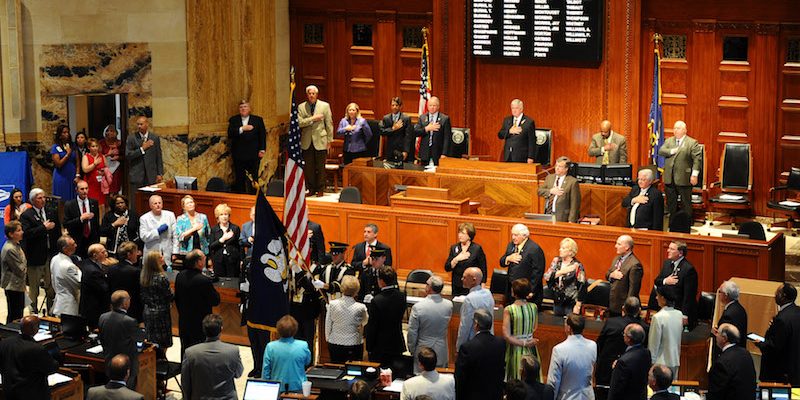 …in the 4 Acres Lounge v. Edwards case which was filed in a New Orleans federal court. The brief is an interesting add-on to Attorney General Jeff Landry’s legal opinion stating that Gov. John Bel Edwards’ mask mandate and bar closure was unconstitutional, in that it’s written on behalf of the Louisiana Legislature and makes the argument that the mandate is null and void because it misappropriates powers which are rightfully the Legislature’s.

In pertinent part, it reads…

LSA-CONST. ART. 2, Section 2. Limitations on Each Branch.
Section 2. Except as otherwise provided by this constitution, no one of these branches, nor any person holding office in one of them, shall exercise power belonging to either of the others.

The exercise attempted by the Governor in this case is purportedly based on the Louisiana Homeland Security and Emergency Assistance and Disaster Act, La. R.S. 29:721, et seq. While this delegation of the legislative power to the executive may under some  circumstances be permissible, it is severely limited. In State v. Miller, 857 So.2d 423 (La. 2003), the Court held that the actions taken by a sheriff in declaring certain items contraband and therefore impermissible in a parish prison were unconstitutional because the statute prohibiting the introduction of contraband did not expressly grant to the warden of the facility the power to determine what falls within the definition of contraband.

Here, the statute enumerates certain steps the Governor may take in the event of an emergency, but, insofar as penalties for violation of the order under the statute, provides that “in the event of an emergency declared by the governor pursuant to this chapter, any person…violating any order…pursuant to this chapter, shall be fined not more than $500 or confined in the parish jail for not more than six (6) months, or both. No executive order, proclamation, or regulation shall create or define a crime or fixed penalties.” LSA-R.S.29:724 E (emphasis supplied). Further, legislature has specifically said that no order of the governor may create a crime or fix a penalty, this being a legislative function. Because this order does just
that, creates a crime (albeit an amorphous one) and creates a penalty (it cannot be said that any penalty is “fixed” because the order is so vague) in the mask mandate and in the threat of closure, the order is ultra vires and violates the state constitutional provisions cited above. (See also Krielow v. La. Dept. of Agriculture, Nos. 2013–CA–1106, 2013–CA–1448 , 125 So.3d 384 (La. 10/15/13).)

Indeed, the law of Louisiana is that the Governor as the chief executive officer of the state has a duty to see that all the laws of the state and the United States are faithfully executed, but not to expand those laws, which is solely the province of the legislature (see Louisiana Department of Justice v. Edwards, No. 2017-CA-0173, La. App. First Circuit, 2017).

The legislature, being mindful of the limitations on the powers of the Governor and the separation of powers mandated by the constitution, in fact provided:

D. Nothing in this Chapter shall be interpreted to diminish the rights guaranteed to all persons under the Declaration of Rights of the Louisiana Constitution or the Bill of Rights of the United States Constitution. This Chapter shall not violate Article II (Distribution of Powers), Article III (Legislative Branch), or Article V (Judicial Branch) of the Louisiana Constitution. The courts shall be open, and every person shall have an adequate remedy by due process of law and justice, administered without denial, partiality, or unreasonable delay, for injury to him in his person, property, reputation, or other rights. The orders of all courts shall have their full force and effect. The legislature may call itself into session at any time and shall exercise its powers and duties. Its ability to enact law, appropriate funds, and confirm appointees shall be in full force. The privileges and immunities of legislators shall be respected.
LSA-R.S. 29:736.

Nothing the Governor can do by Emergency Order can “diminish the rights guaranteed to all persons under the Declaration of Rights of the Louisiana Constitution or the Bill of Rights of the United States Constitution”, yet that is precisely what this Order does, in enacting penalties which are unspecified, requiring business owners to enforce vague and poorly defined (when defined at all) prohibitions, taking property in the form of lost business and reputation in the shutdown of some business over violations of the order, or, in the case of bars, shutting them down outright, and denial of rights without due process of law. (This last argument, articulated at some length in the Attorney General’s opinion cited above, is particularly important in that it most directly implicates rights guaranteed under both the federal and state constitution.)

We don’t have a list of legislators who have signed on to this yet. It literally just hit last night and it’s expected to be filed today.

But there really is zero reason why every single legislator, or at the very least every single Republican legislator, shouldn’t sign on to this thing. Refusing to do so is a really, really lousy look if they’re going to advertise that they’re fighting for their people and particularly the business community in their districts.

Somewhere more than 40 members of the House of Representatives signed Rep. Alan Seabaugh’s petition to liquidate Edwards’ emergency declaration, but the petition never got to the required 53 votes in the House mostly because the Speaker, Clay Schexnayder, came out against the petition and dictated to the 20-something other House Republicans that they not do so. Schexnayder told the legislators Louisiana would lose federal COVID dollars if the petition went into effect.

That was enough to scare the remainder off, and the petition is more or less dead – though perhaps at some point it might revive if things become absurd enough. That’s certainly a possibility given that Edwards has spent Louisiana into what could well be oblivion once the state’s unemployment insurance fund runs out of money.

We’ve said this before, but Schexnayder’s stance on the petition was one of the stupidest things we’ve seen a politician do. What he should have done was pushed it over the top and taken possession of it, walked it up to the Fourth Floor and told the governor he now had a seat at the table for every single decision that would be made about COVID-19, or else he’d file the petition and take all of Edwards’ toys away. We don’t know whether it was a lack of stones, or of vision, which led Schexnayder to spit out the best piece of leverage any Louisiana legislator ever had, but that’s where we are.

But this amicus brief carries none of the purported dire consequences of the petition. It doesn’t have the force of law, though it could very well influence federal judge Martin Feldman, who is one of the better judges the Eastern District of Louisiana has to offer, to find for the bar owners suing Edwards to kill off that mask mandate/bar closure edict.

If the legislators won’t stand up for themselves and their own constitutional powers, then it’s a pretty good signal that they won’t stand up for their constituents who are drowning in red ink thanks to the damage Edwards has done to the state’s economy. Rumblings about economic damage in Louisiana are getting louder by the day, as business after business makes the decision to close up shop permanently, and Edwards refuses to even address the situation. He doesn’t care, because he sees the business community – and particularly small business – as a political enemy. But those legislators are a different story.

This doesn’t take a great deal of sand. It’s a no-brainer. Even if you think the mask mandate and bar closure is a good idea, it’s still something local governments can impose. Or, the legislature can call itself into session and pass a mandate of its own. But seeing as though the state’s highest legal officer has called Edwards’ edict unconstitutional, with damned good reason to do so, and seeing as though Landry’s opinion touched on the fact Edwards usurped the legislature’s power with that edict, anybody refusing to sign this thing can pretty much be written off as gutless and a lackey of the governor’s regardless of what letter he puts by his name.