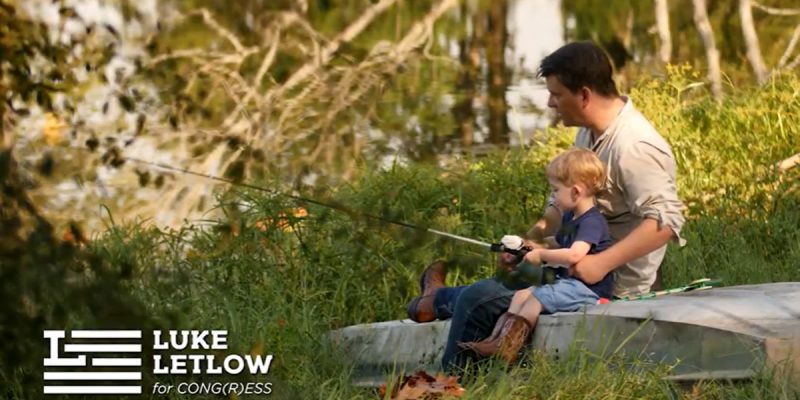 We still haven’t seen any polling on the 5th District Congressional race, which is a nine-way battle for two runoff spots to be decided on Nov. 3.

But if we had to guess, just based on the performance of the various fundraising operations, if there’s a frontrunner in the race it’s Luke Letlow, the former chief of staff to incumbent 5th District Congressman Ralph Abraham. Letlow, who pulled Abraham’s endorsement and has greatly outraised the rest of the field, seems to have a little bit of momentum and so far he’s the one running more TV ads than anybody else.

Letlow even has a new spot out, which is a biographical ad focusing on his family…

“My priority is Louisiana’s recovery and economic success moving forward. We have a long road of recovery ahead and we need someone who understands what it takes to make sure Washington is working for Louisiana to help our communities and businesses to get back on their feet. I’m focused on creating jobs and opportunity for all Louisianians, and I’ll always do the right thing for Louisiana families,” said Luke Letlow.

It’s the kind of ad you run when your internal polls show you’re ahead. Doesn’t talk about policy, so it won’t offend anybody, and just makes folks feel comfortable having you as their congressman.

The most likely of the Republican opponents to either join Letlow in the runoff or even displace him would be state representative Lance Harris of Alexandria, and today Harris is going to find himself stuck in a legislative special session for 30 days which will make campaigning awfully close to impossible, so he’s going to try to get as much exposure out of the special session as he can. One way he’s going about that is to bring some controversial bills which will keep his name in the papers. Like this one…

I will be authoring the nation's first Police Funding Protection Act in the 2020 Louisiana special session. If a…

The bill is a decent idea, but the problem is that the issue most of Louisiana’s Republican voters are most concerned with isn’t the idea of defunding the police (that could be an issue in New Orleans or Baton Rouge, but neither are in the 5th District), it’s the catastrophic condition of the state’s economy. If the legislative session is going to be a playing field for Harris’ campaign, then what he’s going to get asked about more than anything is whether his name is on any of the House petitions circulating to reopen the state’s economy and dump Gov. John Bel Edwards’ emergency declaration and COVID-19 restrictions. So far as we know Harris hasn’t signed any, which means he’s going to have to come up with something else beyond punishing Democrat-run cities who want to defund their police departments.

And then there’s Scotty Robertson, the Ouachita Parish Police Juror, who a couple of weeks ago put this message out essentially accusing Letlow of trying to buy him out of the race…

I have a proven record of public service, and I have always promised and delivered transparency.  #DrainTheSwamp #NotForSale #RunOutCorruption

Posted by Scotty Robinson for Congress on Tuesday, September 8, 2020

Nowhere in that Rob Maness-esque “I can’t be bought” video does Robertson attribute this alleged offer to Letlow; it’s “supporters.”

But a couple of things might be said here, because we aren’t fans of this “they offered to pay me to get out of the race” protestation.

First of all, if you’re running for something that makes you a politician. Understand this: if you’re a politician, nobody cares about your problems. Really. Politics is a dirty, nasty racket and at the high end of it is the ability to hold power over your fellow man. Anybody who’s actually outraged over shenanigans that politicians do to each other that have zero effect on policy or anything that affects the rest of our lives needs his head examined.

Second, when a politician does one of these statements defiantly calling out somebody else’s camp for trying to induce him to get out of a race, it means one thing and one thing only – he’s losing, badly, he’s out of money and he probably ought to take whatever is offered and get out of the race.

Whining about those offers isn’t great form. It doesn’t make you Jimmy Stewart; it makes you Don Quixote.

That isn’t a particular slam on Robertson. By what we hear he might well have a future in politics. But this isn’t one of his finer moments.

Is he lying about these offers? We wouldn’t imagine he is. But here’s the thing – trying to get people out of a race and/or securing their endorsement is what politicians do all the time. You could make the case it isn’t ethical, but whatever. It’s the way of the world.

Robertson isn’t going to make the runoff; this isn’t his time. Has he made enough of a name for himself that he can parlay that exposure into another race? We’ll see.

Of the Democrats running, so far the one who seems to have the most juice to him is Martin Lemelle, an administrator at Grambling State University. He’s got a web ad running which, peculiarly enough, is hitting lots of people outside of the 5th District – which means either it’s a failure of geotargeting by his campaign team or it’s evidence that he’s in the race more to make a name for himself for the future.

The district will certainly stay red once the runoff is over, but it seems a decent bet Lemelle could capture enough Democrat vote to get into a runoff, more likely than not with Letlow. The only other Democrat in the race who seems to have made much of a move is Candy Christophe, but at the end of her 2nd quarter campaign finance period she was already $10,000 in the hole.