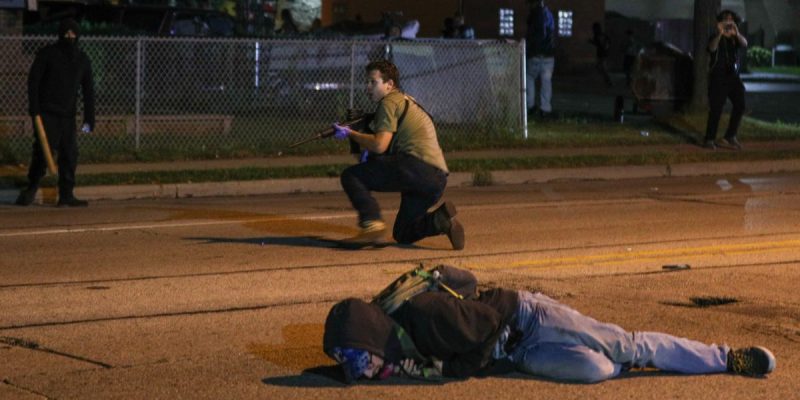 As we know, 17-year-old Kyle Rittenhouse attended the riots in Kenosha, Wisconsin and fatally shot two people and wounded a third.  He drove the 15 minutes from his home in Illinois to Kenosha to help defend the business of someone who had called him for help, amid widespread protests and arson after a white Kenosha police officer shot a black man on Aug. 23rd.

During the incident, Rittenhouse, who brought a First Aid kit with him, was pursued by the crowd and ran away from rioters, he was punched, fell to the ground and was then confronted by one man who tried to grab his AR 15 rifle, whom he shot.  He killed a second person, who hit him in the head with a skateboard and tried to take his gun.  He then fired on a third person who was carrying a weapon, hitting that person in the arm.  There is strong evidence he acted in self-defense.

These facts are obviously going to be disputed and all of this will be worked out in court.  However, Facebook has decided to ban, in a blanket fashion, any expression by its over 500 million users in “praise and support” of Rittenhouse, including any links to contribute to his legal defense.  Most disappointing is that Facebook CEO, Mark Zuckerberg, has previously stated the platform would protect free expression and not suppress speech.

This is yet another example of an overwhelming media presence, albeit a “private” one, suppressing speech.  Let me say that the 1st Amendment serves as a restraint on Congress, on government, not on private entities.  And, Facebook is, at least nominally, a private corporation.  However, its presence in American society (and the world) is so ubiquitous, widespread, and prevalent as to bear all the trappings of a government entity.  It largely functions as an arm of the government, a “state actor” in legal parlance.

[Note, because of its quasi-public presence in the everyday life of hundreds of millions across the globe, I think it likely that if Facebook continues to arbitrarily advance certain speech and censor other similar speech it will draw the attention of the Department of Justice and invite probes into unfair business practices, anti-competitive behavior, and monopolization].

By suppressing all speech in praise and support of Rittenhouse, Facebook has already essentially decided—judge, jury, and executioner—that Rittenhouse is a “mass murderer.”  This, notwithstanding the fact that, again, there are several strong indications that Rittenhouse acted in self-defense, all of which will be resolved in court.   However, before the first piece of evidence is introduced, before the first witness testifies, and long before a jury verdict is handed down Facebook has essentially deemed him guilty.

This censorship by the social media giant on an issue of pressing national importance is wrong, unfair, offensive and flouts the very principles of free speech that have allowed Facebook itself to thrive!   Speech condemning Rittenhouse is allowed but not speech defending and supporting him.  Further, Facebook has not only limited speech in support and praise of Rittenhouse in the forum of public opinion, it has also undermined his due process rights by limiting financial contributions to his legal defense team.

Facebook pretends that it is a neutral arbiter operating an information exchange platform.  In fact, Mark Zuckerberg recently said that “I just believe strongly that Facebook shouldn’t be the arbiter of truth of everything that people say online….Private companies probably shouldn’t be, especially these platform companies, shouldn’t be in the position of doing that.”

However, Facebook functions as a media company by making regular editorial decisions in the composition of its news feed.  In so doing, it must make those decisions objectively and in fairness to all points of view, even those with which it may disagree.

Facebook regularly claims, in often soaring and flowery terms, to be committed to civil rights and civil liberties.  However, it does the opposite here.

Interested in more national news? We've got you covered! See More National News
Previous Article AUDIO: I Did Radio In Chicago Friday On The Subject Of “Woke” Pro Sports
Next Article CROUERE: Trump Actually Deserves Better Than A Nobel Prize, You Know