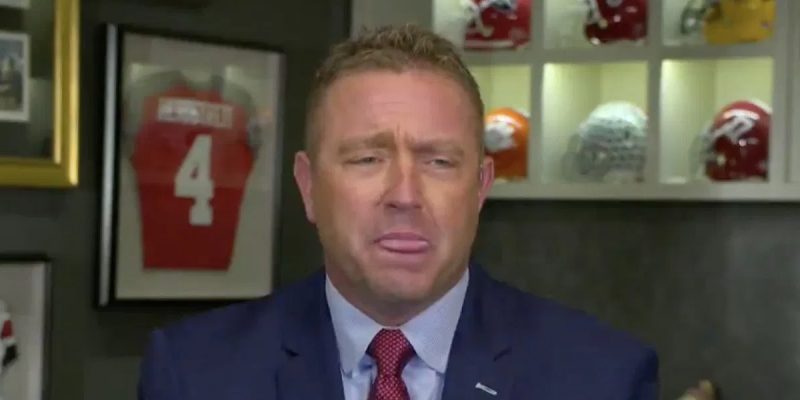 As many of our readers know I’m a frequent guest on the Dan Proft Show, which appears on WIND 560 AM in Chicago, talking about various subjects usually emanating from what appears in my American Spectator columns.

On Friday, that involved a column I wrote entitled “America’s Struggle Session Comes to College Football,” which dealt with that hideous spectacle on the initial episode of ESPN’s College Football Gameday in which Kirk Herbstreit, the network’s premier college football analyst, broke down crying on TV as he spouted Black Lives Matter inanities about hoodies and Nike gear.

Herbstreit’s disgraceful performance brought to a head something which has been metastasizing for several months, namely, as I said in the column, “The social-justice Left, which ruins everything it touches, has its hands on pro and college sports like Joe Biden on a 12-year-old.”

On Friday, Dan’s guest host was John Hinderaker, the prime purveyor of the excellent PowerLine Blog which I’m a daily reader of (and so should you be), and we kicked this around. A little more commentary to follow the audio…

This “woke” business is a total disaster for everybody concerned. Just look at the mess Disney is in; they attempted to make a live-action version of Mulan, their cartoon-character flick set in China which involves a “woke” heroine capable of beating the hell out of countless men twice her size, and lo and behold much of it was shot in Xinjiang Province, the place where the Chinese have put Uighurs in concentration camps (the “woke” NBA got outed, hilariously enough, by Disney-owned ESPN, for participating in basketball-related torture camps for Uighurs; nobody escapes in corporate media).

Something fun to watch for that we didn’t have time to cover in the radio appearance: in a couple of weeks the NBA season will end, and there will be a month or so before it cranks back up. In that interval you’re going to have a free agency period, and the verdict on this “woke” business will start to come in.

With TV ratings down 40 percent or more and COVID-19 wiping out home games for the teams (and thus ticket sales), the owners are pretty unlikely to pay the kind of free agent contracts they’ve been paying. Sure, they’ll have salary cap money available, but red ink, and not the salary caps, will start to be the deciding factor.

And when those NBA players looking for their second contracts, the ones where they hit the $10-12 million a year mark and really make the kind of money which sets them up for life and pay for an extravagant lifestyle for kids they’ve spread around with multiple women, etc., start getting contract offers at $3 million or $4 million, the bet is the Black Lives Matter stuff will melt away in a heartbeat.

And what’s more, those ham-and-egg, run-of-the-mill NBA players are pretty likely to revolt against the LeBron Jameses of the world whose activism has driven the NBA to potential ruin. James doesn’t give a damn; he’ll make astronomical money no matter what swill emanates from his mouth. But when these guys start realizing what he’s cost them by driving this “woke” crap which is driving the fans away, and that their personal financial futures are going to take a hit from it, there will be a spectacle of retribution to see.

Maybe not. But there is going to be a price to be paid for alienating so much of the fan base. It’s inevitable. The Left never should have been allowed to get its claws into pro and college sports, because they’re tainted and corrupted now. Hunting, fishing and book-reading will get a boost; they certainly have in my house.