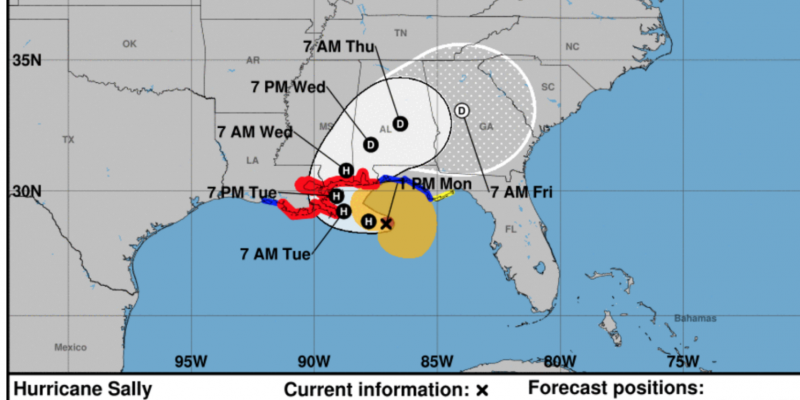 Hurricane Sally is expected to make landfall late Tuesday or Wednesday as a Category 2 storm, forecasters are predicting.

The hurricane is expected to cause many life-threatening hazards, the National Hurricane Center reported Tuesday morning. The agency is urging residents in the direction of the story to check the latest NHC advisories at http://hurricanes.gov and local weather forecasts at http://weather.gov.

Here are the Key Messages for #Sally on Tuesday morning. The hurricane is expected to cause many life-threatening hazards, as detailed below. The latest NHC advisory is at https://t.co/tW4KeFW0gB and your local weather forecast is https://t.co/SiZo8ohZMN pic.twitter.com/Fi558tk15O

By late Monday afternoon, Sally had sustained winds of roughly 100 miles per hour. Eight to 16 inches of rain are predicted, with as much as 24 inches possible in isolated areas because the storm is moving slowly, which causes more flooding.

Sally’s rainfall could result in seven to 11 feet of storm surge from the mouth of the Mississippi River to Ocean Springs, Miss.; as much as five feet in Lake Pontchartrain and Lake Maurepas, and as much as four feet at Port Fourchon, forecasters said.

The White House on Monday granted Louisiana’s request for a pre-landfall disaster declaration for 30 parishes, which allows for direct federal financial assistance.

Already, 13,000 evacuees are being sheltered in Louisiana, primarily in New Orleans hotels. More than 5,000 Louisiana residents are sheltering in Texas.

In Florida, Governor DeSantis signed an Executive Order declaring a state of emergency for Santa Rosa and Escambia Counties.

Escambia County issued a voluntary evacuation order for low-lying areas of the county, including Perdido Key and Pensacola Beach.

Schools in Okaloosa, Walton, and Santa Rosa counties are closed on Tuesday. Schools in Escambia County are closed Tuesday and Wednesday.