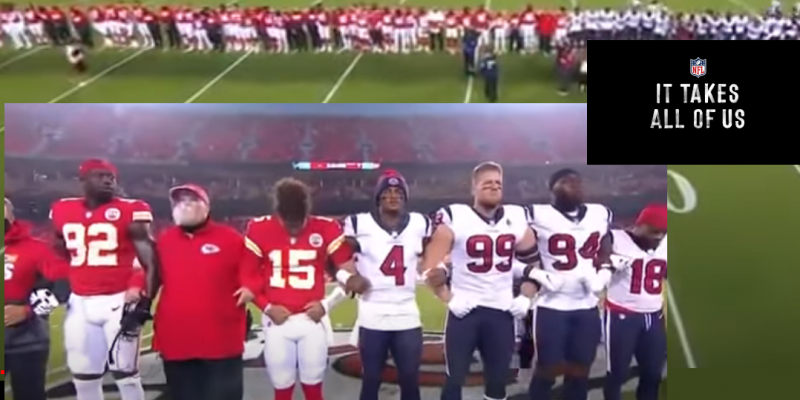 Only one player knelt but half of the roster at Thursday’s football season kickoff avoided the National Anthem entirely.

While The Hayride staff and many readers were boycotting the NFL, NBC’s broadcast of the 2020 season kickoff between the Houston Texans and the Kansas City Chiefs became a showcase for Black Lives Matter, progressive-liberal ideology, a vague sense of collectivism, and the continued forced-normalization of the concept of social justice.

Rather than a Colin Kaepernick-style kneeling, the Chiefs (with the exception of Chiefs defensive end Alex Okafor, who took a knee) stood for the National Anthem and the Black National Anthem “Lift Every Voice and Sing.” However, the Texans stayed in their locker room — this on the eve of 9/11 commemorations.

According to a press statement for the Texans, a “leadership group” of 20 players made the decision to remain in the locker room during the Anthem “so as to keep the spotlight on the issues that need to be addressed.”

“It’s really not about the flag,” Texans Head Coach Bill O’Brien said in the release. “It’s about making sure that people understand that black lives do matter and that there is a system[ic] racism problem in this country and so that’s what our players decided to do.”

As the game proceeded, it became apparent the end zones were painted with “End Racism” and “It Takes All of Us.” The Chiefs familiar Native American logo was no longer seen as the symbol has been mothballed in response to racial justice protests.

The NFL pregame show featured video after video of players pleading with viewers to look into their hearts and confess their sins of racism and perpetuating urban poverty. “Am I next?” one player asked as he wondered if he would one day become a victim of police brutality, presumably because of his skin color (surely not his income). A mini-documentary of Chiefs player Tyrann Mathieu titled “Say Their Stories” highlighted the practice of writing or printing the names of black victims of police brutality on helmets, featuring raised fists and placing protesters in a peaceful, non-divisive light.

Players who opted to wear a Black Lives Matters decal on their helmets were be given a list of names (or, apparently, slogans) to choose from or they were free to choose a “victim of systematic racism who is not on that list,” an NFL executive told teams in July, according to the NFL Network via Fox News.

Even videos designed to highlight altruistic projects spearheaded by certain players were festooned with T-shirts sporting BLM-related slogans. There was no escaping it: today’s game was sponsored by BLM.

“Black Lives Matter” was repeated as a religious mantra during a video montage, shortly before a “moment of unity” between the Chiefs and the Texans in which the players stood side by side on the field at Arrowhead Stadium. According to the broadcast’s Chyron, the following (vague) messages that practically nobody disagrees with on the surface: “We support equality,” “we must end racism,” “we believe in justice for all,” “we must end police brutality,” “we choose unconditional love,” “we believe black lives matter,” and the titular “it takes all of us.”

The sparse audience was not fooled by the gas-lighting of those who disagree with BLM’s political goals; boos and jeers were easily heard as the players took a ceremonial entrance onto the field.

Despite the alienation of the conservative half of America (52% of Americans had a favorable opinion of BLM according to a poll released last week), NFL was predicting record-high ratings due to captive audiences unable find much in the way of entertainment outside the home due to continuing COVID-19 restrictions. However when the ratings picture became clear by mid-morning today, the kickoff audience had dropped by just over 16 percent compared to September 2019’s season opener (16.4 million viewers as opposed to 22 million last year).