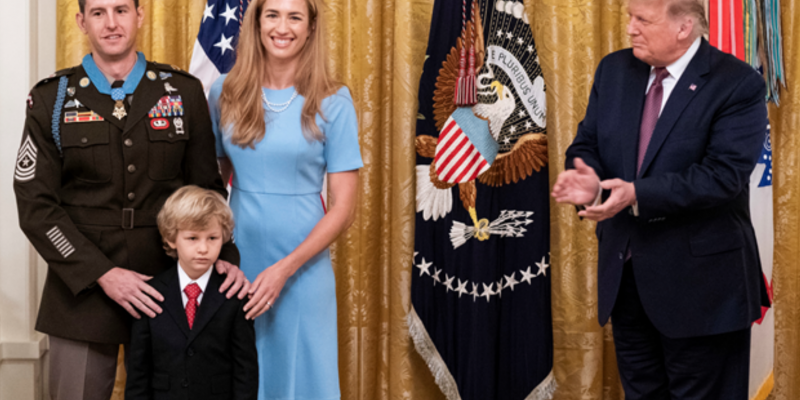 South Carolina native Sgt. Maj. Thomas “Patrick” Payne was awarded the Congressional Medal of Honor on Friday for his efforts during a 2015 rescue operation that freed 75 Kurdish hostages and killed 20 ISIS terrorists in Iraq.

Payne is the first living member of Delta Force to receive the Medal of Honor, according to Military.com.

Payne was already a veteran of 17 combat deployments when he led an assault team in a daring nighttime hostage rescue from two buildings in Kirkuk Province, Iraq, on Oct. 22, 2015.

“It was one of the largest and most daring rescue missions in American history,” President Donald Trump said of Payne’s mission. “As soon as the ramp to his helicopter went down, Pat rushed into a blistering hail of gunfire. Pat and his team swiftly overpowered the enemy, secured the building and freed 38 of the hostages.”

Payne left his secured position to help free hostages who were trapped in a second building that was on fire. He engaged the enemy with grenades and small arms fire from the roof of the burning building. He ran through gunfire, smoke and flames to rescue them. They were trapped behind a metal door secured by two padlocks.

“As the building began to collapse, he received orders to evacuate, but he refused to do so. He didn’t want to leave anyone behind,” Trump said.

“Multiple ISIS fighters detonated suicide vests ripping a portion of the building into pieces,” Trump said. “Pat and his fellow Rangers fought through the fire, the bullets and the deadly blasts.”

MEDAL OF HONOR: "Pat was called to action – he knew that his country needed him,"

Payne, from Batesburg-Leesville and Lugoff, South Carolina, and joined the Army shortly after 9/11. He received the Medal of Honor at the White House, accompanied by his wife, Allison, and 6-year-old son, Aaron.

“Pat, you embody the righteous glory of American valor,” Trump said. “We stand in awe of your heroic, daring and gallant deeds. You truly went above and beyond the call of duty to earn our nation’s highest military honor.”

The Medal of Honor is awarded to members of the Armed Forces whose meritorious conduct involves great personal bravery or self-sacrifice and risk of life.

“Five million South Carolinians could not be more proud today of our own Sergeant Major Patrick Payne,” Gov. Henry McMaster tweeted of the award given to Payne.