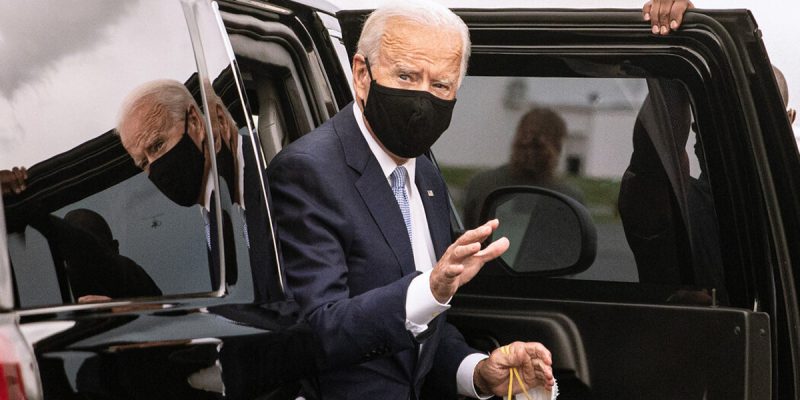 Joe Biden gets worse and worse by the day, doesn’t he?

Democratic presidential nominee Joe Biden, in an apparent shift, now says his legal team believes he would have the authority to advance a federal mask mandate through an executive order to prevent the spread of the coronavirus should he be elected.

Taking questions from reporters at a campaign event on Wednesday, Biden vowed that if elected, “I would call all the governors to the White House” to make the case on the necessity for implementing mask mandates.

Asked if he’d use an executive order to enforce the wearing of masks if some governors refuse his request, Biden said “the question is whether I have the legal authority as president to sign an executive order. We think we do, but can’t guarantee you that yet.”

“Our legal team thinks I can do that based upon the degree to which there’s a crisis in those states, and how bad things are for the country, and if we don’t do it, what happens,” Biden explained, regarding his ability to federally act if some states decline to take action.

Biden then emphasized that if he did have the legal authority to sign an executive order on masks, “I would.”

Where this comes from is an episode earlier this week when Robert Redfield, who is head of the CDC (it almost goes without saying that this more or less disqualifies anything Redfield might say, so all over the map has the CDC been), testified that wearing masks does more to stop the spread of the Wuhan virus than a vaccine will.

Which was absurd, of course, but it’s the kind of thing which would seem to mesh with this week’s other news, that a White House coronavirus task force bureaucrat named Olivia Troye has come out for Biden and slammed President Trump’s COVID-19 response as unserious.

So we finally have the contours of the presidential race where COVID-19 is concerned. Vote for Biden and you get the dictatorship of the public health bureaucrats, who will insist that you wear a mask at all times, even outdoors, until they say you don’t have to – the constitution be damned, since they’re going to pack the Supreme Court with leftist judges who will strip you of every individual right you have save for that of killing an unborn baby. Or vote for Trump, and you likely get a whole host of those public health bureaucrats packed off to employment with Big Pharma and the Bill & Melinda Gates Foundation.

It’s a pretty easy call. Particularly when Biden, who has been in the federal government for 47 years, has no idea and goes back and forth about what the constitution says on his signature public policy statement.