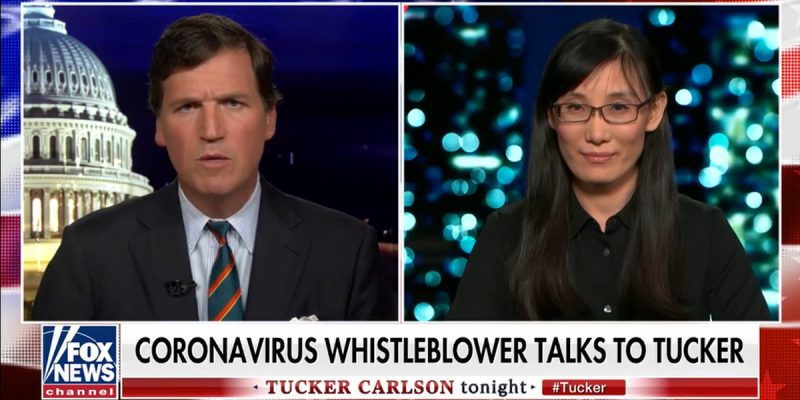 This was a bombshell interview on Tucker Carlson’s show last night, and while it’s almost surely going to be suppressed by Big Tech and the legacy corporate media the American and world public deserves the opportunity to see it and decide for ourselves whether it’s to be believed or not. It’s a crucial matter of history to precisely fix China’s role in the creation and spread of COVID-19, because an accurate telling of that story will shape geopolitics for several decades to come.

Dr. Li-Meng Yan is a virologist formerly of the Hong Kong School of Public Health, a reference laboratory for the World Health Organization, and according to her account on Carlson last night, the genome of the SARS-2 coronavirus cannot be found in nature. She says the virus is akin to a cow with rabbit ears; such a creature would have to be engineered in a laboratory.

Dr. Yan has been a whistleblower on this subject for some time. She first came to light internationally when she raised the alarm in Hong Kong about human-to-human transmission of COVID-19. That was back in December, when the official Chinese government word was that it wasn’t transmittable.

In April, she fled Hong Kong to the United States and has been working on proving her case since. Yan says all of her data from the Hong Kong lab was destroyed as part of a Chinese government cover-up.

Nevertheless, on Monday she posted a paper on the the open-access repository website Zenote, that she claims shows how SARS-CoV-2 could be “conveniently created” in a laboratory setting in six months. Yan has been making the rounds this week since then.

The paper, co-authored with two others, is titled “Unusual Features of the SARS-CoV-2 Genome Suggesting Sophisticated Laboratory Modification Rather Than Natural Evolution and Delineation of Its Probable Synthetic Route.”

It claims to note how “SARS-CoV-2 shows biological characteristics that are inconsistent with a naturally occurring, zoonotic virus.”

Other scientific research, including a team of researchers at the Scripps lab in California, have come to an opposite conclusion.

Here’s the interview. You can decide for yourself whether you think she’s credible.

The Chinese government is busy trying to make her out to be a crank. They deny she did any research on human-to-human transmission of the virus, and the director of the Wuhan Institute of Virology where this thing is alleged to have come from has said that’s impossible.

Nobody knows who Li-Meng Yan is. Maybe she’s lying, maybe she’s a crank.

Or maybe she’s telling the truth. What we can be sure of is that the Chinese government has zero credibility of any kind as it relates to COVID-19. So when the Chinese Communist Party earnestly attempts to make us believe she’s a liar or she’s crazy, it’s a bit of a difficult sell that we’re going to just take their word for it. It would take all day to go through the lies China’s told about COVID-19. Let’s not forget China’s the one who tried to claim it was the U.S. Army who spread COVID-19 initially in Wuhan, which is by far the dumbest lie anyone has told about the pandemic to date.

But they’re telling the truth about this?

Let’s remember that both President Trump and Secretary of State Mike Pompeo have voiced suspicions along the lines of Dr. Yan’s message. This isn’t some conspiracy theory. It might or might not be the truth, but it hasn’t been debunked beyond a shadow of a doubt, and it won’t be so long as China’s government stays busy suppressing information about how this thing was created and got out.