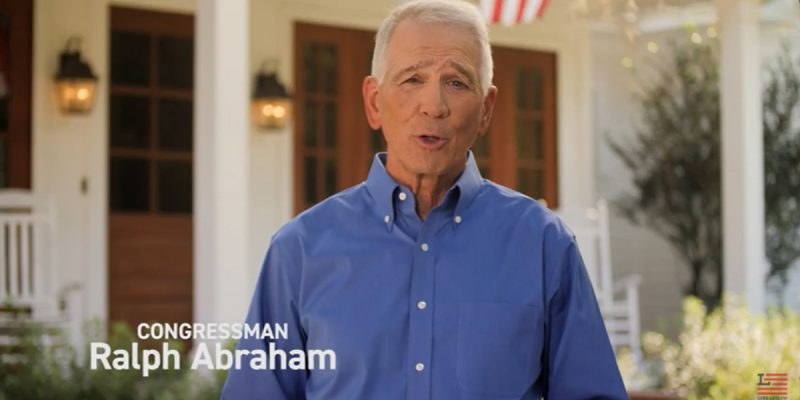 From a press release that popped out this morning comes something everybody has known for a while – Dr. Ralph Abraham is backing his former chief of staff Luke Letlow as the latter seeks to replace the former in the 5th Congressional seat up for grabs in November.

The ad will run in the Monroe and Alexandria television markets and on digital platforms throughout the district.

“As my chief of staff, Luke Letlow worked tirelessly with President Trump and me for the people of the 5th District, bringing jobs back and helping businesses grow. We need Luke in congress to continue the fight now more than ever, and I encourage folks all across Louisiana’s 5th District to vote for Luke Letlow for congress this fall,” said Congressman Ralph Abraham.

“Congressman Ralph Abraham set the bar with his service to the 5th Congressional District, and I’m proud to have his support. Having worked alongside Congressman Abraham and President Trump, I know what it’s going to take to move our state forward, bring jobs back, and help businesses grow,”said Luke Letlow.

What does this mean? Well, there is no doubt Abraham pulls some weight in the district he represents. He’s won big there in three different congressional elections, and while Abraham came in a close third in the gubernatorial primary last year it wasn’t due to a lack of support in the 5th District.

We still have yet to see any polling on the race, which pits Letlow against state rep. Lance Harris of Alexandria and Ouachita Parish Police Juror Scotty Robertson and two others – Matt Hasty of Pineville and Allen Guillory of Opelousas – on the Republican side, with four Democrats – Martin Lemelle of Ruston, Sandy Christophe of Alexandria, Philip Snowden of Monroe and Jesse Lagarde of Amite, also in the race. Based on fundraising, one would have to handicap Letlow as the favorite with Harris as the most likely GOP competitor. Lemelle seems like the most active Democrat, though whether he can make the runoff in a fairly red district is questionable.

Interested in more national news? We've got you covered! See More National News
Previous Article VIDEO: DJ Rhett’s Hilarious “Tremors” Spoof Of JBE
Next Article BAYHAM: On Watching The Saints Despite It All