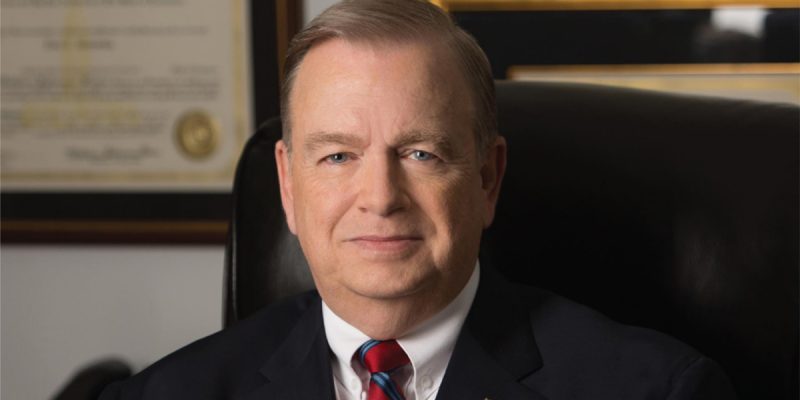 We aren’t making too many endorsements yet in Louisiana’s electoral races, in large part because some haven’t taken shape and in others it’s pretty obvious who a conservative’s best candidate will be. But we want to single out one race in particular, that being the Public Service Commission District 1 race, and give a whole-hearted endorsement of Eric Skrmetta for another term.

We don’t actually do that many endorsements, as our readers know. We don’t really see all that many politicians we think are worth endorsing, for one thing, and for another, we find that when there is one worth endorsing, he or she often ends up in a race with another who is also worthy. As dual endorsements are worthless, we usually just let the whole thing go.

And Eric doesn’t need our endorsement to win re-election. But he deserves it, and if you live in District 1 he deserves your vote.

At election time, the word leadership is tossed around with little to no justification for its use.  It’s a word that is totally overused and undervalued.  It’s rare that an elected official comes along who really shows leadership, living up to the qualities we’d expect from someone we elected to work on our behalf. Those have become, in large measure, a joke. Just look at Donald Trump’s presidency and the political firestorm surrounding him and you can see what our current culture does to the concept of leadership.

But when leadership does exist, you can see what it produces. We’ve seen it with Skrmetta’s work since joining the PSC.

When Commissioner Skrmetta was elected to the Louisiana Public Service Commission, our state ranked 26th in the nation in highest utility rates.  If you’ve ever seen the movie “DAVE”, you might be reminded of it by examining his tenure. Skrmetta channeled his best Kevin Kline, sharpened his pencil, and began erasing expenses to ratepayers.  Leadership generates results. Through Skrmetta’s conservative leadership, the PSC brought us to the lowest utility rates in the nation.

Our utility rates are now an astonishing 35% less than the national average. It’s difficult to believe such a number coming as a result of a political body in this state. That simply doesn’t happen here. But it did. If you consider what the usual effect of public policy in Louisiana is on our economy, and if you consider what it might look like here without those league-leading affordable electric rates, you start to realize how important this race is and why we’re making this endorsement.

Skrmetta didn’t get Louisiana to that milestone only by cutting expenses.  What the PSC has done to reduce rates is to reduce returns on equities to utilities – essentially capping their profit for the benefit of ratepayers.

Skrmetta and the PSC staff created a Wall Street-based bond finance program, eventually obtaining bonds well below bank finance rate, for utilities to draw from. That saved hundreds of millions of dollars for ratepayers.  He also argued against ratepayers having to pay the costs of executive benefits for utility companies’ and electric co-ops’ top brass fatcats, and Skrmetta prevailed. He also held companies accountable for storm cost losses that the Commission believed could have been avoided, which is something exceedingly rare among Louisiana’s Chicken In Every Pot political class.

He’s also led in the fight to usher in new efficient power plants to replace some of the archaic, money-gobbling coal plants the state is still saddled with. At this point Louisiana shouldn’t be powered with anything other than natural gas given that we have far more than enough of it under our feet to run a state many times our size and it’s the cheapest fuel around. Eric knows that, and has advocated strongly for smart modernization.

But you won’t see too much of this glowing praise elsewhere. That’s because Skrmetta is direct and to the point.  His candor is sometimes considered brusque, and he’s made enemies of some of the grifter class for having spoken the truth on the PSC. More on that below. But his peers get it.  He’s on the Board of Directors of the National Association of Regulatory Utility Commissioners (NARUC), the national association representing the State Public Service Commissioners across the country.  Skrmetta is, in fact, NARUC’s liaison to the White House advising President Trump on policy that the PSC regulators around America have dealt with.  He’s a high-profile policymaker on matters dealing with transmission, distribution and regulation of utility services.

We know Eric personally, and what we know of him is that after two six-year terms as an elected public service commissioner he still doesn’t carry himself as one of those calculating career politicians who talk out of both sides of their mouths. He’s like the Honey Badger; he doesn’t give a…well, you know. And it’s because he doesn’t need the PSC. He’s been successful in the private sector, and he could get out of politics tomorrow without missing a beat. So when he takes on fatcats who want to prey on Louisiana’s ratepayers, it’s because his BS detector has gone off. And it’s a good BS detector.

Here’s an example: when Obama’s insane Cap & Trade idea threatened to become an unfunded tax on ratepayers in Louisiana, Eric Skrmetta filed a lawsuit against the federal government and won. That saved Louisiana’s ratepayers billions of dollars.

Another example: when the politicians in the Louisiana Legislature stupidly doled out the nation’s most generous solar credits, covering up to 50 percent of the first $25,000 spent to install a rooftop solar system on top of the 30 percent federal solar tax credit, it included a rate structure that wasn’t fair, created a burden on the poor and Skrmetta argued that the system created a discriminatory subsidy.  He noted that it had to change to create fairness for all.  He won that fight, and brokered a compromise that protected the longevity of rooftop solar but ended the state handout that cost all Louisiana citizens millions of dollars.

That rooftop solar panel squabble didn’t mean Skrmetta was completely against solar energy, despite the fact he’s been targeted by that industry as their most important political takedown in the state for more than a decade. The thing is, he’s in favor of solar – but what he’s been pushing is industrial-scale solar projects rather than the rooftop scam. And that’s happening; Louisiana’s energy portfolio is diversified with more than a dozen large scale solar fields either in place, or in line within the coming year. Another seven are planned in the near future.

But there is one company in particular, PosiGen, who has declared a jihad on Skrmetta and is out to get him.  PosiGen, which is a rooftop solar concern with an awfully shady history, is led by a convicted felon named Thomas Neyhart. He’s the guy who, it appears, bought up Russel Honore and turned him loose on Louisiana industry with the ridiculous Green Army advocacy that makes its way onto the headlines occasionally.

And boy, does Neyhart have it in for Skrmetta. According to campaign finance reports, Neyhart, and those who do business or associated with Neyhart, are funding a large part of the opposition campaign against Skrmetta in an act of vengeance. Six years ago PosiGen was the driving force behind an utterly fraudulent RINO campaign which nearly scammed the people of Louisiana out of our foremost defender of low electric rates. They put up a left-wing loon who had been shilling for rooftop solar named Forest Wright, who didn’t even live in District 1 and most certainly was no conservative on energy or any other issue, and ran him against Skrmetta as a Republican. Neyhart and the solar scammers threw a million dollars into fraudulent attack ads against Eric and came very, very close to knocking him out.

Now they’ve spread their money out into a cornucopia of challengers hoping to get him into a runoff with one of them, and see if maybe somebody with a bit more credibility than Wright had might have a shot at replacing Eric with a more pliable commissioner. If that happens, we most certainly won’t have the lowest rates in the country.

We’re saving over $8 billion over the past decade or so by cutting utility costs. The PSC has returned to the consumers over a half a billion dollars in rate credits.  The PSC has developed new efficient power plants to help improve Louisiana’s energy efficiency. Our utility company emergency preparedness plans have accelerated restoration of lost power at a rate better than anything we’ve previously had. Hurricane Laura saw a pretty amazing restoration of power, even in Lake Charles where the system was utterly destroyed. Those utility companies have enhanced pre-storm preparations like tree-trimming; we’ve largely taken that for granted, but compare what happens here to California, where environmentalist loons won’t let power companies trim trees near power lines, and they have to shut power off and create brownouts because in forest fire season winds can push branches onto power lines and start fires.

Skrmetta led in setting higher quality-control standards for Louisiana’s taxi industry.  He improved water systems across the district and demanded transparency by showing line item costs on all utility bills.  He even protected prison telephone monitoring systems to keep criminals from being able to use telecommunications to threaten witnesses or direct new crimes.

If this is sounding like a public relations piece for Skrmetta’s re-election campaign, fine. Because we can’t really impress upon voters enough the importance of keeping Skrmetta on the commission. Right now he’s the single most effective conservative politician in the state. Because most of what the PSC does is in the weeds and most of our readers’ eyes would glaze over if we tried to explain all the regulatory minutiae that govern public utilities, and even much of the scam artistry that takes place is tough to get a handle on, we don’t cover the PSC as much as we otherwise would. Frankly, it’s the fact that Eric has a handle on all this stuff and he can keep Louisiana’s 3-2 Republican majority on the PSC more often than not from falling apart (Mike Francis is also stalwart; Craig Greene is pretty good when he wants to be) which allows us to skate on our PSC coverage.

But this isn’t just The Hayride talking. Everybody who’s paying attention is backing Skrmetta, largely because we all had such a scare with the Forest Wright near-disaster in 2014.

So that’s it. Vote for Skrmetta if you’re in District 1, which is the PSC’s suburban New Orleans district. If you don’t, we can pretty much guarantee you won’t like the results.