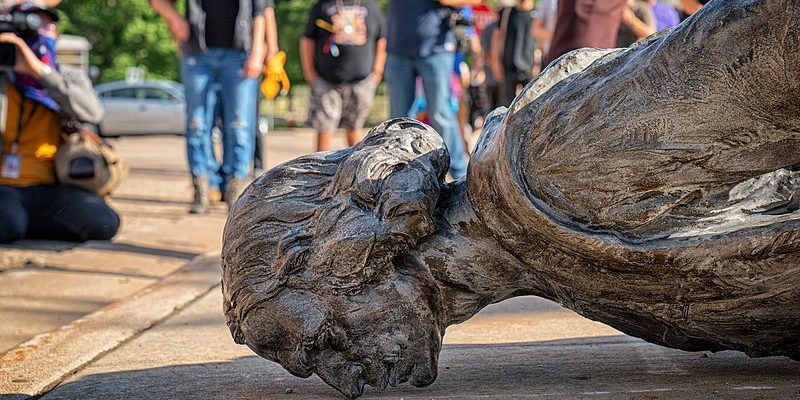 A roving mob of 200 “direct action” protesters in Portland on Sunday night hewed down statues of American Presidents Theodore Roosevelt and the Great Emancipator Abraham Lincoln as part of an “Indigenous Peoples Day of Rage” — an event designed to counteract Columbus Day.

Protesters, some armed, vandalized walls, broke windows, and damaged other fixtures with red paint at and around the Oregon Historical Society.

The iconoclasts, according to the The Oregonian, identified Roosevelt as one who harbored racist attitudes toward Indians which were common at the time. Lincoln, they say, was the Commander in Chief who oversaw a military operation that hanged 38 Dakota men.

Both statues were brought to the city in the 1920s. A spokesman for the Oregon Historical Society told local media that “no damage to any of the exhibits” was done. However nearby office buildings and towers reported smashed windows and other acts of vandalism.

The vandals took strides to cover up their actions. According to the Oregonian:

People in the crowd were repeatedly admonished not to film. Passersby who happened upon the group were ordered by demonstrators to stop filming or delete photographs, including an apartment resident who had lasers shined at his eyes and a liquid thrown in his face as he appeared to shoot video of the scene from his terrace.

From the hip: Today being Columbus Day, we wonder how many memorials to the famed explorer-conquistador (as well as the progress of Italian-Americans) will be pressed-in on by disgruntled hordes and quite possibly damaged or even toppled.

During this, let’s not place the blame on Portland-style radicals alone. Elected and appointed authorities shoulder the lion’s share of the blame when it comes to historical monuments disappearing from the American landscape.

Nearly 40 Columbus statues, reliefs, and mosaics have been removed following the George Perry Floyd protests alone, and according to the valuable yet often-imperfect crowdsourcing on Wikipedia. But according to that list, only four were removed following vandalism. The rest were removed by the real iconoclasts: flaccid city and academic officials kowtowing to pressure or acting on their own to mothball them.

Protesters have famously toppled monuments across the country, leading to a few cringeworthy, misdirected efforts such as the pulling down the visages of Union Gen. Ulysses S. Grant or of abolitionist and Union Col. Hans Christian Heg. In Austin, protesters even tagged a park statue of Blues Rock legend and native son Stevie Ray Vaughn, likely because he was wearing a wide-brimmed hat.

Those are examples of the ignorance of the pack. But in a more calculated maneuver, and also in Austin, the University of Texas removed statues of progressive U.S. President Woodrow Wilson and Texas Gov. Jim Hogg — all because they were crafted along with a collection of four Southern heroes that included Jefferson Davis and Robert E. Lee (also removed). President Gregory Fenves later announced Hogg would be returned to an outdoor place on campus — without really apologizing.

(As an interesting aside, the sculptor of the UT statues was Italian-born Pompeo Coppini, who also crafted the embattled Alamo cenotaph that was recently kept in place by the Texas Historical Commission after state and city leaders attempted to move it to a less central location.)

To reiterate: We can point to radical activists and worry about the future of our historical monuments, or we can vote out those who passively stand by, authorize, and even encourage greater acts of iconoclasm than what angry mobs can ever imagine. Early voting is taking place in many states. Voters, do your homework.

Interested in more national news? We've got you covered! See More National News
Previous Article An Endorsement In The Crucial Race Nobody Is Paying Attention To
Next Article 24 Republican governors call on Senate to quickly confirm Barrett to U.S. Supreme Court