This morning, on the floor of the Louisiana House of Representatives, HCR 9 passed on a vote of 67-22. That, we will admit, is a real sign of process toward reopening the state.

The bill has a pretty long list of authors…

There probably isn’t much of anything to be made of the fact that some 20 of the Republicans in the House didn’t sign on as co-authors. Some didn’t sign on to the various petitions to reopen the state and some did.

There were four Republicans who missed the vote – Richard Nelson, Mary Dubuisson, Joe Stagni and Paul Hollis. Nelson was a big petition signer and even circulated the last one. Hollis was also supportive of the petition. Stagni was opposed.

No Republicans voted against the resolution. 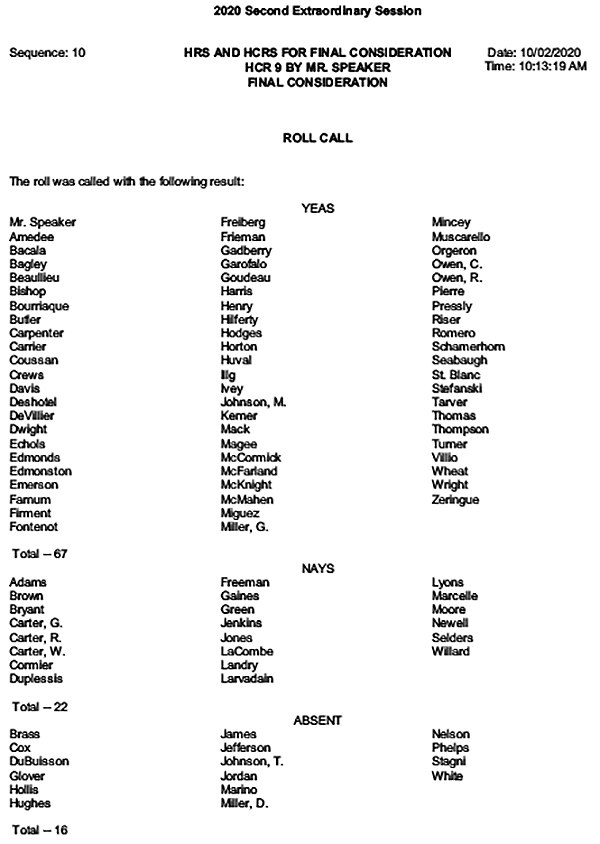 As you can see, there were even some Democrats voting for it. Barbara Carpenter, Vincent Pierre, Francis Thompson and Greg Tarver were all “yes” votes.

As we noted in our last update, HCR 9, assuming it can get 20 votes in the Senate, will do what those petitions were aiming at doing. It will reopen the state, at least until 30 days beyond the end of the current legislative session.

But yesterday, as the House & Governmental Affairs Committee was debating Senate Bill 29, which is a bad bill aimed at emergency management reform making it harder in the future for legislators to overturn a governor’s emergency declaration, Rep. Beau Beaulieu essentially proposed a deal to Senate President Page Cortez – if the Senate were to pass HCR 9, SB 29 would come along a long easier.

Cortez didn’t really take the bait there, waffling and saying that he can’t speak for the other senators.

We’re told there is a majority in the Senate for HCR 9. We’ll see what happens when the state’s legacy media, which is likely to scream about how irresponsible it is to reopen the state when The President And The First Lady Just Tested Positive For COVID, floods the zone.

That shouldn’t move a single one of the Republican senators, but there’s a long history of that body blowing in the wind and being susceptible to influence by the governor – who most certainly will not support that resolution.

As a voter, HCR 9 is the only measure you should really care about.

We aren’t crazy about it only suspending the public emergency law for 30 days beyond the end of the special session, but realistically what’s most likely is there will be no spike in COVID cases of note, and therefore Edwards wouldn’t dare try to reimpose his shutdown in such a case.

There wasn’t a spike in COVID cases coming out of Labor Day, despite Edwards’ doomsaying that there would be.

Nor was there a spike in COVID cases coming out of schools reopening, though Edwards claimed he couldn’t reopen the state for fear of a spike.

A spike should the state return to normal is therefore unlikely. That 30 days beyond the end of the special session is in effect a death sentence for Edwards’ shutdown. Politically it would be suicide for him to reimpose anything if the numbers don’t move.

What’s more, if nothing happens after the Legislature forces the state back open, John Bel Edwards is going to have a great deal to answer for. He will have kept Louisiana restricted for no good reason, and with the Legislature acting to extricate itself and the citizens from the shutdown, it’s going to be all his fault.

Beyond the resolution, though, is the question of how to legislate a future episode of a public health emergency. SB 29, which is due to be heard on the House floor later today and will likely be amended, is one instrument aimed at reform. We think it’s the worst one. HB 4, which passed earlier, is another, and better bill. HB 15, by Rep. Larry Frieman, is another. So is HB 60 by Rep. Barry Ivey, and HB 68, which is House Speaker Clay Schexnayder’s bill  The latter is somewhat complicated, but it’s a bit similar to SB 29.

But honestly, the chances of having this kind of situation coming up again are very slim. It’s highly unlikely Louisiana will ever have so authoritarian a governor as John Bel Edwards who will so happily shut the private economy down. You’re very unlikely to have a situation where the Legislature is going to have to step in to pull the governor off the neck of the citizenry.

Interested in more news from Louisiana? We've got you covered! See More Louisiana News
Previous Article There Are Now One Million Registered Republicans In Louisiana
Next Article SADOW: LSU Is One Of The Worst Universities In America For Free Speech