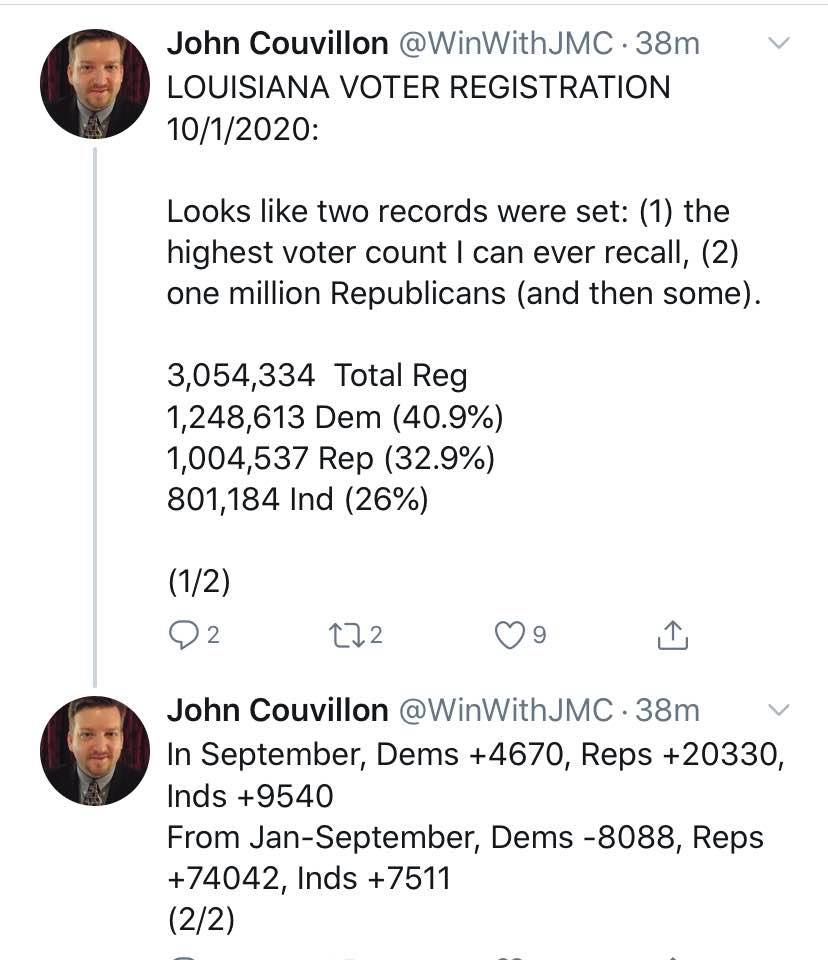 We saw this million-voter mark coming a month ago, when Republicans came just shy of it in the Sept. 1 report.

But at that point the Democrat Party wasn’t the party of court-packing, street riots, economic shutdowns, transgenderism and bans on live music and dancing, which it’s managed to embrace over the last year. None of those things resound with Louisiana’s voters, and Democrats – particularly white Democrats – are badly on the wane here.

So is it an unalloyed good thing that so many of these people are becoming Republicans? Not really.

What it means is that even though closed party primaries are increasingly likely to become a reality in Louisiana – because conservatives in the LAGOP have been screaming for them for years, and also because the Legislative Black Caucus has finally figured out that if closed party primaries should come to pass they would completely control the Louisiana Democrat Party (blacks are now 59 percent of Louisiana’s Democrats) – one of the persistent problems in aligning the state’s political class to its voting base might even get worse.

The concern has always been that “centrist” or “moderate” political candidates would migrate to the GOP in the knowledge that (1) there’s no place for moderates in the Democrat Party anymore and (2) you have to have an “R” next to your name to win in most places in the state. With a jungle primary like Louisiana has, this creates a common problem in that in lots of races a centrist, or really even center-left, candidate who puts an “R” next to his name and then rounds up all the Democrat voters will beat a conservative in a jungle primary, and knowing this the Democrats won’t even put up a candidate sometimes.

Pass the closed party primaries, and you do away with that problem to a large extent, because if Democrats can’t meddle in a GOP primary they might as well run their own candidates even if they’re going to get killed. And Republican voters, choosing between two or more relatively equal candidates, will nominate the most conservative of the bunch more often than not.

But the bigger the GOP gets, and the more “centrist” voters it attracts, the less likely it is that the more principled conservatives will get the nomination in a closed party primary. We’ve seen in other states which have undergone a significant shift to the GOP that the RINO factor has a mushrooming effect; it’s what Texas conservatives complain about constantly, and you hear it often in Florida and Georgia as well.

But the problem of selling your own party’s voters on its message ought to be a smaller and more manageable one than not having those voters at all, so the above certainly shouldn’t be taken to suggest it’s less than a victory to have topped the million-voter mark. LAGOP chairman Louis Gurvich and his team ought to be congratulated; it’s taken a lot of sweat and toil to get to this point, and they have reason to be proud to hit that milestone.

Next up: passing the Democrats in voter registration before the 2023 gubernatorial election.


Interested in more national news? We've got you covered! See More National News
Previous Article FAILURE THEATER UPDATE: Unanimous Passage Of A Bill Nobody Thinks Is Real
Next Article This Will Get You Put In Facebook Jail In October 2020