I’ll just say it. I hate Facebook. I hate it with a burning passion.

I hate Facebook despite the fact that in my line of work I have no choice but to maintain a very large social media presence. Others are on Twitter instead of Facebook; I hate Twitter worse than I hate Facebook, so I’m stuck with Mark Zuckerberg’s awful platform.

But my hatred of Facebook and my hatred of Twitter are coming together into one giant ball of anti-Big Tech animus. How can you not hate this? 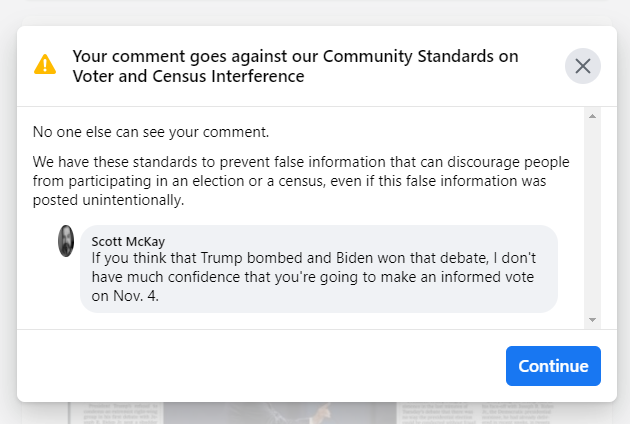 That was a joke offered at the expense of someone who was saying outrageously stupid things.

But Facebook bans people from their site for 24 hours for making that joke.

And why? I’ll tell you why. Because you might think you’re a customer of Facebook. You aren’t.

They aren’t charging you anything to be a user. Because you aren’t a customer.

You’re their PRODUCT. They sell your information to Lord knows who.

You’re a hen in a hatchery. You’re a cow at a dairy. They don’t give a damn about you. Why do you think they do the things they do? They censor you, they fact-check you, they treat you like a five year old and put you in time out for making a joke or saying something slightly off-color. Nobody treats their customers that way.

Twitter is even worse, or a least just as bad.

And with this election coming up, it’s worse than ever before. Because Facebook isn’t just riding herd on its users in an effort to keep people from expressing their opinions on its platform. That would be bad enough. But it’s bigger than that.

You probably didn’t hear about this…

Facebook CEO Mark Zuckerberg and his wife, Priscilla Chan, are donating $300 million toward enhancing access to voting in the United States.

The Center for Tech and Civic Life and The Center for Election & Innovation Research, organizations focused on improving the voting process, said in a statement Tuesday that the donation will “promote safe and reliable voting in states and localities during the COVID-19 pandemic.”

“Many counties and states are strapped financially and working to determine how to staff and fund operations that will allow for ballots to be cast and counted in a timely way,” Chan and Zuckerberg said in a statement. “These donations will help to provide local and state officials across the country with the resources, training and infrastructure necessary to ensure that every voter who intends to cast a ballot is able to, and ultimately, to preserve integrity of our elections.”

That doesn’t sound too bad, right?

The Center for Tech and Civic Life will use the money to “re-grant funds to local election jurisdictions across the country to help ensure that they have the staffing, training, and equipment necessary” to ensure that voters can participate in the election in a “safe and timely way,” according to the press release.

The Center for Election Innovation & Research will use the money to “assist state and local election officials to ensure elections are secure, voters have confidence in election outcomes, and democracy thrives as civic engagement grows,” according to the press release.

“This donation will greatly assist election officials as they seek to inform voters about their voting options and any changes, educate them about how they can successfully ensure their ballot is received and counted, and bolster transparency and legitimacy,” David Becker, executive director of The Center for Election Innovation & Research, said.

If you haven’t spotted the devil in the details, we’ll spell it out for you.

That $300 million doesn’t pay to help out election officials everywhere. It pays for SELECTED places to get grants to help them run elections and process voters.

And where do you think the local election people are “cash-strapped?” Not in the nice suburbs, that’s for sure. They’re in places where you get 10,000 votes for Joe Biden and three for Donald Trump.

This has already turned into a mess, by the way. Three weeks ago, in Wisconsin…

Today, the Wisconsin Voters Alliance filed a complaint with the Wisconsin Election Commission in response to millions of dollars being funneled by the Center for Tech and Civic Life (CTCL) to five Wisconsin cities which, past data show, vote overwhelmingly for Democrats. These grants are intentionally limited to these heavily Democratic areas for the purpose of boosting voter turnout there in a clear effort to sway the election statewide.

“We’ve seen government playing favorites in elections before,” explained Phill Kline, Director of the Amistad Project of the Thomas More Society, representing the Wisconsin Voters Alliance. “Through much of last century, southern states made it difficult for blacks to vote and easy for white citizens to vote, promoting racism in the manner that they orchestrated their elections. Government targeting a demographic to increase turnout is the opposite side of the same coin as targeting a demographic to suppress the vote,” Kline added.

CTCL is a left-leaning election activist group pushing major government voting initiatives in Democratic strongholds, which raises alarms about the integrity of the November election and demonstrates a present danger in allowing private groups to influence elections. CTCL boasts that its major funding sources include Google and Facebook, and the group just recently received a contribution of $250 million from billionaire Facebook founder Mark Zuckerberg and his wife.

Cumulatively, CTCL has thus far granted $16.3 million to the five cities in Wisconsin and Philadelphia, Pennsylvania, which had cast over 82% of their over one million combined total votes for Hillary Clinton in 2016. President Trump won Wisconsin by 22,748 votes and Pennsylvania by 44,292 votes that year.

In Wisconsin, CTCL has granted a total of $6.3 million in municipal funding from private sources to the Cities of Green Bay, Kenosha, Madison, Milwaukee, and Racine. The grants were issued directly to the cities and not the Wisconsin Elections Commission, which is responsible for managing elections throughout the state. A plurality of the funds — about 40% — went to support both vote-by-mail and early voting efforts. Around $1 million went to “voter outreach and education efforts.”

“This initiative by CTCL is clearly designed to provide a boost in registered voters, limited only to traditional leftist strongholds, in a critical swing state that is likely to determine the outcome of the presidential election on November 3, 2020,” Kline said. “Allowing private monies to control state spending on voter turnout is an invitation to the state to engage in partisan politics in the operation of elections. This represents a present danger to favor one class of voters at the expense of others and attempt to pick winners and losers in the election this year,” he concluded.

So if you’re being put in Facebook jail for saying things that don’t fit Mark Zuckerberg’s political orthodoxy, just understand that your inconvenience and irritation is the mist coming off the tip of the iceberg of how bad he actually is. The money he’s making selling your personal information so that advertisers can creep you out by showing you web banner ads that involve things you clicked on two minutes ago, he’s plowing into leftist groups which are essentially bribing local elections officials to turn out the Democrat vote.

This has already happened in Louisiana, by the way. Attorney General Jeff Landry is incensed about it. These CTCL people invited local elections officials in at least four parishes we’ve heard about – Caddo, St. Landry, East Baton Rouge and Orleans Parishes – to apply for grant money.

Why those four parishes? Well, there’s a mayor-president race in East Baton Rouge which could end up in a competitive Republican-vs-Democrat contest. And in the other three there’s a DA race. By now you should certainly know, though as Newt Gingrich found out you’re not even allowed to talk about it on Fox News, much less Facebook, that left-wing billionaires like George Soros have been buying up district attorney races all over the country with large sums of money never before spent, and the result is that criminals’ best friends are coming into power.

So Zuckerberg is trying to throw money at local election officials in places where (1) they think turning out Democrat voters can be decisive, at least locally, and (2) where there are competitive local races which will play a large role in how those localities are governed.

Yes, I hate Facebook. The real question is, why don’t you?

We need a mass exodus from Facebook. And no, not to Parler. I like Parler better than Facebook, but Parler operates on the exact same business model as Facebook does. We need something better than that.

Interested in more national news? We've got you covered! See More National News
Previous Article There Are Now One Million Registered Republicans In Louisiana
Next Article America’s COVID Stakes Just Skyrocketed, Which Might Be A Good Thing