Surely by now you’ve heard that President Trump has announced he and the First Lady have tested positive for COVID-19. 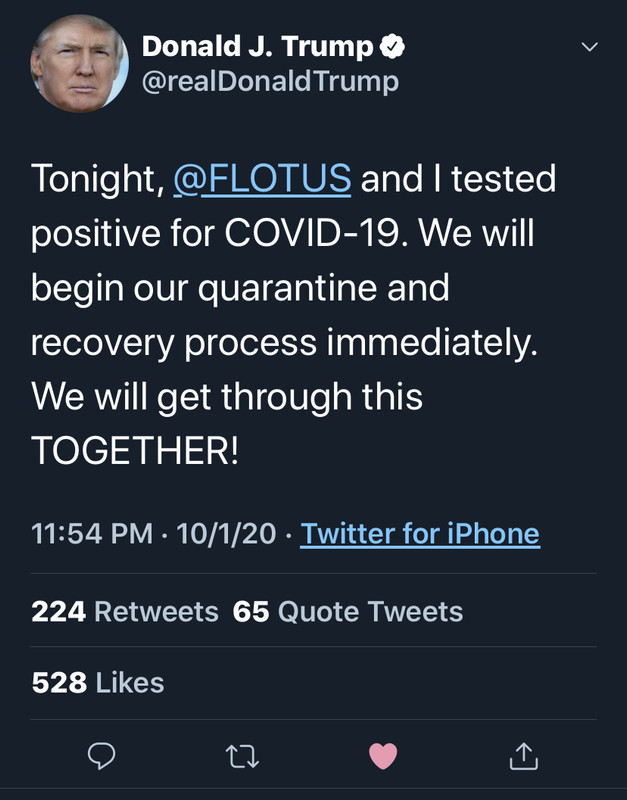 It was pretty much a certainty that Trump would test positive for this thing at some point. COVID-19 is a coronavirus, and the thing about a coronavirus is that it will ultimately be everywhere.

It appears Trump may have got it from Hope Hicks, his top aide, who tested positive earlier last night.

It’s good and it’s bad that Trump would test positive for it now.

It’s good because eight months on from this thing coming over from China (if not longer; nobody should actually believe the Chinese story about when the virus got out and began to spread), there are lots of different therapies doctors can try which have a track record of success in mitigating or knocking out the effects of COVID. That wasn’t really the case when, say, UK Prime Minister Boris Johnson got it several months ago and was put out of commission for an extended period of time.

Obviously, it’s bad since we’re a month out from Election Day and even in the best of circumstances this is going to reduce Trump’s ability to fly around and conduct those massive rallies he’s been holding. It’s also bad for the country, because we really don’t need to see stuff like this… 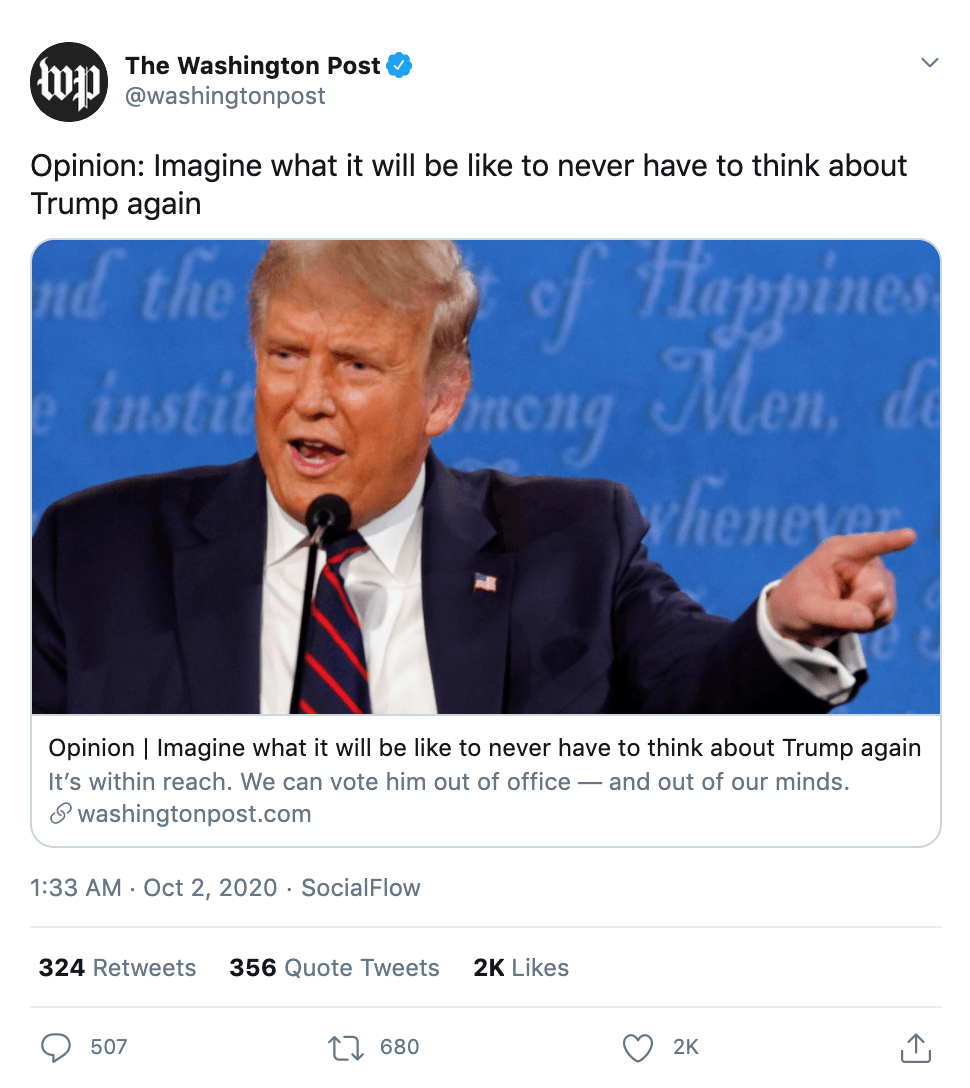 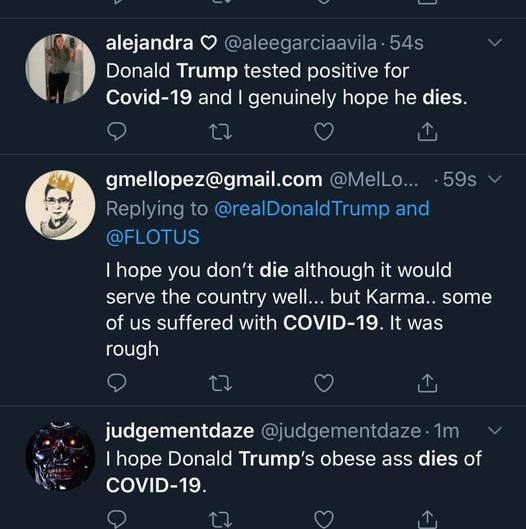 So Now Trump Has Earned Your Trust? A Note of Covid Caution from Michael Moore….There is one absolute truth about…

Pelosi said, “Of course, as with everyone, we all received that news with great sadness. I always pray for the president and his family that they’re safe. I continue to do so more intensified, and I know that he’ll have the best of care, and that’s what we want for everyone in our country.”

She added, “I hope this will be a moment where people will understand that what we have in our HEROES bill and have had in our conversations over and over is, we must have testing, tracing, treatment. We must have spatial distancing. We must be wearing our masks. We must have sanitation because it can help crush the virus and stop the spread. So maybe now that people who see the president of the United States with all the protection that he has and the first lady still having this exposure, it might be, as you say, a learning experience. But more than learning, it has to be something that is acted upon. This is tragic. It’s very sad. But it also is something that, again, going into crowds, unmasked and all the rest was sort of a brazen invitation for something like this to happen. Sad that it did, but nonetheless, hopeful that it will be a transition to a saner approach to what this virus is all about.”

The barely-concealed glee with some of these people at the news of the Trumps testing positive isn’t likely to sell well, and in fact it actually plays perfectly into Trump’s value proposition – which is that the Left is so noxious and so awful that Trump’s often-caustic tone is necessary rather than an accelerant to our toxic national political situation.

There are a decent number of voters out there who have no problem with Trump’s job performance but still don’t want to vote for him to be re-elected because of that tone. But Trump has never wished COVID on anybody, and if the Left in this country and even a number of highly-placed Democrats start running around wishing that he dies from it, those squishy emotional types are going to be willing to forgive Trump his mean tweets and rude debate interruptions and so forth. They’ll be turned off more from the nastiness of the other side.

And they’ll be more willing to understand the conservative defense of Trump – which is that he fights because it really is that bad out there and nice-guy Bush Republicanism is what got us to this point.

Assuming that Donald and Melania are fine, and so far that is the case, and in all likelihood given the development of medical science to treat the virus they’ll stay that way, it’s also going to be a serious blow to the Biden narrative that the country needs to be shut back down to beat COVID. That narrative is, of course, in place in all the blue states – which are the ones holding the country’s economy back. The September jobs numbers came in and the economy created 661,000 jobs, a good number, and unemployment ratcheted down some more, to 7.9 percent. But the New Yorks and Californias and Michigans are still in the way to getting things back to normal. And of course that’s going to be true until after the election is over.

It might end up a major mistake for them to have done that if Trump never shows more than mild symptoms of COVID. He’s the most visible case of the virus on the planet now, and if he doesn’t get sick from it, the entire narrative of shutdown culture and mask-wearing and malaise which the media and mostly Democrat politicians and public health bureaucrats have built will fall apart in a country which is ready to reopen as it is.

Of course, the flip side to this is should Trump end up actually ill from COVID, should he end up in the hospital like Johnson did, it’s a nightmare scenario. At that point his campaign is essentially over and Joe Biden will win the election. Worse, Biden will have all the gas in the tank he needs to declare the entire country will have to shut down for an indeterminate amount of time in order to beat the virus – when the Left wants a shutdown for the purposes of climate change as well. It doesn’t matter that their own “experts” have said COVID shutdowns don’t affect the climate, they will still push for them and Biden will go along, as he goes along with everything they say.

If that happens, we all get to find out that the worst fears, namely that the shutdowns aren’t a prudent measure to stop the spread of the virus but rather the manifestation of this Democrat Party’s pathological desire for control over every aspect of Americans’ lives, have come true. And what happens then could very well tear the country apart a lot worse than it already has been.

These are some very high-stakes times, ladies and gentlemen. Pray for the country, because we need it.

Interested in more national news? We've got you covered! See More National News
Previous Article This Will Get You Put In Facebook Jail In October 2020
Next Article GURVICH: Thoughts On Our First Million