Today there are Failure Theater sessions on the floor of both the Louisiana House and Senate, and it’s the Senate side which is the subject of major interest.

Because there are three important pieces of legislation currently sitting on the Senate calendar which did not receive an up or down vote before the body was adjourned until Monday.

Those are HB 4 by Rep. Mark Wright, which would reform the state’s emergency management process to require legislative approval before a gubernatorially-declared public health emergency can be extended beyond 30 days, SB 29 by Senate President Page Cortez which would put such an emergency declaration in front of a legislative committee after 30 days and require a petition of a majority of both houses to cancel such an emergency, and HCR 9 by House Speaker Clay Schexnayder, which would suspend state law empowering Gov. John Bel Edwards to declare and process a public health emergency until 30 days following the end of this special session.

HB 4 and SB 29 are largely meaningless, as they would cover future public health emergencies which are highly unlikely to play out as this one has. Louisiana is unlikely to have another governor like Edwards again, who has stubbornly and creepily refused to reopen Louisiana despite a clear showing that (1) economic shutdowns are not effective, as evidenced by experience worldwide, in slowing the spread of COVID-19 and (2) Louisiana’s current infection rate from the virus does not justify the continued harassment and impoverishment of our people.

The next governor, and the ones beyond that, are certain to learn from Edwards’ mistakes and go easy on repeating the current stupidity. Current state law is more than adequate to handle a normal level of competence and sanity of the man or woman in the governor’s mansion.

What matters is HCR 9’s passage – or, in the event of its failure, a petition with 53 House member signatures that would dissolve Edwards’ emergency declaration.

HCR 9 was presented to the House as the preferred mechanism for reopening the state, and it had 66 votes when it passed the House. The Senate had the resolution on the floor on Tuesday, and it was amended to cover Edwards’ most recent extension of the emergency declaration – but not given a vote.

This was problematic, and a sign of trouble and, likely, Failure Theater. Because once amended, the resolution should have been voted on and sent to the House. That there was no vote is an indication that Cortez didn’t want one.

In the meantime, this happened…

In a special session called to respond to the coronavirus pandemic, Louisiana legislative leaders are proposing to steer $22 million in state cash to local pet projects, a list crafted behind closed doors that received little public discussion and followed no specific vetting process.

The earmarks tucked into a budget bill could come up for final passage Thursday in the House and Senate. But a first attempt to pass the seven-page list of dollars divvied up to municipal agencies ran into a buzzsaw of criticism Wednesday night from rank-and-file House lawmakers.

“We’ve got a lot of problems, and this is not what I thought I came down here to do. I don’t understand,” said Rep. Kenny Cox, a Natchitoches Democrat. “I didn’t think we had this kind of money.”

Republicans and Democrats, including some on the budget committee, questioned how the list was developed, who made the decisions and why Louisiana was spending its money on municipal sports and park facilities when its unemployment trust fund is bankrupt and borrowing federal money to pay jobless benefits.

“If we’re borrowing money from the federal government that we don’t have, maybe we shouldn’t add last-minute projects,” said Rep. Richard Nelson, a Mandeville Republican. “Maybe the sports complex … maybe that shouldn’t be as high a priority.”

As we’re writing this, the House just voting on HB 39, the pork-filled supplemental appropriations bill that has caused such a hullaballoo. But we’ve heard the House members are not happy even though it passed the House with 87 votes.

Which leads us to the first theory we heard about this that we are not happy with.

Which is that those pork projects which were dumped into the supplemental appropriations bill in the conference committee at the behest of the House leadership, and the ask was that the Senate not vote HCR 9 to passage.

In other words, the legislators paid themselves with pork in order to keep the state shut down.

Several dozen of those pork projects were items which had been vetoed by Edwards following the last appropriations bill. That theory is not outlandish, even if it’s wrong.

There are a couple of pieces of information circulating which lend a little heft to this theory.

The first has to do with a meeting that Schexnayder called with a number of people who have been circulating a petition for his recall yesterday. A Facebook post and thread by one of the attendees at the meeting indicates the character of how the House is currently being run… 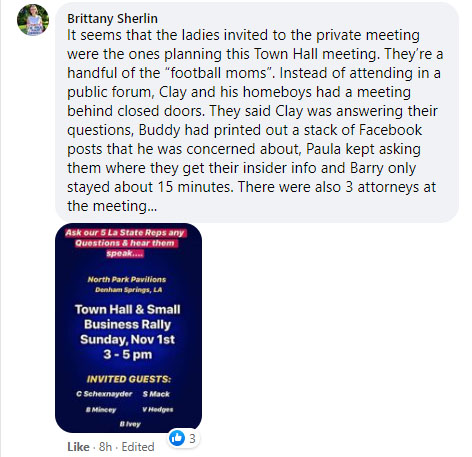 We’re told there wasn’t a whole lot of substance to the meeting and the most prominent thing that was discussed was where those citizens received the information they were sharing on social media. In other words, Schexnayder is more interested in plugging leaks than he is serving his constituents.

If you were actually interested in doing the people’s bidding, it wouldn’t really matter whether you had a tight lid on the information. These are public officials, after all, and their informing their constituents on what’s happening at the Capitol is a public good regardless of whether it’s convenient for Clay Schexnayder. You don’t need Failure Theater if you don’t actually fail.

And if none of this stuff seems to make sense, here’s a piece of information for you – according to his currently-filed ethics disclosure, Clay Schexnayder has no other source of income other than his $33,000 per year legislative salary and what per diem payments he collects from the Legislature. He owned a tire store in Ascension Parish before the 2016 flood but hasn’t reopened it.

We’re not accusing Clay Schexnayder of being on the take. We don’t have any evidence that this is the case. But his personal circumstances and the peculiar way he’s operating during this special session, which so far has made for a flamboyant series of episodes of Failure Theater, are more than a little unusual and certainly would fuel such speculation.

Theory #2 would make for perhaps an even more flamboyant exposition of Failure Theater. We floated this on Tuesday at The Speakeasy, which if you haven’t joined should be your next move… 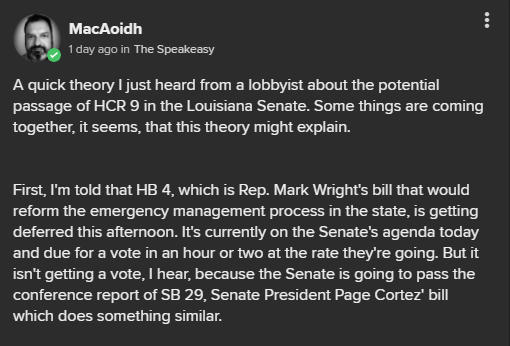 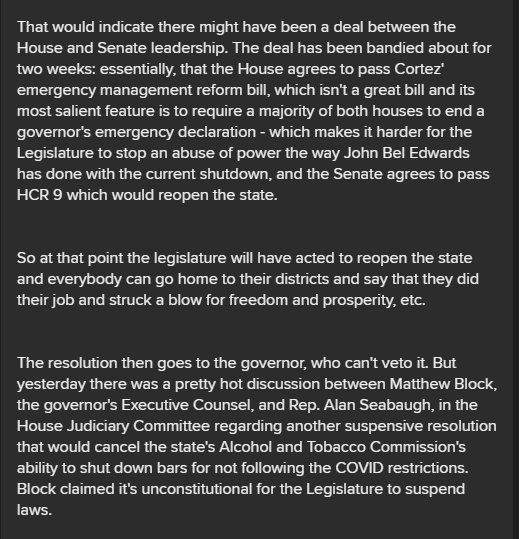 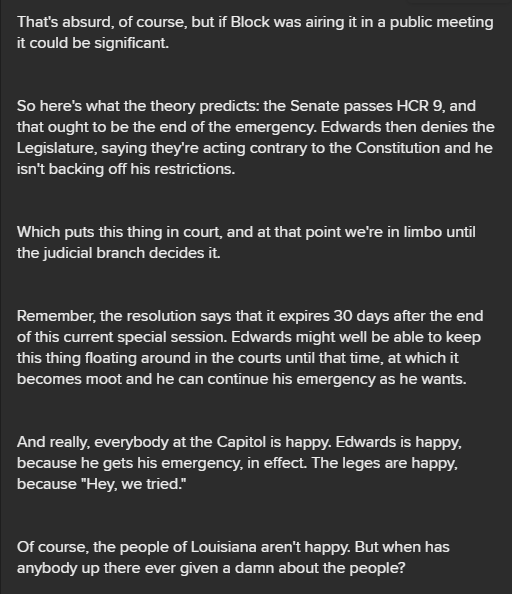 Legally, of course, it would be an outrageous departure from the norm for Edwards to disregard such a legislative act. But as a matter of practice, all he would need would be the bulk of the state’s businesses to operate as though his refusal to accept the suspension of his powers was legitimate.

There would certainly be some businesses who would disregard him, though for example bar owners aren’t just worried about the fire marshal enforcing COVID restrictions; they’re worried about ATC pulling their liquor licenses and various other problems which could arise.

And if all of those businesses knew that in 30 days Edwards would be right back with another emergency declaration that the Legislature does not prevent, why would they rock the boat?

Whether that one would come true or not, we don’t know. What we do know is that HCR 9 has been sitting in the Senate for 10 days now and won’t receive a vote until Monday at the earliest. If it was going to be passed, it would have passed already.

And barring any developments which cannot be reasonably foreseen given this delay, the entire legislative special session is now an unmitigated waste of the taxpayers’ money. This is Failure Theater writ as large as the Louisiana legislature can make it.