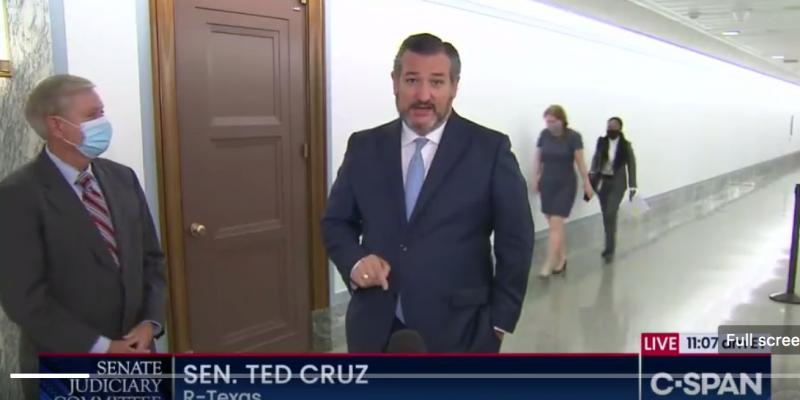 Three Republican U.S. senators said the Senate Judiciary Committee would vote next Tuesday to subpoena Jack Dorsey, the CEO of Twitter, regarding the social media giant’s suppression of information they claim could impact the election.

Once subpoenaed, Dorsey would be called to testify before the committee on Friday, Oct. 23, the senators said.

Sens. Lindsey Graham of South Carolina, Ted Cruz of Texas, and Josh Hawley of Missouri made the announcement after Cruz said he attempted to repeatedly share a New York Post article Thursday on Twitter, which the social media app blocked.

Cruz: Senate Judiciary Committee to Subpoena Twitter CEO to Get Answers on Censorship

On Wednesday, Twitter published on its platform that it was blocking articles published by the New York Post about alleged corruption linking Democratic presidential candidate Joe Biden, his son, Hunter Biden, and a Ukranian energy company.

Twitter said the reason for blocking the article was because: “The images contained in the articles include personal and private information – like email addresses and phone numbers – which violate our rules.”

Also on Wednesday, White House press secretary Kayleigh McEnany was locked out of her personal Twitter account for sharing The Post’s story on Hunter Biden’s alleged hard drive and copy of a 2015 email it published linking Joe Biden to his son’s business dealings.

McEnany shared a screenshot of the message with the New York Post, which stated she had violated “our rules against distribution of hacked material.”

On Thursday morning, the official Twitter account for the Trump campaign was locked, according to the campaign’s communications director, Tim Murtaugh.

Twitter has locked out @TeamTrump for posting video of clips of Joe Biden lying about never speaking to Hunter about foreign business deals.

Biden doesn’t dispute the authenticity of the docs.

“In the last two days we’ve seen a remarkable development,” Cruz said at a press conference Thursday. “We have seen big tech, we’ve seen Twitter and Facebook actively interfering in this election in a way that has no precedent in the history of our country.

“Never before have we seen active censorship of a major press publication with serious allegations of corruption of one of the two candidates for president. That was last night. This morning it escalated and got worse.

“The New York Post broke a second story of a series of emails that indicate yet more corruption and in this instance the Biden family receiving millions of dollars from communist China government officials. Just minutes ago I tried to share that story on Twitter and Twitter is actively blocking right now this instant stories from the New York Post alleging corruption and the Biden family receiving millions from communist China. This is election interference and we are 19 days out from an election.”

The Senate judiciary committee will investigate, Cruz added, “to find out what the hell is going on.”

He said the committee was going “… to find out why Twitter is abusing their corporate power to silence the press and to cover up allegations of corruption. Big tech don’t get to actively censor political speech and actively interfere in the election and that’s what they are doing right now.”

Hawley on Wednesday issued a formal request of Twitter. And the Subcommittee on Crime and Terrorism, which Hawley chairs, voted to request both Dorsey and the CEO of Facebook, Mark Zuckerberg, testify about their companies’ blocking of news articles.

“We believe in a free press in this country. We also believe in free elections and the attempt to rig an election, which is what we are seeing here by monopolies, is unprecedented in American history,” Hawley said. “They have a lot to answer for and I hope that we’ll subpoena both Twitter and Facebook.”

Dorsey tweeted Wednesday, “Our communication around our actions on the @nypost article was not great. And blocking URL sharing via tweet or DM with zero context as to why we’re blocking: unacceptable.”

Twitter also posted a statement Wednesday night: “We want to provide much needed clarity around the actions we’ve taken with respect to two NY Post articles that were first Tweeted this morning.” But it did not post any additional information.

Facebook spokesman Andy Stone tweeted Wednesday, “While I will intentionally not link to the New York Post, I want to be clear that this story is eligible to be fact checked by Facebook’s third-party fact checking partners. In the meantime, we are reducing its distribution on our platform.”